What do you do at an intersection with a stoplight where the power has been knocked out like it has due to bad windstorms in our area recently?  Before you answer that, yesterday a few Detroit area media had a lot on the topic thanks to the authority of the Michigan State Police.  CBS Detroit told us:  " Many of us probably have the same thought: The intersection becomes a four-way stop. But that’s WRONG".  They then explain that regular right-of-way yielding rules go into effect, Click on Detroit even had a video showing yielding rules, citing the MSP reminder.  The Oakland Press had more of the same.  The Detroit Free Press (online) linked to those rules and showed the MSP Tweet that laid down those rules. 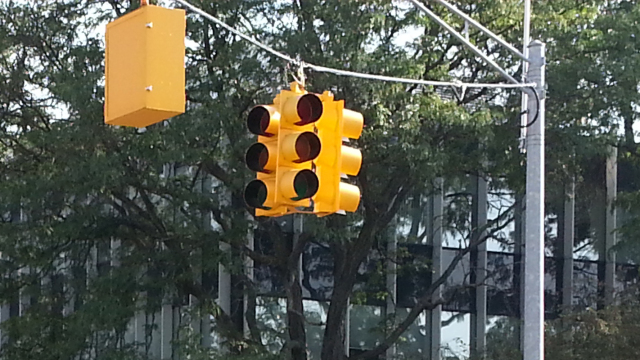 Who has right-of-way at a traffic light outage?

Treat each intersection with a traffic light outage as a four-way yield, not a four-way stop

We've all been there at some point or another.

There's been a power outage in your neighborhood and the traffic lights in the area are all out. You approach one of those intersections with other drivers. What do you do? Who has the right of way?

Most people believe the intersection becomes a "four-way stop." Michigan State Police is here to remind you: That's wrong.

"The intersection reverts back to the basic right-of-way requirements, not a four-way stop," MSP Metro Detroit tweeted Tuesday, ahead of Wednesday's wind storms.

In other words, treat each intersection with a down traffic lights as a "four-way yield" rather than a four-way stop, which would require every vehicle to stop at the intersection even when they don't need to, causing massive traffic back-ups at larger intersections.

If two vehicles enter an intersection on different roads at roughly the same time, the driver of the vehicle on the left should yield to the other vehicle.

Read more on the right-of-way requirements.

Today, many other local media glommed onto the counterintuitive reminder of the MSP like FOX 17 and WOOD TV who also linked to the MSP's Field Update.  Even in 2011, the MSP was saying this was the case and spreading it around to alert drivers of their misconceptions.  But it's not true.

Yes, you heard right; the Michigan State Police are wrong about something which could cost people their lives if they believe it and get in an accident because of it.  Their update and spokesmen are saying:

"When a signal loses power, the intersection becomes uncontrolled and reverts back to the basic right-of-way requirements found in MCL 257.649(1) and (2). It does not become a four-way stop, as is frequently reported in the media."

When an authority publishes something like this it becomes part of the protocol, even if it's false.  It even makes the rest of the authorities who read it revise their original thoughts on the matter.

Why does a four way stop make sense?  Whenever two roadways intersect each other there are warrants for what sort of traffic control your local authority should put up, from no control for light, slow moving traffic on both roads, to stoplights for two well-travelled fast-moving roads.  An intersection with a four way stop that warrants an upgrade after a traffic study is conducted will install traffic lights.

It only makes sense that when those lights fail, the four way stop is the way to treat the problem, not devolve all the way back to a two way yield situation, which the MSP put forth.  Are they suggesting motorists figure out which of the two roadways would be primary when the existing stoplight fails?  The existence of a traffic light in the first place shows both streets traffic volume would be substantial.  There are no "four way yield" situations ever warranted by the standard Manual of Uniform Traffic Control Devices, that some of the media speak of.

Why do all other authorities say that traffic lights are four way stops during a blackout?  In Driver'sEd.com they reflect what makes sense: 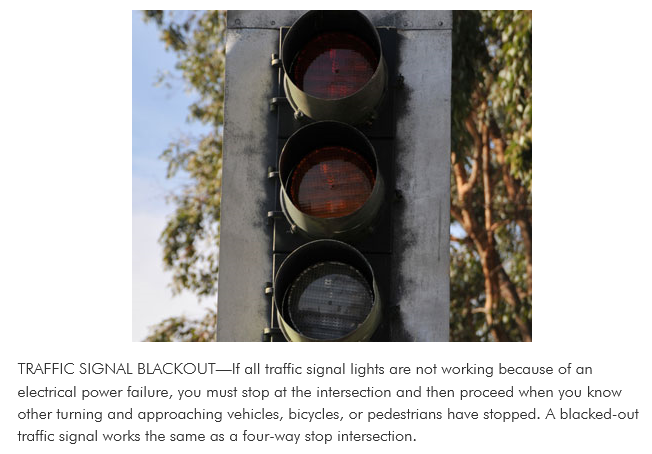 Wikipedia traffic says this is the standard rule in the USA:

Despite all of the years of misinformation given by the state police, WILX reported in 2016 that motorists around Lansing were to treat blacked out stoplights as four way stops.  This is the safest way to do things, and has historically been the way the law has been interpreted, as noted in a 2002 version of What Every Driver Must Know: 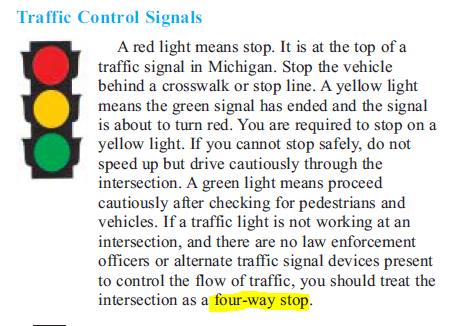 If you have recently learned how to drive, you may  have read What Every Driver Must Know 2016 and read the MSP's advice to observe right-of-way rules: 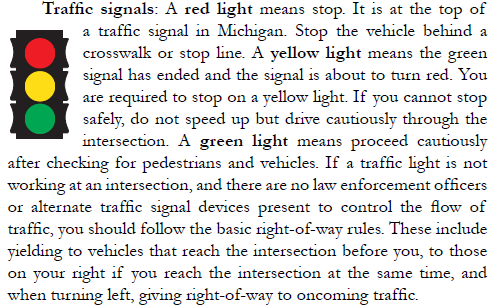 So without any meaningful change of traffic signal or right of way rules, the MSP and Secretary of State's office has went from advocating practicing a safer, more sensible way of approaching a blackened stoplight, into championing a dangerous alternative which they say is supported by the law, but which in reality is not.

Since it seems that the MSP and other state agencies want to contradict what makes sense and counter what driver's education courses, Wikipedia, and other states condone, it is imperative that our state legislators clarify the rules of what to do at a stoplight when the power is down.  Lest we make things even less safe by the confusion of what to do for our state's residents and our visitors when such things happen.

It only makes sense that when traffic lights are out that the most stringent control would apply. Since each set of lights have green, yellow and red then the red light being the most controlling would apply. What the authorities are saying is that the yellow light requirements should take precedent over the green and red lights.

The following populous and/or nearby states agree with you and I:  California, Illinois, Indiana, Wisconsin, (practice test shown above), Ohio, (practice test shown below).  In fact, I searched for a state that may treat it like what our state leaders are trying to push, but could find no other state that did.  This is one clear time when listening to Michigan authorities could endanger your life, especially if you travel to other states and believe they are operating the same way with dark signal lights.

Permalink Reply by Guidothesemipsuedocaptitalistpig on March 31, 2017 at 5:04pm

Growing up in Michigan, I remember being taught and being  asked by my testing officer this question. He expected to hear you come to a complete stop and practice normal 4 way stop right of way rules. This does make sense, as how would anyone know if the other set of lights did not have a normal light showing? Your asking an a lot of the other guy to be psychic and guess the same of your side. It would save a lot of law suits I would think?

You bring up a great point that I missed, Guido:  how do you know that any of the other three directions are seeing a dark stoplight like you?  Yield or stop, it should be easy to judge who was at fault for an accident, so I don't think it will affect most lawsuits, just add up to more accidents.

The legislature is out to clarify the proper way of treating a defective stoplight and their finding is:  treat the intersection as a four way stop.

LANSING, Mich. – Many drivers in Michigan think that when you come to a traffic light that’s out, it's treated as a 4-way-stop. But according to the law, that’s not true.
“We have this convoluted, confusing old law that says yield to the car to the right,” says Republican Senator Rick Jones. It’s a traffic law most people don’t even know about.
“Why don’t we make this common sense?" says Jones. "Why don’t we simplify it and make it the way that people already think that it is and simply treat it as a 4 way stop?”
Jones is behind a bill which passed the state Senate on Wednesday. He says Michigan State Police and AAA is behind the bill...

The same MSP which was defining the law into saying something that it never did:  Four way yields.  Nonsense, that's insanity and not in the law as it currently is written, not in any other state law or the Uniform Traffic Code.  We have to clarify it further so the Michigan State Gestapo gets it right.  These bozos are the same guys that want you to take very fallible drug tests when you upset them on a traffic stop.

This bill is about to be signed into law.  Inoperable stoplights default to four way stops.  Thanks for another good law that likely wouldn't be needed if our crazy MSP didn't adopt a senseless alternative that makes little sense.

Did the legislature catch the last paragraph of this Ludington Torch article a year ago ("...it is imperative that our state legislators clarify the rules of what to do at a stoplight when the power is down.") in the creation of this sensible policy?  If so, they're not admitting it.