In the reader's forum section of the Ludington Daily News, you may have noticed the name of somebody who rarely contributes to the local paper.  After last Monday's March 15 Scottville Commission meeting, I was incensed enough about being muted at this supposed-open-meeting to rifle out a complaint to the LDN's editor, since they had a reporter present at the virtual meeting who may have been able to verify what happened.  One week later, after checking out some of allegations of impropriety, they published it-- with an editor's note of course.  I elaborated and supported my position the day after the meeting in this forum with the incendiary article:  The Denieds of March The LDN's week long investigation seems to verify my findings.  Their reporter saw the prompt to unmute, yet he didn't try to unmute it like me and be ignored.  If he was paying closer attention, and if the video was complete, they would have seen me unmuting.  Both versions of the second comment period do not conflict with mine, except that they did not actively unmute themselves at the prompt, like I did, or raise my hand, like I did at both times.

Commissioner Alway and crew closed the second public comment so quickly the second time, that after I had unmuted myself, yelled without hearing myself in the meeting that I had a comment, I was promptly muted again.  They moved immediately for adjournment, and voted quickly; so quick that by the time I could get emoji's up on my screen (about the only thing I could do), they were one-by-one leaving the meeting.  The LDN also confirms that rapid transition.  I've yet to be contacted by Scottville officials one week later about this muting.

If the City of Scottville's idea was to silence me for this one meeting, they will definitely find out that their actions will only make me more outspoken at future meetings, and they might even hear me roar in the federal courts if they don't start correcting their course.

Whilst in-person meetings are seemingly much easier to manage from a protocol standpoint, these Zoom calls do seem quite easy. You ask folks whether they wish to speak, unmute them (or ask them to unmute), allow them to speak, and then mute again. I don't believe any wizardry is required beyond basic computing skills for those administering the meetings; however, from an attendee standpoint, I can see how if you do not have those skills it would be difficult to get heard in the proper venue. 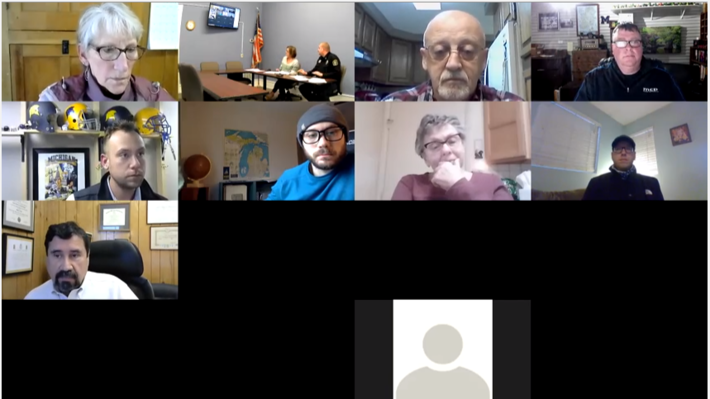 This wasn't my first clown car ride in Scottville, I've attended 3 or 4 other virtual Scottville meetings, spoke up at a couple meetings where differing protocols were followed, used the background 'chat' feature to ask probing questions with officials and talk with other attendees, but at this meeting, the 'chat' was disabled and somebody actively shut out my video (and apparently, audio) features so I could not participate.

It's extremely unfair, since the screen shot above (taken early at the last meeting's video) shows Scottville citizen Sue Petipren (who was Scottville's best commissioner in the short time she served in that role) with a video feed and active audio on line with the officials, while you wouldn't be able to tell that both Riley Kelly of the LDN and myself were connected via Zoom with audio & video disabled, as were others.

Somebody at Scottville actively disabled the 'chat' feature which had always been on before, someone continued to block video feeds of citizens (except for Ms. Petipren), and at the end when I unmuted myself and yelled that I had a comment, it didn't come across in their audio of the meeting nor did I hear myself when it was live.

Epictetus, this was a series of  intentional acts designed to not let me (and possibly others) comment, and if you know me by now, the official(s) who allowed this to happen have committed an act of war against the public, and I will solemnly prepare myself towards being a worthy opponent of their tyranny. 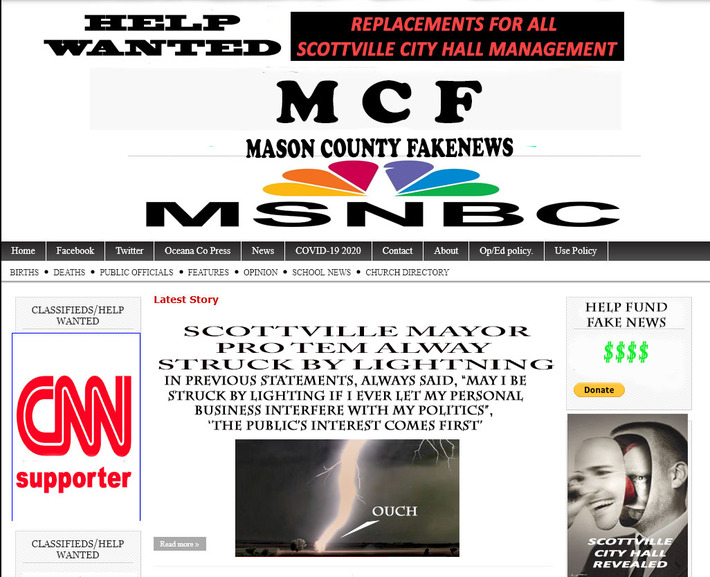 The American Community Survey has the population at 1194 as of 2019.