"Beware the Ides of March!" the soothsayer warns Julius Caesar in the Shakespeare play bearing the same name as the doomed Roman emperor.  A mere two acts later, multiple Roman officials stab their leader to death.  "Liberty, freedom, tyranny is dead.  Run hence, proclaim, cry it in the streets.", says Cinna.  Cassius adds:  "Some to the common pulpits and cry out, 'liberty, freedom and enfranchisement'."

Other officials involved chimed in with similar rhetoric, ironic in that they had just participated in a heinous assassination which precipitated the end of the Roman Republic.  You see, Julius Caesar was popular among common Romans, he was officially deified two years after the foul deed, and his assassins fared poorly thereafter, as noted in the anticlimax of that play 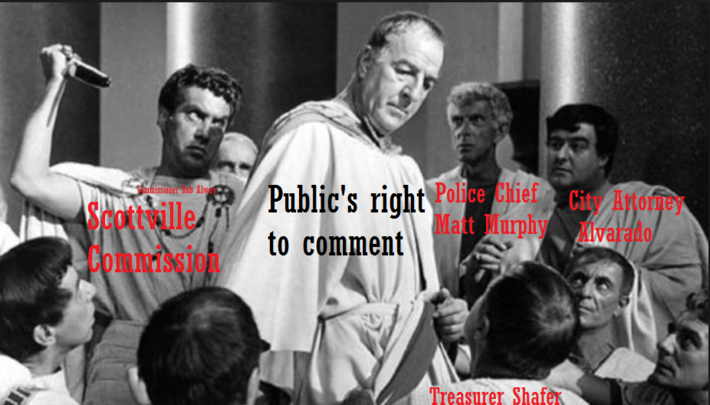 March 15th is the Ides of March, and the Scottville City Commission met virtually at 6:30 PM on this night in 2021.  They gathered together in a 21st Century night of the long knives and killed the public comment period at their meeting.  Here is a brief account of what happened, and its immediate aftermath.

Mayor Marcy Spencer was absent this evening, it's unknown at this point whether other Scottville officials had her taken care of earlier that day, but it is known that they had previously assassinated the career and character of former Scottville City Manager Courtney Magaluk.  This left Mayor pro tem Robby Alway with his first command of a commissioner meeting.  They led off with standard agenda items before coming to the first public comment period.

I had a comment based on three things:  1) an issue regarding the bidding process they used to pick the company tasked with finding Magaluk's successor, 2) a reiteration of the unrefuted fraud and embezzlement practiced by the treasurer and police thief chief, and 3) a correction of the faulty summarization of my prior public comment at the last meeting in the minutes.  Alway asked any member of the public present to unmute themselves and raise their hand.  I unmuted myself and raised my hand.

When Alway apparently hadn't observed me unmute myself and when he couldn't see my raised hand because my video feed was blocked by him and while he moved to end the public comment period, I spoke up-- but I could not hear my words in the audio.  I was summarily muted.

Somebody during the time between the last meeting and this meeting had also disabled the chat feature, which allows for private communication between attendees of a Zoom meeting.  I confess that I have used that feature to heckle Police Thief Matt Murphy and Treacherer Kathy Shafer (when she appears at one of these meetings and claims overtime for the bother of doing so) as to their criminal activity.

Apparently they decided to silence me and likely others at this meeting, and as they say, silence is violence.  The rights afforded by the Open Meetings Act are clear even when the meeting is virtual:

MCL 15.263(5): A person must be permitted to address a meeting of a public body under rules established and recorded by the public body.

At prior virtual meetings, Scottville officials conducted their public comment periods differently and more inclusively.  The first meeting I spoke at and before that, every attendee was asked individually whether they had a comment.  The next meeting I spoke, all I had to do was unmute myself, by their grace they allowed my video feed.  This meeting they apparently didn't want to hear or see me.  They did allow former commissioner Sue Petipren a video feed for the first part of the meeting, but none of the handful of others present.

Their last piece of business was a FOIA appeal initiated by myself.  It concerned a 2-16-2021 car-pedestrian accident in Scottville that left a local lady septuagenarian bleeding on State Street while the motorist drove off until caught many miles away from the crime scene.  It has common citizens wondering many things, especially the name of the hit-and-run driver and why he isn't being charged.   I sent out a FOIA request eleven days later for the police incident/accident report, since Scottville Police Thief Murphy was in charge of the scene and disseminating information about the crash immediately after it happened.

My FOIA response said everything (including all of the information Murphy disclosed) in the police report was exempt from disclosure for the lame reason that it would interfere with law enforcement proceedings.  The law and court precedents do not recognize this as a valid denial, nor did his claiming it as still being an open investigation make any legal difference.  I explained this in detail with my appeal, no effort was made by City Attorney Alvarado to deny my reasoning or explain why his was right, but he did take the extra effort to have the commission extend their time to respond since their next meeting is more than 10 business days after their receipt of this appeal.

This extension makes this simple request for a police report mostly prepared on February 16th and requested in that same month, available no earlier than April 5th.  I anticipated this would happen in my second comment, since the commission has proven themselves lawless over the last few months in their actions and demeanor.

This time, Commissar Alway instructed those who wanted to speak to unmute themselves and be recognized.  I unmuted myself, raised my voice to say I had a comment, but it never came across.  As he quickly shut down the comment period, I looked around for some way to communicate my desire to talk as they moved to adjourn the meeting.  I was able to get some icons appear on my black square but that was it, as everybody left the crime scene.

Some people might not like what I have to say or might not like how I say it; if that includes you, I apologize, but it's often the best way I can think of to get the facts and their relevance out there.  I do not like dirty officials and politicians, it doesn't matter if they're on the deep right like State Senator VanderWall, deep left like Governor Whitmer, or anything in between like you have in Scottville's currently elected cast of clowns who fail to represent the public they supposedly serve.

When these 'public servants' deny non-exempt public records to be timely disclosed it's bad enough.  When they go one step further in shutting down and shutting up a vocal critic of their criminal acts by twice refusing to let him speak at a public meeting, they have gone beyond being contemptible.

Permalink Reply by Freedom Seeker on March 16, 2021 at 12:28pm
Appaling actions in Scottville. All I can think of is that Julius Caesar, it is said, was stabbed 23 times and is dead. But the words we have been told "You too, Brutus" (may have been, "you too child") is the epitome of betrayal and gang mentality and that seems to go on today in certain localities. I hope Scottville learns better democracy.

"The supposed last words of the Roman dictator Julius Caesar have been the subject of debate among historians and has been speculated about for centuries.[1] There have been several phrases and words identified as possible options and the different interpretations of the meaning and implications of each one has also varied greatly;[2] he is thought to have either spoken Latin or Greek in his final moments, and generally the Greek language phrase "Kaì sý, téknon", Greek: καὶ σύ, τέκνον (meaning: "You too, child"), is the most popularly accepted option.[3]" From Wiki.

It's to bad Scottville citizens must put up with these officials but I think the most egregious of them all is Alway. He should be writing this article about the corruption and getting the message out to the folks of Scottville. To say he has failed miserably at keeping his priorities straight is an understatement.

Scottville's City Hall is turning into a mess. Someone needs to be fired. My message to them is to just look at what you are doing and clean up your act before the taxpayers storm the town with pitchforks. The Clown Band has built up a great reputation for Scottville over the years and it has taken City Hall a very short period of time to tarnish that reputation. 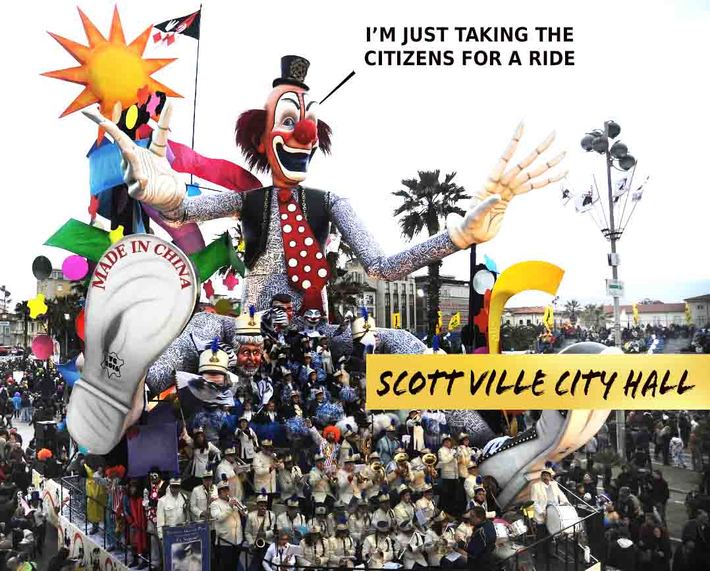