At the May 9th, 2022 meeting of the Ludington City Council, they went into closed session to discuss settlement issues of the case Niesen v. Fort.  Talking with other media sources at the time, they were in the dark about what the lawsuit entailed, but we were in agreement that the 'Fort' part of the lawsuit likely referenced LPD officer Mike Fort, who had actually been at the April 11 meeting held just four weeks earlier.  At that meeting, Fort's oldest son had the ceremonial privilege of pinning a badge on his father, who had just been promoted to sergeant.

Once the closed session ended, the council voted to settle the lawsuit, with only Councilor Ted May opposed.  As is typical with such affairs as it detracts from the city's other narratives, they avoided mentioning any details to the public regarding anything about the lawsuit.  Fortunately for the public, almost all records retained by a public body are considered 'public records' and are available through the FOIA process.

I therefore asked the city for the various filings they received and gave in this case along with the settlement agreement that all but one of them agreed was fair to both parties.  The first response lacked anything regarding the settlement agreement, so I looked through all of the materials given and reminded the city that the Michigan Supreme Court has recently confirmed that settlement agreements made by a public body have no FOIA exemption thereon-- nothing preventing the public from finding out what sort of deal their elected representatives worked out.

Among the non-settlement materials I received originally, the most enlightening was the Complaint, which described what the lawsuit was all about.  Court documents of the case basically just show process of the case through discovery and some minor motion hearings.  But in the complaint we discover that the lawsuit was filed in May, 2021 describing an incident that the plaintiff had with then-LPD officer Mike Fort.  The lawsuit explains the unorthodox action by Officer Fort that led to the federal lawsuit claiming an egregious violation of Jessica Niesin's rights under the Fourth Amendment (which allows protections against unwarranted search & seizures by agents of the government). 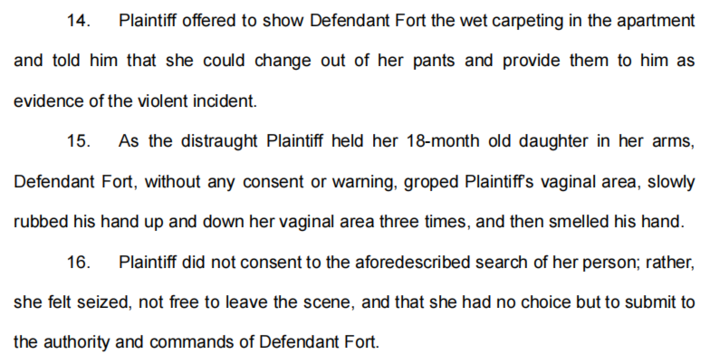 One cannot find the action Mike Fort took that day in any of the City's police policy manuals, or any other police manuals you could think of.  Officer Fort may have had some reason to disbelieve Ms. Niesin's version of events, but it is an incredible mistake of judgment on his part to invade her 'privacy', compound the invasion by lingering there and repeating his mistake, and then just plain weird to smell his hand afterwards.

Let's not forget that this woman had just allegedly experienced an incident of domestic violence which frightened her so much that she lost control of a bodily function.  To endure a police officer's illicit investigation on the victim's private parts who effectively denied her basic right of bodily integrity is worthy of a federal lawsuit.  Especially when you can bet that the LPD wouldn't hear her complaint and take action against the offending officer.  For proof of that just look at the promotion the LPD gave Officer Fort just four weeks before they settled this lawsuit against him.

I joked then that I wondered what trouble Sergeant Fort had gotten into, since I've seen the scenario several times where an award or promotion is overtly given to an officer who has done covertly something extremely troubling that either led to or should have led to a lawsuit.  The settlement with Ms. Niesen which the City of Ludington's FOIA Coordinator Carlos Alvarado originally tried to claim "did not exist", mysteriously came into existence once the City was reminded of its non-exemption was finally released shortly thereafter:  Executed release 5_23_2022.pdf  It appears that Ms. Niesen and her attorneys are $55,000 richer:

Adding insult to injury, the LPD now has a sergeant who made an incredibly bad choice in the Niesen case, made similar mental and Constitutional errors in the Kimberly Septrion case, and didn't have the common sense to protect himself during a blizzard back when he was on the sheriff's department.  This guy will now be making command decisions for others on the city's patrol.

Lastly, consider if you or I would have committed the non-consensual contact he did on Ms. Niesen, we would be facing criminal sexual conduct charges and having to hire a defense lawyer or have a public defender.  Not only is Mike Fort not going to be charged with any kind of crime, but he was charged in his individual capacity, in a civil case:

Were you to be defending yourself, you would have to retain your own attorney (there is no right to counsel in most civil cases in Michigan) and pay your own legal bill.  Mike Fort didn't do that, he had you pay for the legal defense of his indefensible criminal sexual conduct, because even without a vote to do so, the city council took all legal liability of Mike Fort sued in his individual capacity.  And they apparently didn't have a lot of confidence in his innocence, since they abandoned proving that once they decided to settle and paid off the $55,000.  And it may have remained "hush money" if FOIA Coordinator Carlos Alvarado was allowed to maintain that a settlement agreement approved by the city council in open session did not exist.

Did Fort actually do what he is accused of or is this a he says she says situation? If he actually did what is claimed then why is he still working for the City and not facing charges? It also seems strange that if it can be proven that Fort is guilty why is she settling for such a small amount? After paying her attorney his cut and fees she will be lucky to end up with half the money awarded. Something just does not add up.

Now that the case has been settled, we may never know.  I will try to get the police report on this incident to see whether Fort or his partner can offer a different perspective or admit that such contact occurred.  If this interaction was caught on body cam or even dash cam it would be a slam dunk for the plaintiff (if what she said was true) or the defendant (disproving the claim), so I'm betting that doesn't exist in this case, or mysteriously lost.

Willy, you make some very good observations and points here. For me anyhow, it's simply amazing and shocking this ever happened. Why would any LEO do this? And in Ludington? Could have simply took her word, or taken pics.. Where is Fort from to start with?

Questions: why would any LEO want to use the smell of urine on his fingers as evidence? Why would he touch a complaintant's private parts to do so? Isn't there some sort of regulations in the manual against ever doing this to start with? Did another officer witness this too? Did the suspect witness this too?