In Gretchen Whitmer's Michigan during her reign of the coronavirus, you really don't have to look too close to fully understand that the orders that she places on individuals and private businesses do not apply to her or the big government monopoly she wields.  After Covid-19 deaths peaked in Michigan in April, they have steadily came down and even with some very questionable death-labelling throughout, residents have unquestionably been deep on the right side of the epidemiology bell curve for months now.

That hasn't stopped her from her record-setting pace of executive orders of dubious merit, including EO 2020-160 issued last Friday, effectively resetting restrictions placed on the State during the earlier parts of the virus crisis, among them a reduction of the maximum number of people engaging in indoor and outdoor public gatherings. 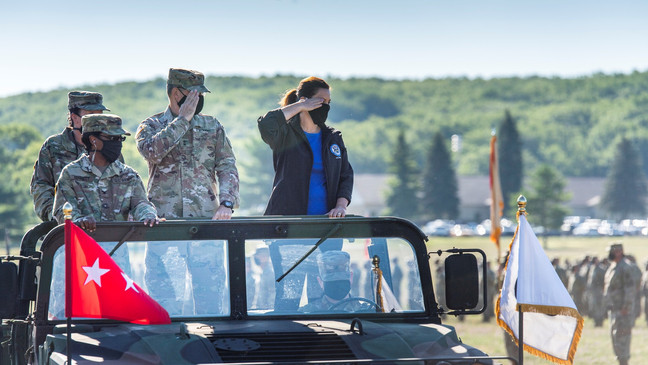 The ink was barely dry on the EO when she visited Camp Grayling in order to participate in a ceremonial inspection of troops at the Michigan National Guard’s Pass and Review, a gathering which had 720 in attendance.  Even considering that the event took place in a Whitmer-created portion of Michigan claimed safer than the rest, the event could have at most 250 people around and not violate her order that went into effect 9 hours previous.

A week before her restrictions, private Hillsdale College held graduation ceremonies despite a threat from Attorney General Dana Nessel using some of Whitmer's other EOs to stifle that gathering, even when the college meticulously took steps to limit exposures.  Nessel had nothing to say about Camp Grayling or when the governor marched with many hundreds of protesters the month before.

Nor was there any concern for a strictly ceremonial commemoration of former Michigan Governor Bill Milliken held just yesterday at Interlochen attended by up to 500 people, including the current governor as a speaker.  The venue appears to be a mostly enclosed, canopied auditorium, but even if it was classified as being 'outside' it still does not allow for the participation of over 250 people.  Whitmer marveled at Milliken's ability to 'bring people together', as she limits most of Michigan to indoor gatherings of 10 people or less, despite precautions.  Those rules apply to you, but if the governor is part of your plans, consider them relaxed.

Whitmer and Nessel showed right out of the box that they were going to be serious about EO #160, threatening private Michigan's Adventure Amusement Park with a shutdown less than two weeks after they were finally allowed to open.  The governor's spokesman clarified that shutting down amusement parks like MA was part of the order:

"Amusement parks have long been closed across most of the state, including in the Grand Rapids region. Water parks chose to read the governor’s prior orders, however, not to apply to its activities. This latest executive order clarified what should have been clear all along: their doors must remain shut for the time being to protect the public health of Michiganders."

So even though the park is set to remain open it is not going to be able to do so without a ton of harassment and potentially a lawsuit from state and local officials, barring any desire from the governor to spend some time at the facility.

The spokesman, however, made Governor Whitmer's intentions fairly explicit about water parks in the GR region, which Ludington is.  Even if one does not accept the general fact that splash pads are effectively water parks for younger kids, maybe they would accept what they see on Facebook when they look for local water parks:

Unlike the profit-seeking-to-stay-in-business Michigan's Adventure, however, the Ludington Splash Pad is ran by a public body, the City of Ludington, a political subdivision of the state, so they would fly under the radar for this order.

As news agencies were reporting on the inevitable shutdown of Michigan's Adventure, local publicly-ran 'water parks' and facilities of similar recreational character were being allowed to remain open.  A rational person would see this as blatantly unfair, about as unfair as choosing 'unessential' businesses to close down their doors needlessly, and for many of those businesses, terminally.

In fairness to private businesses, the Ludington Torch weighed in, reasoning that the Ludington Splash Pad should have to live within the same rules being applied to Michigan's Adventure and other water parks.  When they ignored our call to action, we contacted the Attorney General's office and the local health department.  Their initial ruling was that it needed to be shut down, which was accepted by the City's legal counsel, and the City did just that, for a day, until they used their own state resources to fight back.

When the Ludington splash pad reopened, it issued this statement:

"In working with State Representative Jack O’Malley, State Senator Curt VanderWall, and District #10 Health Department, the City was able to receive clarification from the State that the Splash Pad may continue in operation as long as social distancing/health department guidelines are posted appropriately."

In so doing, the Ludington Torch's objective of getting a level playing field for privately and publicly ran 'water parks' was met.  The State can no longer objectively say that Michigan's Adventure cannot operate if they meet those same standards that apply to the Ludington Splash Pad.

It has been amusing, yet a little intimidating, getting threatened by individuals from all sides of the political spectrum with violent rhetoric over contacting a state agency to look into closing another state-subdivision's facility down using the governor's poorly crafted edict-- which was being used concurrently to shut down a private business and potentially killing a lot of West Michigan jobs.

If you have no qualms about our government shutting down private businesses on a whim, but a lot of qualms about somebody looking to upset the government's policy of using double standards to distinguish the importance of their operations over everybody else's, then perhaps you should reevaluate your qualms.

Good explanation  X of equality b in applying the executive order to Michigan Adventure as well as the other examples of the gov failing to follow her own orders.

Your action got a lot of local Karens calling you a Karen spitting mad and demanding their luxury of a free splash pad opened up.   If that energy could be exercised for other issues that benefit all, like sewer, sidewalks or roads, things might get done.  It illustrates the lesson of not getting between a momma bear and her cubs.  That's just what about 20 - 25% (guessing by wiki demographics of Ludington ) of the fraction of those who secretely pushed the splash pad through.  Of course however we are serving many young tourist and non-city families that have risen up in revolt.

Thanks for your understanding of the situation.  Those who know little about me, seem to lump me in the Karen category for wanting to 'cancel' the splash pad, failing to realize that both city and state officials would inevitably save the splash pad in order to reap the political benefits from doing so.

So whereas the end result of the splash pad re-opening (or staying open) would have been about officials figuring out ways around the executive order, which would ultimately help in keeping other water parks open despite the tyrant's orders, they get their own bonus of tainting the opposition through selling a false narrative.  Somewhere, John Shay is smiling.

Permalink Reply by Freedom Seeker on August 7, 2020 at 7:18pm
I would think that John Shay is smiling for many reasons besides continuing the malice against X: a good pension from the COL, someone else to try to fix his neglect of the sewer lagoons and the Bayou and all the other neglect of city sewer, roads and sidewalks, gone to a city that has a much better financial picture, with less responsibility, and not having to put up with Rotta. He should have a big smile under his mask.

The frown belongs as much on city council ignorance or complicity to allow our city into this condition and debt. But Ludington is a wonderful tourist destination. If only the tourist would pay off our debt and quit raising our water fees, it might be a good place to reside.

This Karen business is new to me. We used to call these Karen characters, like Shay and Whitmer, jerks. X is correct, by opening up the splashpad they have established a precedent. Again, where the hell are the Republicans who promised to stop this mad woman. Can anyone imagine this vindictive, radical leftist being in charge of any kind of military establishment. She sent the police in to give citations to people for protesting to end the forced shutting down of their businesses and the economy, then marches and kneels with the Marxists, Black Lives Matter. 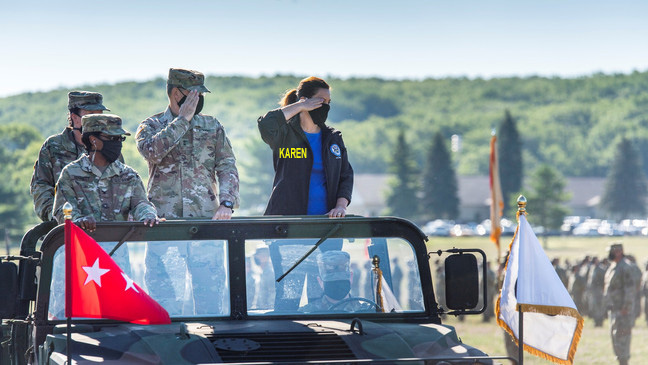