On the morning after the Ludington splash pad reopened, after being closed for a day, I took a walk down through Copeyon Park to check on it and some other things.  Truth be told, I had went there the night before and seen a couple of dozen geese reclaiming that area for themselves in a rather bold move on a cool summer night.  At shortly after 9 AM, I looked at some of the evidence of their visit. 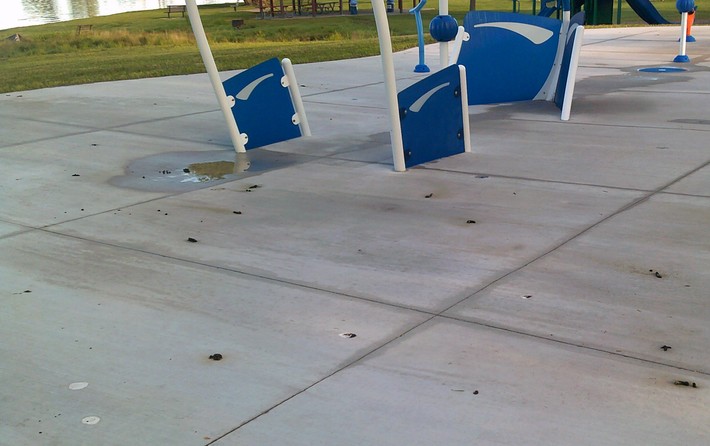 There are no trees shadowing the splash pad, so the white, brown, and multicolored splotches on the pavement are variations of geese excrement.  There are easily two dozen of those droppings in the picture above taken from just a little southwest of the facility.  The one taken below is from about 20 feet north and shows a few more.  These areas were the hardest hit, but there was a lot to go around, showing up in practically each section. 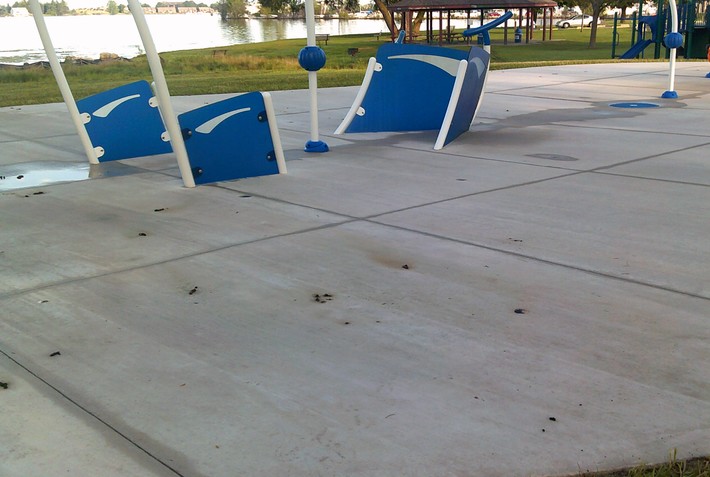 As the governor issues orders to fight an invisible microscopic enemy, and Ludington businesses and individuals deal with being shut down to a certain extent over the last six months as a result, the goose invasion of the splash pad offers many hidden dangers of its own. 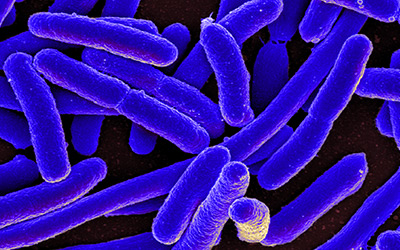 - E Coli comes in several virulent strains that cause gastroenteritis, urinary tract infections, neonatal meningitis, and Crohn’s disease.  E Coli contamination takes a heavy toll on any individual, but could prove debilitating or deadly to children and seniors.

- Salmonella causes Salmonellosis, which results in diarrhea, fever, and abdominal cramps, usually within 12 to 72 hours after infection, lasting 4-7 days.  The infection could spread from the intestines to the blood stream, and then move to other areas of the body. Failure to treat such an aggressive infection with antibiotics could result in death.

- Campylobacter is considered the most common bacterial cause of diarrhea.  It’s estimated that between 5%-20% of people with an infection develop Irritable Bowel Syndrome (IBS) for a limited period of time, while 1%-%5 can develop arthritis.

- Coccidia can be contracted by younger or older pets making contact with goose poop.  It can cause severe, watery diarrhea, dehydration, abdominal distress, and vomiting.  Less common types are potentially infectious to humans.

- Giardia is a microscopic parasite that causes a diarrheal illness know as giardiasis. Common symptoms include: Diarrhea, gas, abdominal cramps, nausea/vomiting, and dehydration.  In children, severe giardiasis might delay physical and mental growth, slow development, and cause malnutrition.

Children are at great risk from goose droppings for two big reasons.

Masks and social distancing will not protect your youngster from these bacteria, spores, and parasites, so the ultimate protection has to come from the provider of the splash pad and those who would let their children use it.

And this morning it appears that somebody informed the City of Ludington that there was goose poop all over the splash pad and its entrance, for when I reviewed the situation two hours later, the City DPW had a crew out power-washing the walkway, after appearing to have done the same with the splash pad, as it was in operation.

A couple years ago, multiple citizens informed city leaders that geese will be a major problem if the splash pad goes into Copeyon Park.  They were absolutely right; so be advised that if you go to the splash pad early, or on a cooler summer day when it may not be used, that there may be invisible enemies that you have to deal with before you let junior scrabble up that hill.  For geese have likely did the same during the evening.

Excellent report X. In my opinion the splashpad should be closed due to the contamination of goose sh_t. Not only on the pad but in the grassy area surrounding the pad. The entire area needs to be thoroughly disinfected each day before use and the geese should be excluded from the area. This is another bird brained idea that has gone wrong and will be costing the taxpayers. If some sickness breaks out will the City be open to lawsuits? I wish I could say those in charge of Ludington act like adults but it appears that a child like mentality motivates Ludingtons elite. This splashpad at it's present location is just wrong. They knew it but the citizens be damned. Another thing is that dam_ned entrance hill. I watched people pushing their bikes up trying to exit while trucks towing boat trailers and other traffic were on it at the same time. 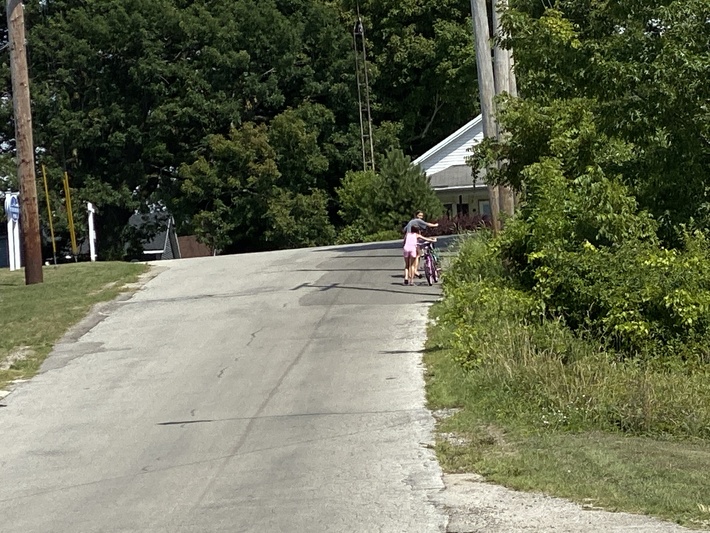 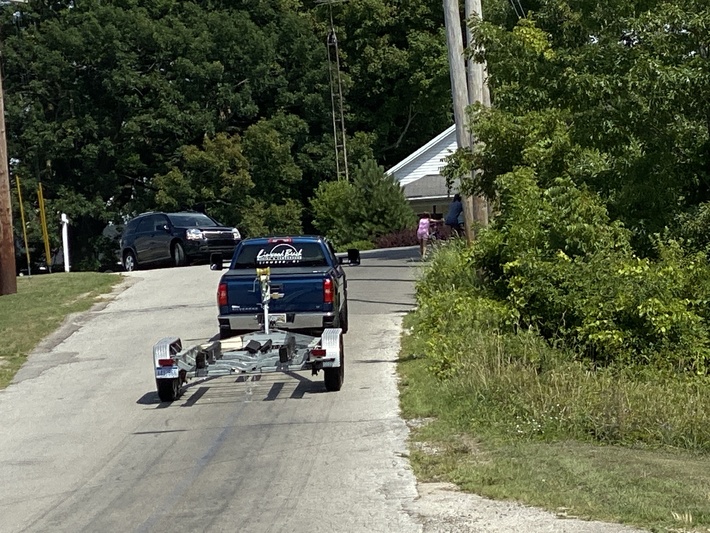 Good pictures, the second one shows one of the many concerns raised about the splash pad's location, in that there is only one entrance/exit to the park and it's barely wide enough to provide two vehicles to pass each other safely, so with the predictable increase in pedestrian and bicycle usage going up or down a steep incline with absolutely no shoulder available on either side, it's only a matter of time before something goes wrong.

The geographical features of Copeyon Park do not easily permit bicyclists/pedestrians to access the park and present a major hazard for the handicapped should one decide to use it, let alone try to leave.  The construction costs needed to make it ADA compliant and safe for non-motorist use is prohibitive, and likely will never be done.  The geese and their inherent territorialism should have also led the planners of the SP towards somewhere else, but, nope.  It was a done deal in committee hearings that only splash pad members and compliant city councilors attended.  People who were ignorant of the challenges of placing a SP in Copeyon Park were making the decision to put a SP in Copeyon Park when better spots were available.

Permalink Reply by Freedom Seeker on August 8, 2020 at 12:43pm
Very true about splatter pad needing daily cleaning. I walked there today after it had been in use yesterday, and bird doo (looked like seagulls and goose and who knows what little skinny black turds), so we'll have to destroy all the seagulls too?

I think it's more of an arrogant attitude "damned be what the citizens say" rather than a "child-like" mentality. Maybe you meant "childlike" as in education? I think of what the bible says about being "childlike" as in "teachable and humble," and that the city people (mostly) have been far from.

Excellent pictures of the issue of "kids just riding their bikes down the hill" or "up the hill." It's good exercise, but needs a sidewalk so as not to have an accident with a boat hauler. I think John Shay said that "the city is immune from liability" or that's the stance they've taken. That's probably why the "private fundraisers" turned it over to the city. It can then fall under the big city insurance! But I say goodluck with not being liable if an accident (God forbid) happens. The whole thing was so secret, rushed through, not thought out and not enough concern for public comments, even though they claim they were working so hard on it for "seven years." Never had any public input, never went through city council until the last month.

Seagulls poo splatters while a goose's poo are the skinny black turds. As far as the childlike reference, you are correct, I should have used "childish".