At the August 10th meeting of the Ludington City Council they will be deciding whether to add parking spaces by the beach at the west end of Ludington Avenue.  Before you get too happy, they are not going to revert the $600,000 plus West End Project back to the utilitarian way it was.  Instead the plan is to create eight diagonal parking spaces between Stearns Outer Drive and Lakeshore Drive.  The council packet itself does not illustrate what it would look like, but here is what it should resemble (with diagonal parking spaces in the red parallelogram zone): 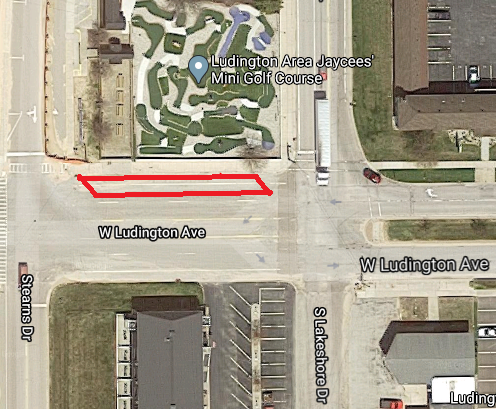 Traffic Control Order # 181-A is being introduced by new LPD Chief Tim Kozal, and looking at all of the various standing committee meeting notes and other boards, this is the first time this idea has come before the city council.  On pages 27-28 in the packet he claims he is changing the parallel parking to diagonal parking in order to facilitate eight more parking spaces; the goal of TCO 181-A is to create additional parking.

There arise a couple of issues here.  The first is that the current road 'space' that is claimed to be parallel parking: it isn't.  It has never been striped to indicate it was for parking, but, more importantly, it can't be used for that purpose simply because of its dimensions.  Any car that is parked there cannot be even close to fitting inside the limit line.

Notice that the equal length black lines above indicate that this is the case.  Even parking over the curb, the outside of any vehicle would still hang a foot or more over the line.  This portion of the highway is not for parking, it's at best a shoulder, best suited for a bicycle lane.

Therefore, this is not a reconfiguration of parking rather the creation of new parking.  But the creation comes with the destruction of the rightmost lane of Ludington Avenue between the two streets for traveling and making that lane populated by parked cars.  This presents a new danger to traffic coming out of Stearns Outer Drive, who currently have a stop line where they would be hard-pressed to see oncoming traffic using the remaining lane coming west. 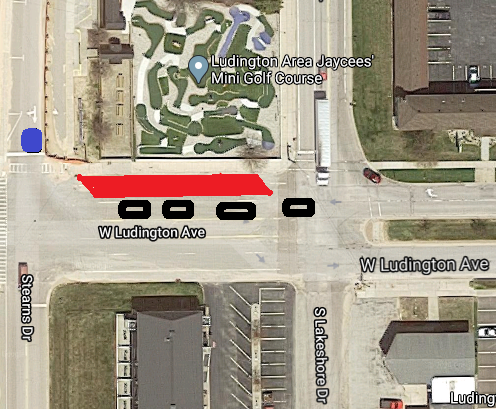 Consider the blue car coming to a stop and looking eastward and assume the parking lot is full.  The four black cars would not be visible to them, whereas in the past it would be.  So as they move forward they may be surprised to find themselves in a collision.  This can be extra dangerous for the beach patrol in their ATV or others riding in their golf carts or bicycles.

One should not be surprised that beach parking is needed, the City created that need by changing the west end into what it is and eliminating dozens of parking spaces.  This doesn't seem to be a safe alternative, and I hope the council questions the new chief on his 'reconfiguration' and any type of traffic warrant he used to decide that this was not as dangerous as it appears.

From the pictures provided, it looks like the city is trying to make parking in the U.S. 10 roadway and I wonder if they have that authority? (The red line probably not to scale, but it appears in the roadway). It seems they have cars backing into U.S. 10 to exit. I wonder if they got approvals from MDOT to propose this? Didnt they try that further east downtown and it wasn't allowed? It seems like it does create more of a cluster and site hazard. To me, a maddening example of poor planning to spite public comment, and then trying to fix the mess later. Maybe some more of those blinding short lights will help the situation. Maybe the stop signs can be moved out into the roadway to meet a new site/stop line.

Are 8 parking spaces really worth endangering the citizens and visitors of Ludington?

Why is the police chief getting involved in adding parking?

Last time I checked, we had more than enough drug, drunk driving , and assault incidents to keep him busy. Maybe he should spend more time on those.

That should only be determined after conducting a study of all relevant factors, applying traffic science, followed up by the fair presentation of results before the council and the people of Ludington so they can make an informed decision.

Great question; the documents provided shows that this search for additional parking appears self-initiated, but the police chief as a traffic engineer shouldn't really be looking to reconfigure parking (or create parking opportunities) as part of his job, rather they generally are used for measuring the feasibility of proposed parking schemes of other people, groups, and committees.  That's what I think was done here even though it's not mentioned.  I can see the Jaycees liking the additional parking for their mini-golf and the City's intelligentsia wanting extra parking for the West End slab events when they finally happen.

Don't forget that westbound US 10 turns south at James Street, and that M-116 continues until it too turns out from Ludington Avenue at Lakeshore Drive.  The avenue beyond that point is City of Ludington jurisdiction, no MDOT approval needed.

On review of the site, I found that the existing lane that is said to be for parallel parking is just short of 6'.  In comparison, the dedicated parallel parking on James Street is just under 10'.  I must revise my earlier assessment to say that a small car could conceivably fit in the space if it didn't mind parking its wheel right on the curb and having its rear view mirror pointing into the traffic lane.  Trucks can forget about it.

There is an easy fix to this that would allow more parking and provide even more safety than before, but I dare say it publicly, lest city leaders treat it like the CDC now treats hydroxychloroquine.

Permalink Reply by Freedom Seeker on August 10, 2020 at 10:39am
Thanks X. I thought U.S. 10 went west right to the lake, and is in line with U.S. 10 in Manitowoc and that the car ferry was in its time an extension of U.S. 10. Also because I thought there was some mention about the west end lights etc. needing MDOT approval. Sorry for any wrong assumptions. But you are saying diagonal in some argument and parallel parking in others. Which is it. If there is a reasonable solution, why not spill it for consideration?

No, the end of US 10 goes right to the SS Badger carferry, hence your car technically stays on US 10 as it crosses and you may see US 10 be represented as dotted lines on maps going across the lake. 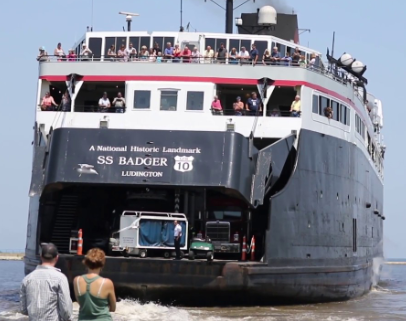 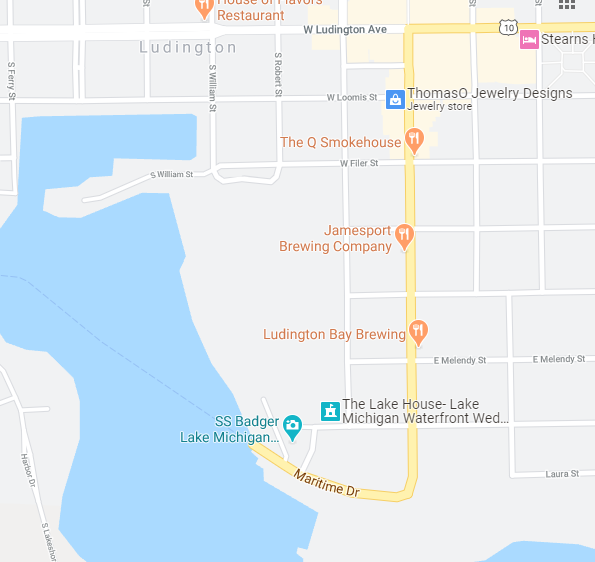 I think I have been consistent with diagonal (aka angle) parking and parallel parking, please advise if I was tripped up somewhere.  The chief proposes to put diagonal parking where there was a lane sometimes used for parallel parking, but ill-suited for it due to width.

The solution I propose should be evident to those who have a knowledge of rudimentary regulatory sign placement and their applications.  The simple, almost cost-free, solution increases traffic flow along with safety and allows for diagonal parking in the area.  It will also be overlooked because in many ways, it's too simple.  I will reveal it after tonight's meeting.

thanks for the insight!

Permalink Reply by Freedom Seeker on August 10, 2020 at 10:40am
We still get left in the dust on a lot of the decision making.

You have to wonder why a city would eliminate 50+ parking spaces that had access to the beach and playground then screw up traffic by creating more parking spaces in a questionable area.

Willy, did you notice that when you zoom in on Google maps down by the West end on 'street' view, you go from looking at the West End slab as you approach the end of the avenue, to looking at how it used to be a few years back.  Time travel on Google maps: Move ahead one space:

X. Thanks for discovering that. I moved ahead until coming to the end then took pictures of all the angles. Just wanted them for my archives. Then something amazing happened. Google went into an extreme time machine mode and came up with this image. 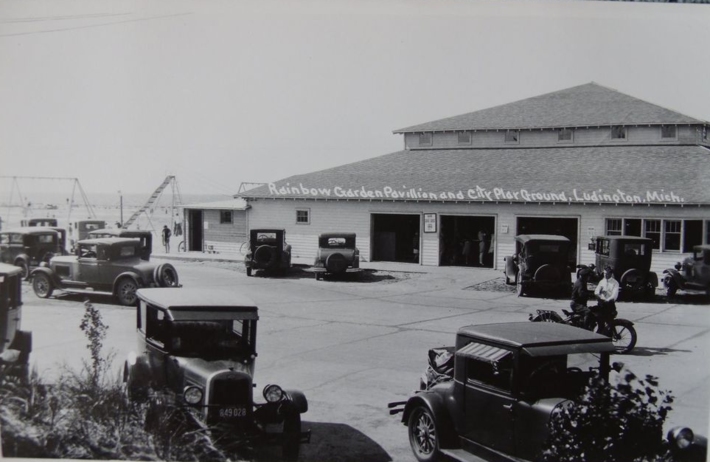