When our Ludington leaders spent $2.4 million to change a furbished downtown street right-of-way with an old restroom building into a refurbished downtown street right-of-way with a new restroom building, they felt obliged to also rename it, changing the James Street Plaza, to the more reputable Legacy Plaza.  If you have went down to visit it since its completion in late 2020, you may have had the feeling that you were being watched even if you were there all alone (which is usually the case for most of the year).

You were not imagining things.  City leaders became extremely protective of this thin piece of real estate, squawking over damages to bollard posts by drivers, damages to the concrete stage by skateboarders who mistook it for the beach's skate plaza, and the inevitable vandalism of the restrooms.  This and more has been discussed at DDA meetings, which led to the purchase of surveillance equipment.  One only needs to look up at the restroom to see that they decided to go big.  On the western side of the restroom building, they have two security cameras on the exterior:

Going around to the north side, you have one more: The east side features another one down at its southern end:

And the south side has another, so all told there are five cameras on the outside of the building: 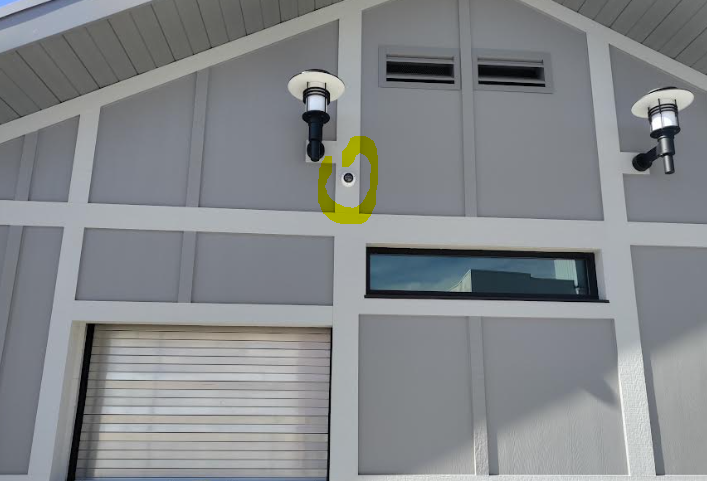 But that wasn't quite enough, they put another one inside the outer door leading to the two gender-based bathrooms.  So if you were to use the Legacy Plaza bathrooms, it is very likely you could get caught on all six cameras if you left the opposite way you came.  The City recently posted some bathroom vandalism happening at their Rotary Park bathrooms (see below) and are planning to protect that investment by installing more security cameras there. 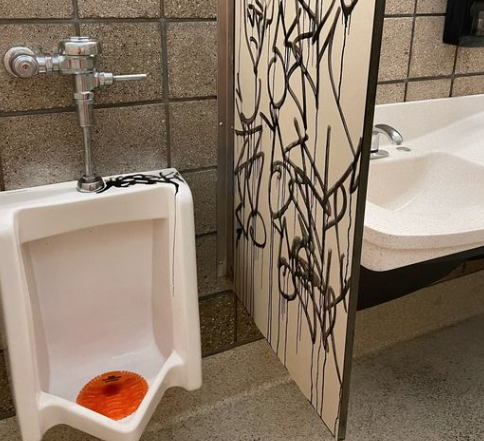 One might think that surveillance systems would have been thought of before these bathrooms were installed as this follows a predictable pattern in Ludington.  It wasn't long after the original James Street bathroom in the last century was installed that they added cameras due to vandals, and the same happened when they put public bathrooms at Waterfront Park a couple of decades ago.

They even went further and hid some cameras inside the bathrooms inside vents and looking beyond the common areas of those bathrooms into the stalls-- because catching someone in the act of plugging up toilets with wads of toilet paper was more important than your personal privacy.  They seem to have stopped that policy after they were caught doing that in both bathrooms of those two restroom facilities and told that it was improper and perverse (improperverse?).

So noting that Legacy Plaza's bathroom building was protected by 6 external security cameras (which is unlikely to actually lead to an arrest and prosecution of anybody who vandalizes the inside of either bathroom), I decided to compare it with the security of our local schools under the premise that :  if City leaders spend so much money to retrofit 6 security cameras onto a bathroom facility with the understanding that they can protect the interior of those bathrooms that contain only bathroom fixtures, then school leaders must have done at least the same for our schools over the last two decades to help protect the lives of hundreds of our most precious commodity: our kids.

Surely school board members are aware that there are multiple school shootings almost every year in which children are killed.  It may not be the same level as graffiti on stall partitions or plugged toilets, but I believe most would say it's more important.  I went around the high school/middle school in Ludington looking for security cameras, such as the one near the main entrance of the high school: 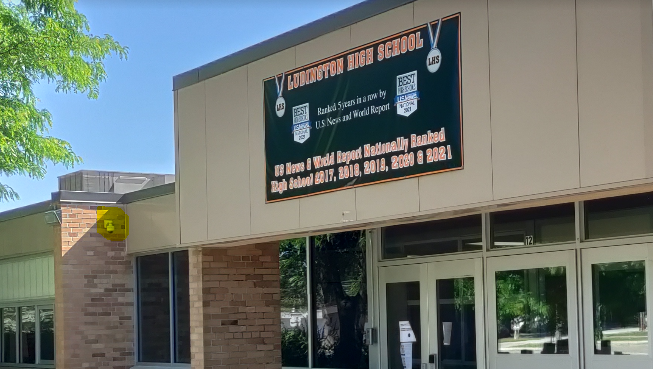 Both buildings had six cameras, usually around the exits/entrances, but dozens of such egresses had nothing.  When this reporter went there yesterday afternoon, two sets of doors without nearby cameras were blocked open on the east side of the high school, probably for cooling effect.  Nearby Franklin School, abandoned late last year when the Ludington Elementary School opened early this year, had four exterior cameras.

The same abandonment happened with Foster School where around 500 Third through Fifth Graders learned their lessons as late as December.  Beside the camera near the front entrance seen above, there are two more cameras (at the southwest and southeast corner of the building) in a building which could easily fit dozens of Legacy Plaza restroom buildings into its footprint, but having half of the external security cameras, and all on one side of the building.

Foster Elementary had more bathroom fixtures in it than the Legacy Plaza facility, and did I fail to mention it had about 500 vulnerable elementary students inside?

That Rotary Park vandalism is either black paint or black majic marker, either way it's disgusting and unbelievable that kids would do that to a new bathroom. But as X said, they have had this pattern of vandals for well over 2-1/2 decades, at all the other existing public bathrooms, and should have had cameras from the start at Lunacy (Legacy) Plaza. Poor planning and rushing to get this Plaza done show in hindsight that their minds aren't focusing on all the pertinent matters as they go about their jobs correctly.

I agree about the cameras especially that schools need more for their security. In my opinion there should also be cameras in every class so that parents can see what is being taught to their children. Parents are kept in the dark and have been excluded from knowing exactly what is going on. Everything from gender dysphoria to the woke culture to leftist ideology and political propaganda is being stuffed into children's heads by lefty activist teachers with the backing of the teachers union and the Democrats. Good teachers must keep quiet or they will be forced out of their jobs. If we don't clean up the schools and  eliminate the Leftist culture that is invading our schools then we will loose these current generations of minds to this insidious propaganda. The Democrats and teachers union are hell bent on brain washing the children.

Sorry about going off the rails on this topic but one thought led to another. The message below was posted on the Democrat Party Facebook page. 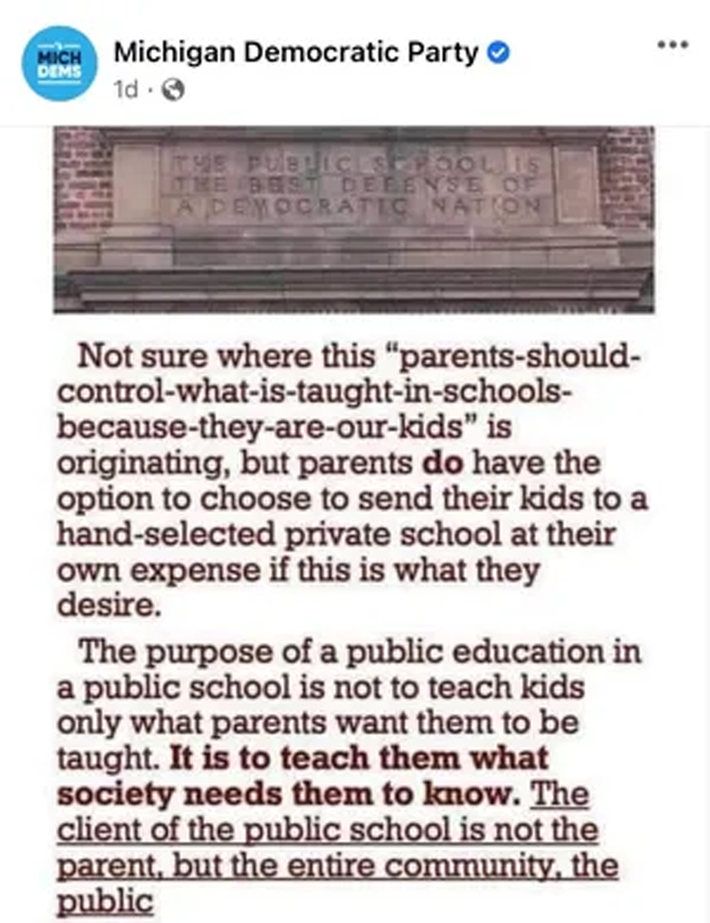 I like transparency a lot more than the next guy, however, having subbed for area teachers for a decade, I initially cringed and objected to the idea of putting cameras in every classroom, being that I've had a couple of awkward experiences over that time.  But then I kind of warmed up to the idea because of the public accountability issues and how cameras have helped make us better understand many police encounters that went bad.

Current federal law would make such records inaccessible to the general public (due to FERPA allowing such footage to be classified as 'student records' and exempt to FOIA), yet it would be nice to have someone outside the school district and law enforcement (a parental advocate, perhaps) designated to review classroom recordings when an incident happens or when improprieties are alleged or suspected.  Real-time access of these recordings to the general public should not happen due to the privacy and security issues involved and the potential of titillating the area's child predators, but parents could rest easier knowing that somebody is looking out for their kids at school.