The Ludington Area School District (LASD) is about to hold its annual "Bike to School" Day, the first time that lower elementary students will be traveling to the newly-opened Ludington Elementary School out on the corner of Jebavy and Bryant Roads.  Students will gather at three spots in Ludington with their bicycles at 7 AM on May 4th, and roll out to their school from those spots at 7:10 AM.

Students going to the middle or high school will be mustering at Oriole Field, and head down wide Tinkham Avenue to their school, a fairly safe route that would have little problems with morning vehicle traffic with a 25 mph limit even if the riders were not fully supported by the local police and other agencies for this day.  The major worry should be with the younger students who must travel on a road without proper bicycling facilities and much faster traffic, who turn into a school totally lacking of bicycle-friendly infrastructure.

Through pictures taken yesterday, here is why the route taken by the younger students is especially dangerous and would be much more unsafe if a student were to actually bicycle to the remote elementary school on any other day than one where the danger can be minimized by taking the precautions reserved solely for this annual event.

To illustrate the unsafe environment, I walked the routes and took pictures of some areas of concern, and will describe the safety issues.  The upper elementary students (3-5 grade) will start at Trinity Church just south of Bryant Road on Monona and head north to the intersection seen below:

We see that Bryant Road heading to the school doesn't really have much space for bicycling at this point.  One might have thought the $101 million bond would have allowed pedestrian or bicycle facilities that would allow non-motorized traffic to travel in safety when they are this close to school, but that's not in the cards.  One may also wonder what the speed limit is here, and one could say it is 55 mph, since the last speed limit sign on Bryant was just east of Washington, had a school zone sign on it (for Ludington Area Catholic School) and was at 35 mph.  Since there was no sign after the school zone ended, one could make a valid case that is a road with an unmarked speed limit. 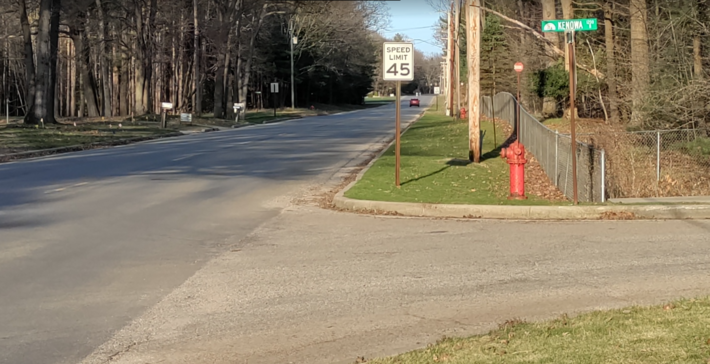 One travels east a big block to Kenowa, the road shoulder is still not there and we see a speed limit sign of 45 mph, either a reduction or increase of speed of 10 mph depending on your interpretation.  If a student rode his bike to school on the first day of school in September and rolled by this at around 7:10 AM, he would be in darkness, on a thin road with no real shoulder, with minimal street lighting and lots of motorists zooming by him on their way to school at 45 mph plus.  It's very dangerous.

Sherman Road is our next intersection passed, we see that the speed limit is still 45 mph, and we finally see something other than a minimal road shoulder, it's still not a lot of space for a young rider.

We then come to United Methodist Church, this is where the lower elementary students (K-2nd) start their bike journey.  Amazingly, the speed limit is still 45 mph and will not change to 25 mph until you get to the Bryant entrance to the school.  In the foreground you can see some potholes in and near the road shoulder, they become more pronounced in this area, adding extra difficulty, especially when lighting conditions are bad.

Here we see where the 25 mph limit kicks in, right where the turn to school property is at.  We also notice that in the turn into the school the shoulder completely disappears and the lane becomes one car width.  That sign on the opposite side, as we will see shortly, is a 45 mph sign for traffic in the other direction.

Now let's start looking in that other direction, for if you ride to school going east, you will need to ride back west.  We start at the intersection of Jebavy and Bryant and notice the dangerous lack of any signs indicating speed limit or that you are entering a school zone.  What this means is that traffic can travel 55 mph at this point, then drive by the length of school property on Bryant at that speed.

Until you get past the entrance where it reduces to 45 mph, as noted before.  Is this the only place in the world where you will see a place where the speed limit reduces after getting past a school zone?  I can think of no other.  Lower elementary student will be crossing the road where traffic is going at 45 mph both ways.  Remember, from this point until you get to Monona, the speed limit on both sides of the road is 45 mph or greater.

But let's now take a look at the entrance to the elementary school they will be entering.  Each of the lanes is wide enough only for one vehicle, fortunately they both go the same way so that the bikes can be passed in the left lane when needed, but ideally the entrance should have had a sidewalk/bike path that would minimize the danger by getting the bicycles and pedestrians, when applicable, a safe route onto campus.  Parents in a rush to drop their kids off, buses not expecting bicycle traffic on the twisting drive, could easily miss seeing a young bike rider. 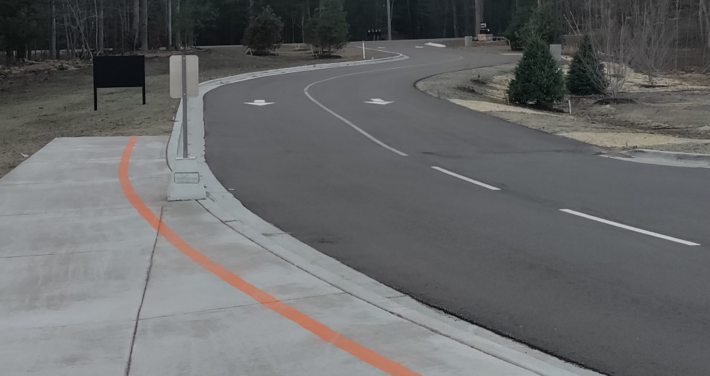 And these bike riders must either keep to the road, dismount and lift their bicycle over the large curb (without any curb cuts anywhere, except one for pedestrians at the entrance to the school), or do the dangerous maneuver of trying to jump the curb.   If they don't ever get on that sidewalk, unsafely remote from the entrance and shielded by high curbs, they have to travel quite a distance on the main ingress road to the place where they are allowed to park on May 4th-- in the bus turnaround at the back of the elementary.

Whoever engineered the school had zero thoughts on providing for students who want to walk or ride to school, not that there will be many, if any, who do.  The school does have one bicycle rack installed on their side entrance, capable of holding about a dozen bikes maximum.  But for this event they are putting cones up behind the school.

When I grew up in Scottville, I would regularly ride my bicycle to school.  My daughters each rode their bikes to Foster School and the middle/high schools in Ludington.  We never had to endure close vehicle traffic traveling higher than 25 mph, and the schools, older and newer, always had places for storing your bikes and easy ways to get to them.  Our streets and schools of the past facilitated students traveling to and from school on bikes.  Why didn't we use some of the $101 million in bond money to make simple changes to facilitate bikes and pedestrians at this new mega-school?

Excellent presentation X. If common sense was the way this new school complex is gauged then I'd have to say that common sense was left at the school's ground breaking ceremony. I believe that this school complex was intentionally designed to promote the transport of students by motor vehicle only. It seems that the intention behind that would be to increase the school bus transportation system cost so that some folks in the closed loop of influential people who are involved with the funding side of things can make some cash under the table. More corruption I do declare!

Another question that should be asked is what parent, in their right mind, would permit their child to ride a bike to this giant lost in the woods school that has risen from depths of a taxpayer's nightmare. As a matter of fact what adult in their right mind would travel these unsafe routes on a bike or on foot? 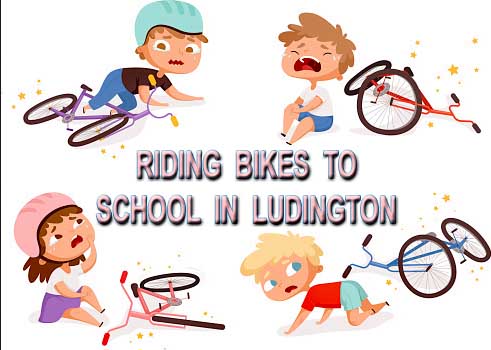 Very well articulated and filmed X, great job. Willy, everything you posted and said about common sense is true as can be, along with the busing situation, time will tell for sure, and probably sooner than later here.

I've learned over the years to be naturally suspicious of government, their motives and goals are often hidden to the common person with only their common sense to guide them.  With information, when officials freely talk about 'Y' and share records dealing with 'Y', but do not publicly talk about 'Z' and are elusive in sharing records about 'Z', then 'Z' is what drives them.

Willy is right, we went from community elementary schools to the megaplex in the middle of nowhere.  They then build it to discourage parents who drop/pick-up their kids from school, without any care for creating a non-motorized route to the school.  This has the result of keeping the parents away from the school environment except for when the school has a meticulously planned event they can control.  Removing the school from the community, then removing the parent from the school; these are negative results from the perspective of parents and kids, but school officials look at it as a great improvement and worth the $40+ million for that part of the bond.

Thus, even if you are not suspicious from dealing with some unscrupulous officials like I have over the last two decades it should be somewhat clear that the goals of the school are to isolate our young kids from their parents and the community without a care with how much it costs.  You need only to look at other school districts who have been caught promoting radical ideas and/or indoctrinating children to fathom what could or will be going on out in the Bufu Egypt province of Ludington.

This isolation of children by age is happening all over the country. School systems are putting all 1st and 2nd grade kids in one building and 3rd to 4th in another building then 5th to 6th grades in another building. I was visiting relatives in a small town near Grand Rapids this weekend and their school system has divided and separated the entire student population. Something fishy is going on with how so many schools are switching to this model of age separation. Children need to learn how to get along with all ages.

The new elementary isn't really all that bad in that respect, as it effectively put all of the elementary kids in grades K-5 under one roof, albeit separated by grade in wings of the building.  When one looks at the playground facilities outside, however, one sees that they seem to be segregated by grade by the use of fences.  It's hard to say whether such stratification is due to a perception of safety or some other nefarious scheme.