A Treasury of Treasurer Conundrums in Ludington

A special meeting at Ludington City Hall of the Ludington City Council will take place at 5 PM on Monday, Sept. 19 to spend a lot of money on legal consultants prospectively hired to instruct the Charter Revision Commission's on legal matters of city charter construction.  The quo warranto action against the City alleging the city council failed in two required duties before the election that created the commission is still being tried, so this hiring may turn out to be a colossal waste of money.  The other issue to be tackled that night is to totally ignore the existing city charter's construction by appointing a treasurer for two years longer than is allowable.

The City of Ludington webpage posted notice of a special meeting to appoint a new city treasurer this last week: 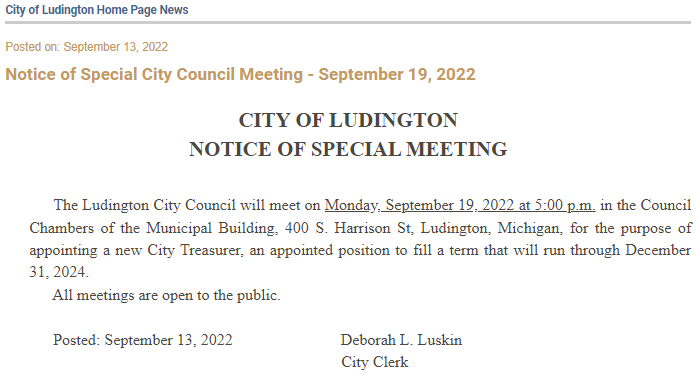 It's unclear why they would hold a special meeting when the regular meeting on the 26th would permit them to appoint a treasurer within the 30 days of vacancy (Aug. 31- Sept. 26 = 27 days) allowed by the charter, as mentioned in the committee notes.  Apparently, they need a new interim treasurer faster than that would allow.

The problem is that they aren't abiding by the charter as regards vacancies in elective offices, which the treasurer is in Ludington.  Here's the charter section that applies:

The council fills an elective office vacancy by appointment within 30 days, but if the office is vacant within 60 days preceding an election (Aug. 31- Nov. 8 = 69 days), presumably for the office of treasurer (which isn't on the Nov. 8 ballot) that vacancy does not need to be filled. However, these appointed officials "shall serve until the next regular election at which time an election shall be held to fill the remaining period of the term of office".

After the treasurer's resignation August 31st, the next regular election is November 8, 2022, not two years later in 2024.  The committee notes are in error, the special meeting notice for 9-19-2022 is in error.  The proper, lawful, and consistent thing to do was to have a special election on Nov. 8, 2022 for any treasurer candidates who would then serve a two-year term.  This is the exact same thing they did when a councilor resigned early in his term back in 2017.

City officials are now conspiring to violate the city charter's clearly written scriptures involving vacancies in office, which pertains equally to all elected officials; this is akin to federal and state officials actively disobeying the constitutions that pertain to them.

The City of Ludington should know better, they have a prestigious Traverse City law firm at their disposal, not to mention the local Carlos Alvarado Law PC and two councilors steeped in law (Jack Bulger and John Terzano).  Why are all these folks willing to break our city's constitution?  Arrogance?  Elitism?

While you're considering this question, consider why they have left off anything about their choice(s) for city treasurer and any sort of qualifications in their agenda packet for the special meeting.  Is this adequate transparency for replacing an elective officer in the City with a "find out after they're chosen" pick?

And while you're mulling over the reasoning you used in responding by a resounding "NO" to that last question, consider what has happened with Ludington's Treasurers over the last four years.  In the summer of 2018, Linda Rogers quietly announced her retirement less than halfway into her term.  Tom Ezdebski took over and never sought reelection in 2020, a pandemic secret that led to a write-in candidate from the courthouse, Mari Jo Lange (later Wittingen), winning the seat.  Mari has now decided to call it quits before her term is half over.   What's going on here?

Permalink Reply by Freedom Seeker on September 18, 2022 at 10:09pm
Sounds like a sneaky addiction ... a habit of deception. Maybe when a Treasurer sees the "real books" they don't want to be involved? Idk ... but trying to keep a Treasurer seems like it's becoming a hard sell in Ludington. What do you think,X, is going on?

When Rogers retired, she had worked long enough with the COL to be guaranteed a nice retirement and planned to move out to Colorado I believe to be close to family.  Red flag at the time was that she quit midterm and left the same time crooked John Shay went to Ottawa County as a deputy county administrator, he now has the top job by the way.

Tom Ezdebski is the ultimate puzzle piece, he gave up a long-time job overlooking hospital finances in Manistee to get his job at city hall and never seemed all that content with what he was doing and I had a hint that it was because of shortcuts being taken at city hall in their finances.

Mari Jo looks too young to retire, and barring her getting a much better job, one wonders why she (or Tom E.) would quit without going full term.  Too much is hidden to be comfortable with what's going on with our local taxes and fees.