At last night's Ludington City Council virtual meeting, the complicity between the local and state government in funneling money into State Senator Curt VanderWall's pockets was on full display and was fully revealed in a comment I had drafted for that meeting and read into the record by the mayor.  When confronted with the irrefutable fact that Senator VanderWall's business was charging the city taxpayers exorbitantly for work that couldn't possibly have been performed to any effect, all city officials remained mute-- despite each of them having a copy of my comments for over six hours. 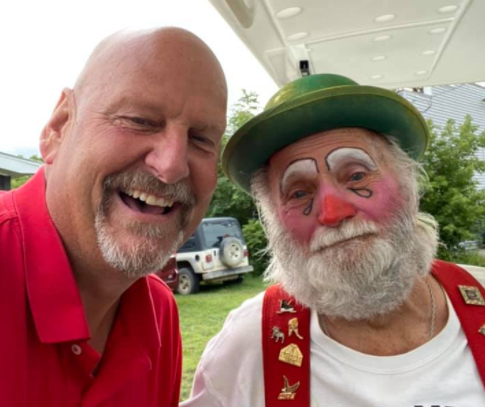 The contract originally made between Senator VanderWall's business and the City of Ludington agreed to in April 2020 had its own issues, in that the city council voted against the qualified low bidder in the competitive bidding process, a violation of city charter explained here:  Ludington's Mole Dilemma.  Though Senator VanderWall swore an oath to support and defend the Michigan Constitution, his company's contract violated that Constitution Article IV, Section 10:  No member of the legislature nor any state officer shall be interested directly or indirectly in any contract with the state or any political subdivision thereof which shall cause a substantial conflict of interest.

I later confronted him about this impropriety on his Facebook page, where he lied outright, saying that his bid was not significantly higher than the other business and "in some cases cheaper".  The records show that the company he owned, Turf Care, was underbid by Tru-Green in every case.  Rather than clarify his comments or attempt to explain his prevarication further, he blocked me from commenting any further, erasing my respectful but probing comments.  Fortunately I saved them. 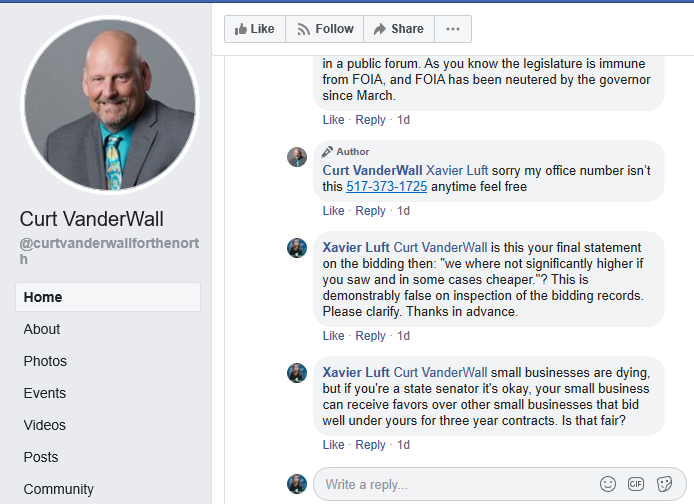 The diabolical agreement between the state senator and the political subdivision he lives in came up for renewal last night, and once again the corruption was running deep according to my research, most of which I include with my comment exploring those depths of misconduct on behalf of local and state government officials.

XLFD (10:00 into video):  "The existing Turf Care contract (found in your packets (p.84)) states in section 6 that their fertilization and grub control work performed would take place from the first Monday in May through the last Friday in October

and in section 13 that monthly invoices would be mailed no later than the 15th of the month after the work was performed.

This would mean that the last invoice received from Turf Care arrived by November 15, 2020.

Multiple reliable sources will tell you that applying grub control treatment should be done no later than May for curative insecticides,

no later than July for preventative insecticides.

That would mean the last monthly invoice from Turf Care to include grub control would have been sent to the City no later than August 15, 2020 if they followed accepted practices.

In your paying of the bills for this March 2021 meeting, you have seven departments paying off 12 invoices with Turf Care for grub control.

These invoices amount to $6650.80.  According to last year's contract, one grub control treatment for all city properties would total $2721.

Are we to presume that Turf Care did 2.5 grub control treatments outdoors at a time when the ground is snow-covered and frozen?  That doesn't apply, since section 18 of the contract says the contract expired in October 2020 subject to a renewal that hasn't happened yet.

So why are we paying $6650 to a company who hasn't performed any work yet this year, that the City has no active agreement or contract with, and who won't have a contract with the City until at least the month of May?  In the contract we had with this company between 2017 and 2019, the total spent each year was under $9000.

In the last ten months, I have added up all of the bills paid to Turf Care and it has amounted to $22,476, nearly three times what they received in 2019 without any reason why.

When this company won the open-ended contract last year, it was not the low bidder in either of the seven categories, one other company underbid them significantly in every category.

This council violated the city charter by ignoring the low bid and employing Senator Curt VanderWall's business, Turf Care, you can see his signature on that contract on p. 88 of your packets. 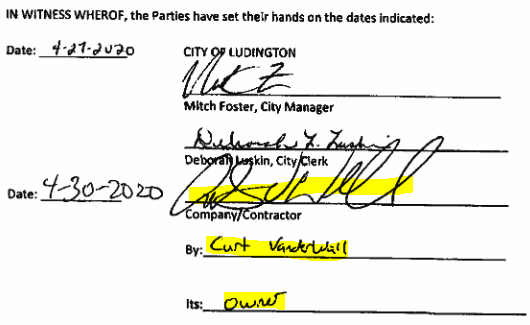 The contract he is violating by apparently sending the city invoices well before he is officially hired and before any work is done, shows that both this city and Senator VanderWall are corrupt-- corrupt enough to funnel money from the struggling citizens of Ludington to the state senator without him earning it as a fertilization and grub control contractor.  State Senator VanderWall's conduct, and your own conduct as councilors, is unacceptable and reeks worse than the strongest fertilizers.  Buy this corrupted senator with your own money, not the taxpayers." 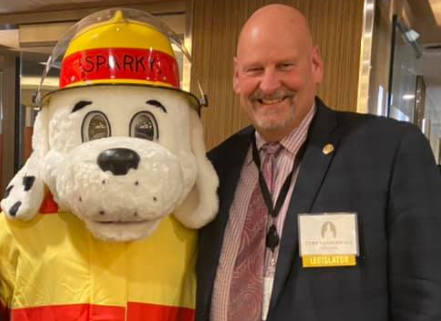 The Ludington City Council listened to these concerns, every single councilor had this comment sent to them over six hours before-- can you guess what they did on the evening of March 8th, 2021?  They renewed the unconstitutional contract unanimously without any sort of comment.  No official questioned the $6650 of charges by State Senator Curt VanderWall's business for grub control or the fact that those charges were made without a contract being in place between the two.

Nobody addressed any of these valid concerns for the rest of this electronic meeting, they valued funding Senator VanderWall's overt graft over being responsible in managing those rising taxes you're paying.

Sound like Curt is ready for a move to Washington DC

“When you see that in order to produce, you need to obtain permission from men who produce nothing - When you see that money is flowing to those who deal, not in goods, but in favors - When you see that men get richer by graft and by pull than by work, and your laws don’t protect you against them, but protect them against you - When you see corruption being rewarded and honesty becoming a self-sacrifice - You may know that your society is doomed.”

Ayn Rand's philosophy and predictions are very cogent in today's world over a half century later.  Let me offer another quote from "Atlas Shrugged" that applies to city hall's refusal to address the 1000 lb. sack of corruption lying in the center of the council chambers:

"To fear to face an issue is to believe that the worst is true."

The worst is true, and these public servant impostors need to confront their illegalities and unethical behavior.

I guess Ludington's new CM has finally and voluntarily lost his political virginity. Excellent work X. This kind of crap is inexcusable and they're doing it in front of everyone while looking down their noses at the citizens who pay the bills. 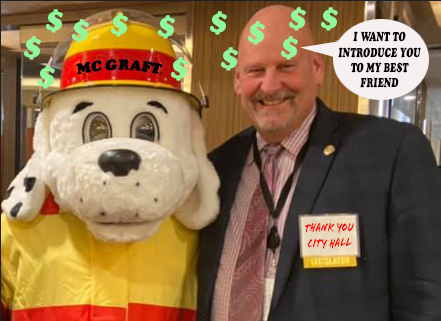 McGraft, Curt's crime dog:  "Take a bite on your dime."

City Manager Foster deserves some blame for several recent mistakes, but this year's city council is totally devoid of anybody with concerns for their constituents and for ethics.  How can a city manager remain untarnished and employed when he is an at-will employee of such a group?

Mr. VANDERWALL has some 'splaining to do. While innocent until proven guilty ... this does not look good for the ethic books, the bookkeeper dealing the money, the city council or or senator. Thanks for poring over the books, X. You can do, with one hand tied behind your back, what seven council members with 14 hands, apparently can't. Let's clean up Ludington favor-for-favor modus operandi.

Thanks for introducing the bookkeeper's contribution to this depravity.  Following Tom Ezdebski's decision not to run for what would have been an almost-certain reelection, Mari Jo Lange became Treasurer as a write-in candidate this fall.  One would expect that both her and Mitch (or possibly Assistant CM Jackie Steckel) approved these multiple invoices of work not done by a contractor that is not employed by the City.

Expect some action on this once I get more information.