Scottville citizens are being robbed in numerous ways by their local city hall, and they deserve better representation than what they are getting.  At the March 1st, 2021 Scottville City Commission (SCC) meeting held virtually, yet not virtuously, I let them know that their sinful behavior was criminal as regards to their treasurer and acting city manager stealing tax money that they weren't entitled to, as recently explained in more detail here.

XLFD:  "Last meeting, I made a comment on several aspects of corrupt behavior by a couple of city officials.  As no official decided to address those serious allegations, I will have to presume that they both acknowledge and accept the systemic graft.

One official did arrogantly proclaim the city treasurer was a full-time position without correction by other officials.  Treasurer Shafer is a part-time official, here's why.

In August 2016 she was chosen with the city manager proclaiming she was hired for part-time work.  Section 6.13 of the city code says the compensation of all officers shall be fixed by the appointing body within the limits of budget appropriations and in accordance with any pay plan adopted by the commission.  The 2016 commission adopted a part-time pay plan for Shafer, they have not adopted any ordinances or resolutions since to change that status (a FOIA response proved that), nor have any simple motions been passed to make the treasurer's job a full-time position (I have checked all meeting minutes since 2016).

Another FOIA response shows that this unlawful transition from part-time to full-time employee costs the taxpayers of Scottville an additional $22,000 per year (editor note:  assuming p.t. work averaging 28 hours per week) over the last two budget years, including about $14,000 per year in benefits she is not entitled to-- just like the acting city manager is not entitled to comp time that he continues claiming and using,

When city managers and treasurers take money out of the public treasury that they are not entitled to, that's called embezzlement by a public officer and that's a felony.  If the city commission does not want to address the crime, they are complicit to a felony.  Thank you."

Despite the acting city manager and city attorney being in attendance (Treasurer Shafer was apparently off inventing new ways to make illicit personal gain for herself) nobody addressed the even-more-serious allegations of high crimes and felonies.  That's expected of guilty parties, they enjoy the right to remain silent even when they are public servants supposedly held to a higher standard.

While these officials take a couple of weeks to mull over a better strategy of dealing with their crimes, let me add another one to the list after building up to it by presenting the commission of the crime over the last few months.  This one involves improper use of the Family Medical Leave Act (FMLA) by the City of Scottville, where it started back in August by a request from City Manager Magaluk to claim FMLA leave in this draft letter, with relevant part shown below:

This was addressed legally by City Attorney Carlos Alvarado in September in a letter to the personnel committee:

The city attorney thus okayed the FMLA leave and 'Magaluk's FMLA rights' to the committee, which led to its acceptance the next month.  The October 19, 2020 minutes of the SCC meeting relate that City Manager Magaluk was taking FMLA leave.  These minutes were approved at the next meeting and haven't been revised since: Later meeting minutes would refer to Magaluk being away on FMLA leave even when they were in the process of cancelling her position due to a flawed investigation saying she was inefficient without proving that point.  Nothing was in the investigation that said any problems were due to taking unwarranted FMLA leave, which she was doing with the full approval of a city commission who unanimously voted for her to take FMLA leave with the city attorney's full blessing.

Alvarado had properly quoted the Scottville Personnel Manual which explains the FMLA simply by reference:

To be in compliance with the FMLA, however, they have to comply with all of that law, which they didn't.  As a public employer, the City of Scottville is covered by FMLA, but they can have no 'eligible employee' for FMLA leave because they have at most 17 employees (if you count city commissioners as employees) as noted in the appropriate code of federal regulations

This is further reinforced in other government FAQ websites clarifying what kind of employees can take FMLA leave: 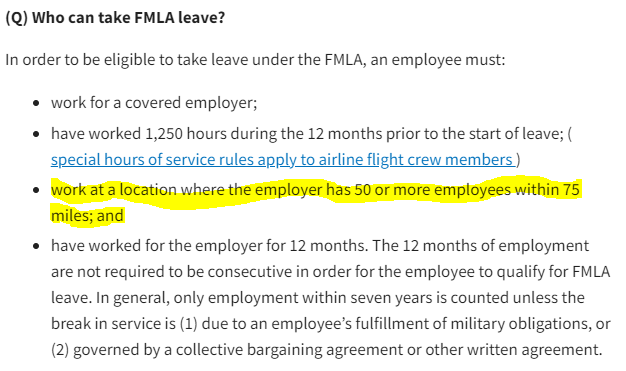 The City of Scottville had no power to give out FMLA leave benefits to any employee, and since they elevated the acting city manager's pay substantially while he stood in for Ms. Magaluk, they invoked additional costs by granting this illegal FMLA leave, all borne on the backs of the beleaguered Scottville citizens already having their taxes taken fraudulently by a city treasurer claiming benefits she cannot qualify for and by an acting city manager getting pay raises assigned to him at 'supposedly advisory only' subcommittee meetings.

The corruption in Scottville is deep and only getting deeper by their inability to follow the law and their silence when confronted with their wrongdoing.

Maybe you should offer your legal research skills to Mr. Alvarado.  It appears he could use a good assistant.  Wow.  I'm not sure it's corruption as much as ineptness in legal advice.  I hope the City of Scottville will consider your time and comments.

X, didn't a similar thing happening Ludington also?  A couple of employees snuck through the cracks without the position being approved by the LCC?  How did that come out?

A deputy treasurer materialized during 'Lying' Steve Brock's interim city manager era in 2018.  Ludington's city charter prohibits the City to create an office without council approval, that office had been eliminated for several years.  I mentioned it at a couple of meetings, talked to Mitch about it as he came into power; he acknowledged it was done improperly but that the treasurer did need help with his workload, and I let it go as one of Steve Brock's errors.

At the last council meeting, I inquired into a new position or two in the assessing/building/rental inspector departments, as reflected by changes in the budget.  I will know more about this when I get a FOIA request back which is due on Monday.  This will likely be a larger infraction than Scottville's, but I doubt the COLDNews will recognize it as such.  Mitch knows better now that he's entering his third year, so he won't get a freebie here.

Thanks X for the summary and follow up.  Regarding any "new" employee position, who wouldn't say they need help, especially with "an endless supply of taxpayer funds and frequent increases to blow."  What about the CDD "communications and marketing" position which started out a few years back.  Did that have approval?  Seems it was on a part-time basis and now seems to be quoted a lot on the radio?  I'm glad you are holding the COL accountable.

I think FS may be right about the law being misinterpreted. I find some of the legalize to be somewhat confusing. The main clog in the legal drain is the portion of the FMLA regarding what public employee qualifies for benefits.

The first half of the paragraph explains that all public agencies are covered by the FMLA no matter how many employees they have. The second half of the paragraph says public employees are not covered if a public agency does not have 50 employees. This part of the law seems to be in conflict with itself. If the second half is correct then there are many cities, towns and villages that  have employees who do not qualify for FMLA.

Is it possible that changes have been made to the law cancelling the 50 employee requirement but have not been updated yet? I can see where a confusing interpretation can be made when reading this document.

As time goes on, each and every law gets more complex, self-contradictory and confusing as new legislatures create laws without a lot of regard for the existing laws.  That being said, I admit being confused with the FMLA regulations, so I researched it more thoroughly than the two links I provide here; I even spoke with a person with decades of experience in the field of managing a small city, who told me that my interpretation was correct and that they had heard directly from a federal source that their employees were not eligible for FMLA leave by right.

To justify the apparent contradiction, note that an employer can be covered by the rules in FMLA, yet have no employees eligible for taking FMLA leave, and thus it becomes mostly meaningless unless and until they have eligible employees which would require them to grow to at least to 50 employees in that 75 mile radius.  It's kind of like social security-- you begin paying into it as a young person, but cannot take advantage of it until you grow 40-50 years.

Exactly  Covered and Eligible are the 2 words..   A Government Employer with 20 employees is covered by the MFLA but not Eligible for Employees to take advantage of MFLE because of not meeting all the Eligibility requirements.. 50 employees is the one COS is missing...   So Magaluk is given MFLA approved by council she is going to be off work for 12 weeks not receiving any pay and according to the MFLA her job is protected until her return. SO while she is off on MFLA leave her job held for her return and during her leave the in house investigation takes off and she is basically fired while on the leave...  Am i missing something here...

Thanks, Willy. Your comment is exactly what I was thinking but I didnt take the time to explain it as well. Thanks for clarifying. I see the discrepancy or poorly-written FMLA law contradicting itself. It is confusing.

My pleasure FS. The 50 employee limit was included to protect small businesses. It keeps government intrusion from bankrupting businesses that operate with a minimum work force by letting them opt out, since having another government program could be a major burden to them. Small government entities are allowed to participate in FMLA regardless of the number of employees but this is just a smoke screen.
The FMLA must have been a hot issue for many small towns. So the FMLA gave them an out. By including
small towns with less than 50 employees to be exempt, and adding a confusing paragraph. The lawmakers then put the burden on the employees. They said "sure your town is covered no matter how many employees they have, but you employees cannot get benefits if you don't have at least 50 co-workers". This is just another way to make lawmakers and small city officials look good. They give a benefit to the towns so the towns can say, we want to help but the lawmakers say we can't unless we increase our employee numbers. This is a snake eating itself and has apparently fooled enough people to think they will receive a benefit they can not possibly qualify for. Permalink Reply by Freedom Seeker on March 3, 2021 at 10:53pm
Excellent graphic Willy! Thanks for even more clarification, and to X and Woodsman.