Local Parity and Disparity in the American Redistribution Plan

The $1.9 Trillion American Rescue Plan (ARP) recently passed has its own share of parity in distribution to individuals and local governments in our area, but it has a noticeable degree of disparity between cities once you look beyond our area. If 140 million people in the USA qualify (less amounts have qualified for prior stimulus checks in 2020), less than $200 billion will go to individuals, or about 10% of the ARP's payouts.  A more significant amount will go to state governments and a comparable amount will go to local governments:  counties, cities, townships.

The ARP money distributed to local county governments, Mason County and the three counties surrounding, it are as follows:

If county distributions are based mostly on the county's population, one can infer that local counties get roughly $200 per resident.  This seems to be a fair distribution.  When one looks at city and township governments, a similar parity seems to arise based on their populations when one adds the total allotments for each local government:

Interestingly, those totals are roughly equal to $100 per person when one considers the total population of each county.  Thus, the local component in these four counties is fairly consistent, roughly $300 per person:  $200 to the county government, $100 to the township/city one resides.  Where is the disparity this humble author originally claimed.

A Tale of Twin Cities 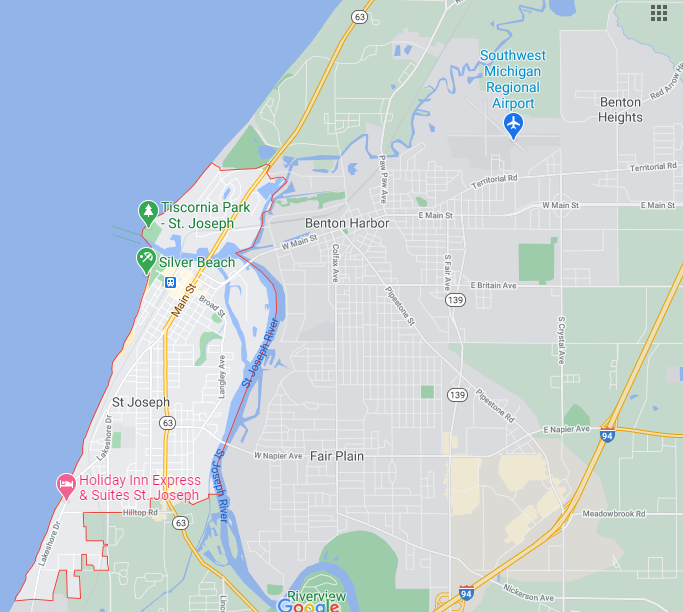 St. Joseph and Benton Harbor are two communities that are adjacent, yet far apart.  St. Joe has the advantage of abutting the Lake Michigan coast, having been founded a couple decades before Benton Harbor, with the St. Joseph River serving as boundary.

St. Joseph is comparable to Ludington in size at 8365 people, and their city government will get roughly $100 per person from the ARP ($820,000) just like Ludington and Scottville.  Benton Harbor is just a little bigger at 9843 people, and what will they receive? 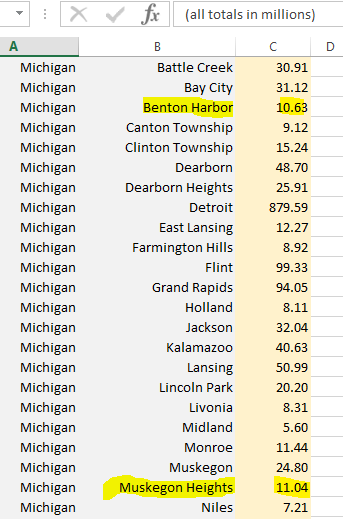 Perhaps the city went past a population threshold that allows much greater rewards?  No, consider Big Rapids; their population is 10,355, bigger than BH, but they will receive only $1,020,000, less than ten percent of what Benton Harbor will get.  Big Rapids is approximately the same size as Muskegon Heights, another city that will get megafunded at $11,040,000, or almost 11 times the amount of Big Rapids.  Rather than the city rate being at about $100 per person, the rate for the Heights and Harbor is over $1000 per person.

Why is there this disparity?

Could it be based on average incomes, where poorer cities/townships get a multiplier?  Nope, consider that Lake County is the poorest county in Michigan, with Yates and Webber Townships (along with BH) being in the top four poorest communities in the state.  Webber Twp gets $93 per resident from ARP, Yates Twp gets a $102 rate.  Benton Harbor gets $1080 per resident.

Could it be based on Benton Harbor being considered a 'metropolitan city'?  Benton Harbor and several other Michigan cities are listed in the special 'Metropolitan City' section as far as disbursements but the ARP clarifies that the definition of metropolitan cities includes all cities over 50,000 inhabitants.  Among those, Livonia, a city of 93,655 people who will get $8,310,000, or $89 per resident.

It seems patently unfair that cities like Benton Harbor and Muskegon Heights are getting paid 10 to 11 times the amount per capita than cities like Ludington, Big Rapids, Highland Park, and Livonia in a somewhat arbitrary part of an otherwise mostly-fair redistribution plan.  Why build such injustice into a government handout supposedly aimed to rescue those in direst need, and missing that target?

The data used in this article is from this Excel spreadsheet issued by the Senate Democrats.

Permalink Reply by Freedom Seeker on March 14, 2021 at 2:00pm
Very interesting study, X. As far as any intelligent response, I ain't got one, and the whole ARP is about as sensible as this disparity you show. The only thing I can feel about the whole democratic plan is that it will have an outcome similar to the high rise residential units in Chicago's south east side during the Roosevelt era, getting people used to government handouts and not really pulling them up by their sense of human pride and confidence in self-achievement. Meanwhile cities feel a drunken payout that will, imo, increase bloat and waste, while America spirals down the tubes of debt.

Wow! That's a boat load of information X. I could never have read all of the information and put together such a well done article. Again, the Government has made a complicated mess out of this situation. A situation they caused, not the virus.

I think they created a smoke screen like magicians often do. While we are all concerned about which state, city or citizen gets what they are sneaking out the back door with most of the loot. It's not who get's what, it's who pay's what. This isn't manna from heaven. The bill for this will come due soon enough and may be the wave over the bow that sinks us. I'm afraid we have had our clothes stolen while we worried about the color of our socks. 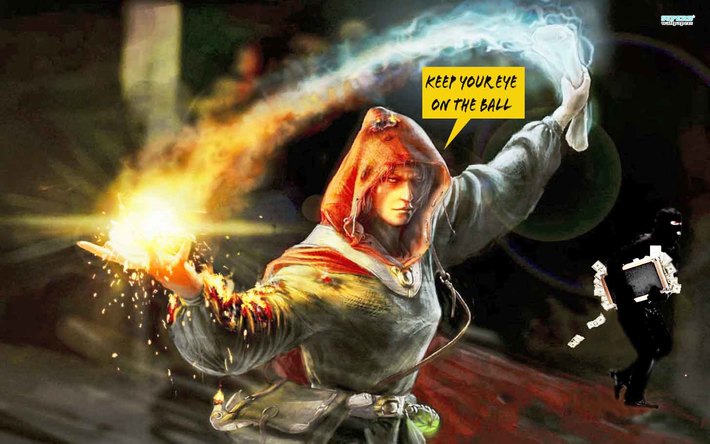 I was originally just interested in the local allocations in the Excel spreadsheet, but my natural curiosity got the best of me and I explored further finding some communities that really hit paydirt, finding other needful communities that missed out.

Allocating $350,000,000,000 to state and local government appears to me as an admission that the federals are taking and making much more money than they should be, then inefficiently handing it back to the other governments, wiping away billions of dollars in the process' bureaucracy-- same as they do in the grant process.

Muskegon Heights has average revenues (and expenditures) that are more than Ludington's, but unlike Ludington, they will receive a stimulus amounting to 1.5 times of their normal annual budget rather than 1/8th of it.  Meanwhile, qualifying MH citizens will get the equivalent of less than one month's work at minimum wage.

Both the City of Muskegon (https://www.hud.gov/states/michigan/community/partnerwebsites) and the City of Benton Harbor (https://bhcity.us/community-economic-development/) are "Entitlement Communities" as defined by the Department of Housing and Urban Development meaning that they receive direct allocations from HUD each year. In this stimulus package, it seems as though they are utilizing a per capita amount plus additional allocations for those folks who already have direct funding from the Federal Government.

Thanks for trying to explain the disparity, but the entitlement community label falls far short.  First off, the City of Muskegon (at $659 per capita) is distinct from the City of Muskegon Heights, one of the communities that got the mega boost and is not an EC.  Second, Livonia is on the EC list, yet only gets $89 a person.  Back in 2010, the ACS reported an average household income in Livonia over twice the average household income in Ludington, but Livonia is the entitlement community...

Apologies. Muskegon Heights is an Entitlement Community as well.

I would agree that at first review in this "stimulus" it seems as though the allocations for the City/State payments are swerved in certain directions versus being a more equal distribution. It is unfortunate that there was so much pork or silly spending that went into a bill that should've focused on the needs of people dealing with the affects of so many negative affects of COVID (forced shutdowns, lost wages/employment, reduced revenues).

Amen.  It's too bad the few rational people left in government and mainstream media cannot point out that those $1400 checks people clamor for come at a much more expensive cost to them and their posterity over time.  Instead you only hear from those officials and 'journalists' that would have you max out your credit cards and ignore your monthly statements until the repo man eventually comes.

"A democracy cannot exist as a permanent form of government. It can only exist until the voters discover that they can vote themselves largesse from the public treasury. From that moment on, the majority always votes for the candidates promising the most benefits from the public treasury with the result that a democracy always collapses over loose fiscal policy, always followed by a dictatorship."  -- Alexander Fraser Tytler

Permalink Reply by Freedom Seeker on March 15, 2021 at 5:31pm
Speaking about the measure of freedom enjoyed by the people in a republic or democracy, Tytler wrote, "The people flatter themselves that they have the sovereign power. These are, in fact, words without meaning. It is true they elected governors; but how are these elections brought about? In every instance of election by the mass of a people—through the influence of those governors themselves, and by means the most opposite to a free and disinterested choice, by the basest corruption and bribery. But those governors once selected, where is the boasted freedom of the people? They must submit to their rule and control, with the same abandonment of their natural liberty, the freedom of their will, and the command of their actions, as if they were under the rule of a monarch".[15]

Thanks for that additional context, I wholeheartedly agree.  It is the rare exception when an official defies becoming an automatic aristocrat when they get elected to an office; naturally, their appointees and staff will also follow that trend leading to a growing gulf between the government and their constituents.

Treasure the few Rand and Ron Pauls, the Ronald Reagans, and even the Donald Trumps in this world who accept the premise that they are public servants, not that the public are their servants.  The doddering fool in the White House now told a union worker in this very state less than a year ago:  "I’m not working for you.  Give me a break, man. Don’t be such a horse’s ass."  These types will act like monarchs, but they are just aged caterpillars.