Not a lot was scheduled to do at the Monday, January 11th, 2021 Ludington City Council meeting.  The first meeting of the year generally has organizational procedures being done, most of this was done in December with committee appointments, but on this night they would choose Les Johnson as Mayor pro tem, the councilor who would fill in for the mayor shall he be absent for any reason.

Other than that, the agenda shows they would rehire their lowest-bid cleaning service, approve the financial institutions to store their money at, and renew an agreement between the Harbor View Marina they manage and Harbor Front Condominiums to share use of the clubhouse and swimming pool for a fee. 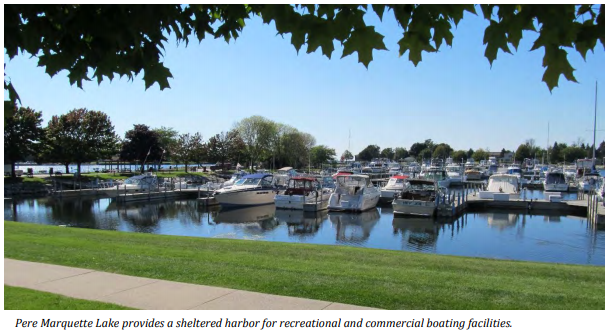 The rather bland midwinter docket needed a little spicing up, which I incorporated into my first comment which keyed in on the Harbor View contract being discussed and their actual 'first meeting of the year':

XLFD (3:00 in):  "Allow me to welcome all the new councilors, the new committee members, and the new fire chief, who have all answered the call of public service in accepting your new roles.  May you measure your efficiency in providing basic services by the extent you transparently preserve the rights and wealth of those you serve.

Last week, the City properly noticed that a quorum of city councilors may meet at several City facilities on January 7th.  One of these facilities was the Harbor Front Marina clubhouse, which is a facility owned by the State and ran by the City but it is also ran as if it is a private facility.  I was sitting quietly at the clubhouse this last summer, when two marina managers said I had to leave.  I called the police and it was established (without written proof) that only registered and paid boat slip guests were allowed at the clubhouse.  Anybody who did not fit that description could be arrested for trespassing.

Thursday afternoon, I went to Harbor View Marina and saw five people enter the clubhouse, the site of the public meeting.  The city manager's notes infer that four of those were city councilors, I will not ask those councilors whether they are paid boat slip holders, I do know that the marina was empty of boats as it typically is in January.  I also knew that I wanted to attend that meeting, and I  knew that I was afraid of being arrested for trespassing, just like I was ten years ago when the City speciously banned me from city hall and the police station and I was both disenfranchised from voting and attending public meetings for fourteen months.

The Open Meetings Act in section 3(1): states unambiguously that meetings "must be held in a place available to the general public".  The City police sergeant, marina manager, and city manager made it very clear that the general public is not allowed in the clubhouse at Harbor View-- and yet they all openly allowed city councilors who do not qualify under the set rules into the building to hold a "public" meeting where the public would be threatened with a misdemeanor just for attending.  This is less a violation of the Open Meetings Act, and more of a violation of the civil liberties of all Ludington citizens who are forced to support this ostensibly-public facility with their local and state taxes and are openly discriminated against for using them.

The City may perpetuate this civil right infraction tonight by continuing to allow the Harbor Front Condo Association special access to Harbor View Marina facilities, thereby reestablishing a third class of individuals, all being treated differently at a public facility.  If you cannot see that as wrong, you may be in the wrong job. [END comment]"

You may notice that City Manager Foster left off the word "job" which altered the meaning of my statement. Nine months ago when I alerted the city manager that I would not participate via Zoom at city council meetings since I believed (and still do) that such meetings disenfranchise about a third of the population that do not have internet access, we agreed that I could send in my comments to be read and entered into the record at these faux public meetings.  If Mr. Foster fails to read my comments properly, or fails to read my comments as he did for a recent public hearing, I may have to reassess my posture.

The public hearing to be held this evening was for the five-year recreation plan for the City of Ludington.  Never had I made a comment that effectuated so much instant change as this one did.  Part of this was because the drafted Recreation Plan had a host of problems that should have been obvious if anybody at city hall took a few minutes to proofread the document drafted by Community Development Director Heather Tykoski and compared it with what the state requires of recreation plans.

This led to the city council passing a plan before them with 16 flaws (making you wonder if any of them critically looked through it), but to his credit, the city manager had Tykoski correct several of the flaws that afternoon which led to the since-amended recreation plan.  Here are my comments with brief notes as to their correction in the amended plan (the last ten were entered into the record without being read at the meeting).

XLFD:  (9:00 in) "A cursory review of the Recreation Plan found the following issues, please have the community development director correct them:

p. 1 Harbor View Marina is left off of being under direction of the city manager and council [unchanged]

p. 4-6 City Marina and Harbor View are wrongly labeled as public park and special use park types, they should be accurately represented as recreational boating facilities [unchanged]

p. 6 Text infers that Harbor View is still being privately leased but managed by the City [unchanged]

p. 7 The three lifeguard stations at Stearns have been removed and burned [unchanged]

p. 8 the 1996 handicap accessible pier at Copeyon Park has not been there for many years [unchanged]

p. 45 Organizational Chart is cut off on the right, shows City manager as superior to standing committees, which he isn't [more of the chart is now missing, CM still superior to committee] 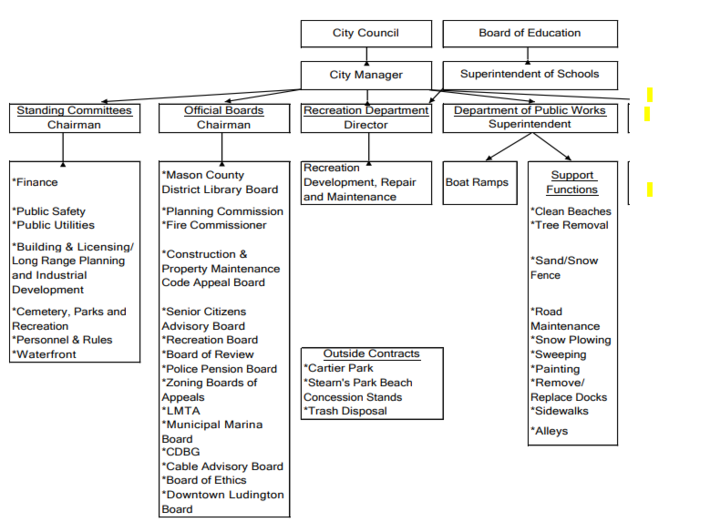 p. 58-9 Transmittal letter to county/state officials dated 1-11-2021 soliciting comments for the plan the day it's considered and likely passed by city council [unchanged] 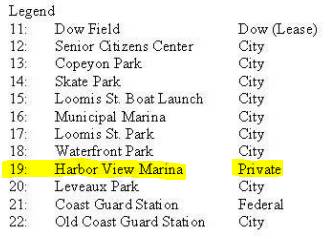 If you were keeping score, they corrected a transposition, added one portion for private marinas and removed a portion with a spelling error therein.  The city manager and the city council ultimately accepted a plan that still had a lot of issues that makes the City of Ludington administration look like a bunch of rubes, allow me to illustrate further with a couple of snapshots, the first of the late-added private marina paragraph:

CDD Tykoski starts off capitalizing the 'p' in private as if it's a military rank, misspells "Thompson's", "Pier Pointe", misidentifies "Ray's Auto-Marine" as Karboski (misspelling Mr. Karboske's name in the process), leaves out "lake" in "PM Lake Lodge" and finally uses the word "verity" rather than use "variety" once again.  Seven mistakes in one paragraph could be expected of somebody in elementary school, but should it be expected from somebody who has over a dozen years in grant writing?

She then sends this letter to the county administrator where she adds a dozen extra 'spaces' for some unknown reason: 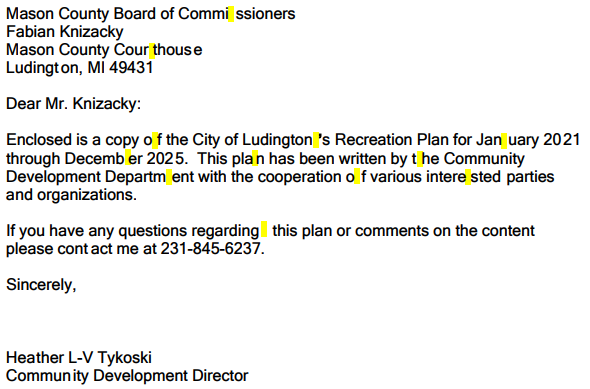 The plethora of mistakes throughout the recreation plan shows a high degree of laziness and/or incompetence in the current community development director.  The capacity of the city council and the city manager to forgive and unanimously pass on these mistakes without correcting them shows a higher degree of laziness and/or incompetence at their jobs.  Their inability to figure out why holding a public meeting at a facility that is not accessible to the general public only further reinforces that impression.

Perhaps they have figured out that they can be lazy and/or appear incompetent when they don't have to answer directly to the public as they siphon out even more taxes from them.