Not So Fast, Scottville Commission

The crooked officials running the City of Scottville did an amazing thing at last night's virtual city commission meeting that was far from virtuous.  On their agenda, under new business, they had an item listed as "speed limit revision on Main Street".  When they got to that item, they had a brief discussion led by the Acting City Manager (and Police Chief) Matt Murphy on how he felt that having the speed limit moved down to 25 mph on Main Street between Fifth Street on the south to Johnson Road on the north would be a good thing.

No traffic studies were offered, no advance notice to the public was given for what 'revision' was scheduled to take place, and thus the public was not allowed to know or speak out on the topic before Murphy expressed his feelings to the commission.  Other commissioners expressed their own impressions that it sounded like an improvement, and the commission passed it unanimously, the main issue appeared to be whether they had any '25 mph' signs in stock to replace the '30 mph' signs already in place along the route.

And just like that, going through Scottville from the north or the south just got slower-- the DDA must be salivating at all of that slow traffic going through their downtown.  Except, that the speed limit is already 25 mph in the downtown, so this move doesn't even improve their lot, just those few businesses outside the dedicated downtown.  This change will not help the struggling businesses on Main Street.

Before we answer that question let's look at two things, to do so we will have to travel back in time to 2015.  The City of Scottville was looking at changing the speed limit around the curves on First Street as it runs west out of town, the Ludington Torch tracked that issue especially the side issue that came up looking at the speed limits on South Main Street.  The Michigan State Police did a traffic study looking at 85 percentile speeds of First and South Main, their map looked like this: 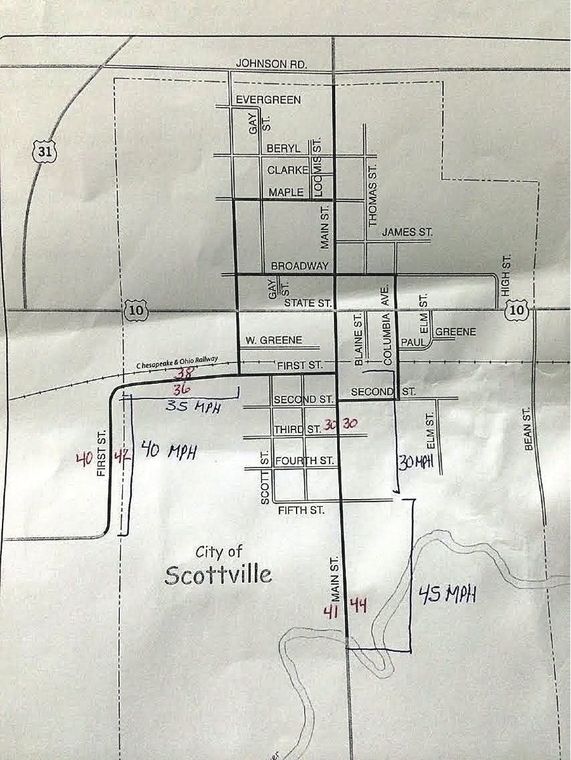 They found that 85 out of 100 cars travelled at least 14 mph over the posted speed limit going up the river hill on south Main, but that they slowed down to the posted speed limit of 30 once they crested that hill, the same speed as those that were beginning the ascent down.  Federal and state studies have consistently shown that the drivers most likely to get into accidents in traffic are those traveling significantly below (10 mph or more) the average speed.  The vast majority of drivers will not go faster than what they feel is comfortable and safe regardless of the speed limit.

The commission at that time ignored changing the South Main speed limit, even the ones up and down the hill that were way off from the 85 percentile rate.  On November 2nd, 2015 the commission passed an ordinance changing the rates on First Street, two months after it was introduced to the public and the commission.  This speed limit was added to the city code along with other ones, including North Main Street, which was set at 30 mph by ordinance twenty years ago: 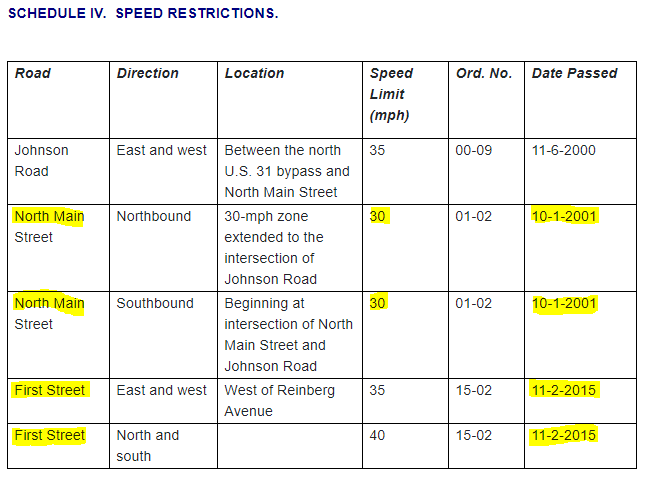 So here's what you have: an acting city manager with less than three months experience comes before the city commission in a Zoom meeting, where five out of seven commissioners have less than 2.5 years of experience at their job, then explains to them that he thinks the speed limit is too high when a recent traffic study shows the 30 mph speed limit is perfect, and then they vote by a simple motion to change the speed limits for Main Street, much of which has already been established through ordinance in the past.

They can't do that.  It's against the law, a 2001 ordinance that has yet to be repealed, regardless of their actions last night.  The ordinance process was followed to make the current speed limits on the streets of Scottville (other than State Street which is controlled by the MDOT), which would need to be repealed at the least.  Speed limits in Michigan cannot be modified without first conducting a speed study and adopting the results rounded to the nearest 5 mph (see MCL 257.627, esp. section 13).

The only existing speed study confirms that 30 mph is the right speed on South Main, if one was ever done for North Main, one can only imagine that it would be as high, 35 mph could be a very real possibility.  There is no indication that there has been a speed study establishing the 85 percentile rate for either direction, so to answer our earlier question of why would a police chief acting as a city manager want to bypass the ordinance process and speed studies in order to enact a speed limit that 85% of people will naturally be driving at least 5 mph over?  Can you say "revenue generation"? 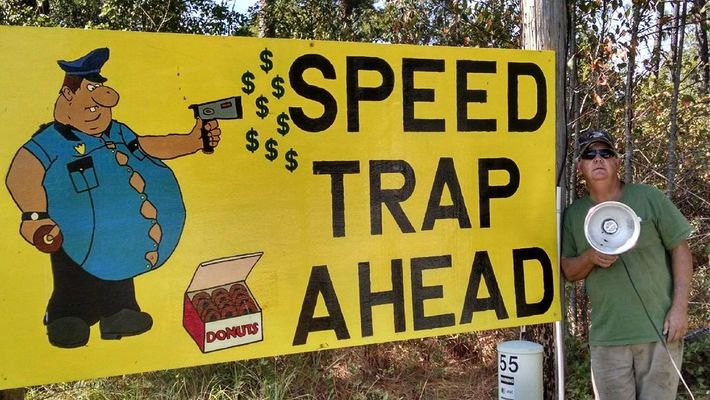 The Scottville City Commission did almost everything right in 2015, just like they almost did everything wrong yesterday night.  They had a neutral agency (the MSP) conduct a speed study.  They alerted the public to the findings and went through the ordinance process, which, in Scottville, involves an introduction at one meeting, and a passage of the ordinance no earlier than one month after the meeting at which it is introduced.  The 2015 study itself was initiated by a Scottville citizen who thought speeds on First Street were inappropriate.

The only thing wrong they did in 2015 was not adjust the speed limit up at where it was advisable up and down the Scottville river hill.  The only thing right they did in the process in 2021 was to not have their inappropriate speed modification finalized at the committee level, where the general public of Scottville has not been invited for nearly a year.

The commission made it known last night that they will set a new rate of pay for the police chief/acting city manager at the committee level-- so that the people of Scottville are not able to see how much of their money they are giving away to the guy who hasn't been following any laws since he started acting.  Why are the folks of Scottville allowing their representatives to get away with all of this crap?

Pretty, little, quiet town, Scottville. Don't know too much about long-past politics and refrain from commenting on the recent City manager dismissal until reading the "investigation" report, but it seems to me there was an ill-fit in the job and Magaluk made out pretty well in the mutual separation. Maybe she wanted out anyway. Lots of small town politics and inflexible people dealing with new ideas, maybe.

It's real hard to raise a young family and run a city effectively, even though there are many new legislative "right" for new parents, it may still piss others off that an official is gone so long on their job. It seems as simple as not doing a task here or was there not a "Duties" list passed on to the replacement? Still it doesn't look good for the COP to be aiming for her job or calling her out on a "possible" miss.

Meanwhile, the City of Scottville should remake itself somehow, and get off the apron strings of Ludington, lower water costs to residents, lower taxes and get businesses filling up their downtown. It seems Scottville is oppressed by the high water rates buying water from Ludington. Maybe they should find their own water source, and sell water back to Ludington in cases of emergency.

X, you should apply for the job!

If I applied, I could always point to my last twelve years of being a special advisor to the last two Ludington city managers.  The City of Scottville is also very needful of having some journalistic balance to offset Commissioner Alway's propaganda monopoly.

Well I predict if the COP/Manager is not reined in the SPD will be larger than the MCSD.....

Kudos to whoever persuaded ACM/Chief Matt Murphy and the Scottville City Commission to do it right this time: