In the article Sedition in Scottville we looked at some of the timesheet irregularities of the City of Scottville, particularly those of two officials:  Treasurer Kathy Shafer and Acting City Manager (and police chief) Matt Murphy.  In the investigation report which was released to the media after the city commission took action to accept the resignation of City Manager Courtney Magaluk, it appeared to many that Magaluk may have been treated unfairly by an investigatory committee that found her 'inefficient' and suggested discipline was needed.

In her defense of the incident (almost missing a filing deadline for state revenue sharing documents) which led to the formation of an ad hoc committee, Magaluk claimed that the documents needed to be filed would have taken her a 'matter of hours' and would not have cost the City any overtime because of her salaried position.  That isn't unreasonable to believe, she had done that the prior year and the paperwork was mostly a matter of entering figures that were at her disposal.

In that pay period, Murphy would claim 20 hours of comp time that he wasn't allowed to receive, Shafer would claim 25 hours of overtime which she worked without notifying or getting approval to do so by Magaluk, who was city manager at the point she did her overtime work.  The Scottville investigative committee looks rather foolish claiming that Magaluk is inefficient when she could have and would have finished the report in less than one-tenth of the time of the two at a cost of nearly a thousand dollars less to the taxpayers of Scottville.

The true inefficiency is the escalation of costs by over 40% in the annual Scottville general fund budget at a time when their citizens and businesses can ill afford it.  The itemization of those increases is currently being investigated through the FOIA process, but the Ludington Torch has received confirmation that the 'city treasurer' position in Scottville has never formally been converted from a part-time position to a full-time position.

The transition between a part-time treasurer working 24 hours a week without benefits to a full-time treasurer working 40 hours (or more) comes at a major cost to a municipality even if there is no pay raise for each hour worked.  The added hours and benefits nearly triple the amount of money paid out.  Let's not forget, before Shafer was hired in 2016, then-City Manager Amy Williams did the treasurer job along with her own.  This is not a job that requires a full-time position.

In all the five timesheets for two week pay periods the Ludington Torch has reviewed, Shafer has worked 80 hours with several instances of overtime where it was not warranted or authorized.  The city commission has never declared her as a full-time worker, but she appears to be getting all of the hours and benefits one would get, while allowing the acting city manager to get and expend comp time on a regular basis. 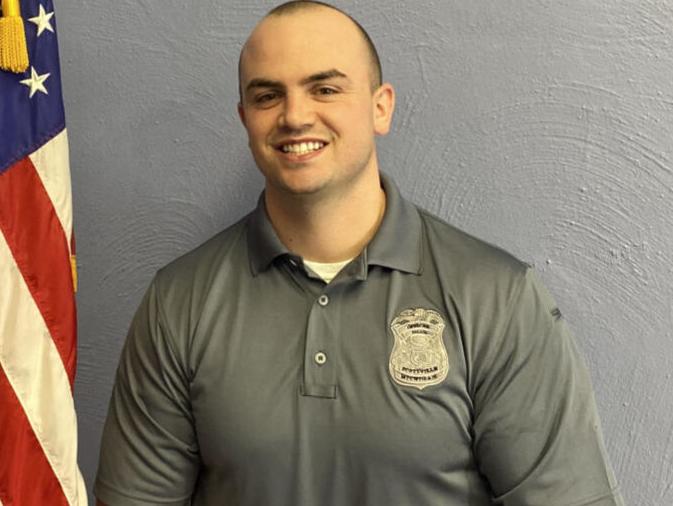 Back in June 2019, the city commission created a school resource officer (SRO) position and were poised to have a dedicated SPD officer in the schools later that year.  That position never materialized until early December 2020, coincidentally shortly after Magaluk went on a maternity leave that she would never come back out of, replaced by the police chief.  This hiring was announced publicly December 6th, local media noted that Steve Case (pictured above) was attending police academy out at WSCC.  This academy attendance is reflected on his payroll the next month:

The City paid him a lot of money to be trained those two weeks, his paycheck was the second highest on payroll, falling only behind his chief, who was also doing double duty as city manager: 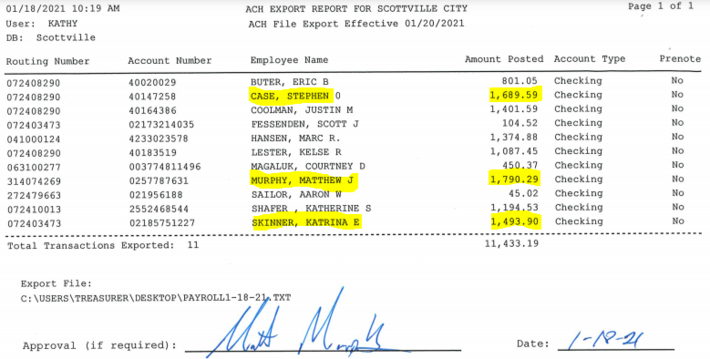 His paycheck was $200 greater than the other SPD officer, Katrina Skinner, an experienced officer who already has her MCOLES certifications and who worked six hours of overtime during that pay period. This wasn't a fluke, the previous two weeks had the veteran Skinner working her job in overtime and the new SRO-in-training doing who-knows-what for 80 hours during the time when WSCC and MCC schools would be on winter break.  Guess who received the paycheck that had $200 more in it:

Is it fiscally efficient to be paying a probationary officer-in-training over $100 extra per week to attend classes over one actually doing the job in the real world?  Maybe in Scottville.

Permalink Reply by Freedom Seeker on February 10, 2021 at 11:54pm
Good research and exposure, X. I hope those city officials involved realize how they may be taking advantage of the taxpayer. The City of Scottville had a good deal with Amy Williams as manager in comparison, handling manager and treasurer positions.

I don't want to pick on Alway and single him out but since he wants to be the mouth piece for Mason County while being a public official, I would ask him if he is/was aware of the information X posted. If not, why not. Being a reporter of the news it would seems that he is obligated to inform the public of questionable practices going on in local Government. Also the fact that he is part of the problem, being a City official, I would think that revealing all of these shenanigans would be the proper thing to do, that is of course,  he is not attempting to hide shady behavior that is occurring right under his nose. I'm waiting for the MCP to investigate the Scottville situation and to lay out all the related information the public should be made aware of.

Willy You will be waiting a long time Alway is a team playing no matter what the team is up to. Somehow it seems that not supporting what is going on is somehow a trader to the council, instead of a leader.  Just ask the ones who tried to make a change a few years back those scoundrels how dare they want to kick against the pricks

As the three Shatners say:  I think it's gonna be a long, long time.  It's too bad, back when Alway had some journalistic integrity, he would have been right there besides the COLDNews and myself trying to get the City of Scottville back to doing things properly, but now he's fine with doing meaningful government actions in the quietude of Zoom committee meetings where the public isn't invited, and allowing his peers to do the same.  He's cool with blocking FOIA requests of non-exempt public records.  He thinks it's totally OK to take away the visual portion of public participation at city council meetings.

I hope to be getting some idea as to whether they will continue that policy at the next meeting, I sent an E-mail to the commissioners expressing my dissatisfaction with their continuing OMA violations.

Good luck with your investigation of Scottville. I have to say that the video is very strange. The author's first paragraph presenting the video makes no sense either. One could make a comparison between that video and what corrupt Government entities are doing while we are trying to make sense of it all.