The January 11th meeting of the County Board of Commissioners of Baraga County was rather quiet and had the usual orders of business that most Michigan public bodies take care of during their first meeting of the year.  After the meeting ended, a document was posted on the Facebook site that Sheriff Joe Brogan had used during his recent election campaign. 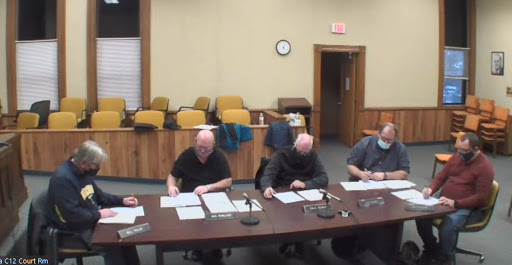 The Baraga County Manifesto posted, a ceremonial document, is signed by all five Baraga County commissioners (pictured above), along with Sheriff Joe Brogan, Clerk Wendy Goodreau, Treasurer Jill Tollefson, and Prosecuting Attorney Joseph O’Leary.  All of those officials except Brogan attended the public board meeting.  The open letter harkens back to the onerous policies of King George III that sparked the original American Revolution, and how they object to the draconian executive policies of the state and how it infringes on the basic rights of their 8200 fellow county residents.  It reads:

“Since March 10, 2020, the People of the State of Michigan have endured restrictions on their freedom which have not been seen in North America since the days of King George III and the American Revolution. In the face of a worldwide pandemic our political leadership in Lansing has ignored the protections guaranteed to all America citizens by the Bill of Rights in favor of the medical models designed to predict the course of a still, for the most part, unknown virus. The result has been the unilateral adoption of clearly unconstitutional measures which treat human beings like herd animals and which arbitrarily pick economic winners and losers. Our citizens’ rights to assemble, to freely practice their religion, to travel, to keep their property, businesses and jobs, even to dress as they please have all been swept aside, and to what end? The pandemic rages on and Lansing’s failed efforts to control the spread of the virus is blamed on the people themselves rather than the scientific community’s admitted lack of data and understanding of COVID-19.

Enough is enough. We have taken an oath to uphold and defend the Constitution of the United States of America, an oath we take very seriously. Accordingly, we hereby put the State of Michigan on NOTICE that we have no intention of participating in the unconstitutional destruction of our citizens’ economic security and Liberty. We further declare our intention to take no action whatsoever in furtherance of this terribly misguided agenda. Finally, we call upon the Michigan Legislature to exercise their co-equal authority by adopting constitutionally sound measures which limit the unchecked exercise of executive power, which restore individual responsibility and accountability, and which return Michigan to the ranks of freedom-loving governments everywhere.” 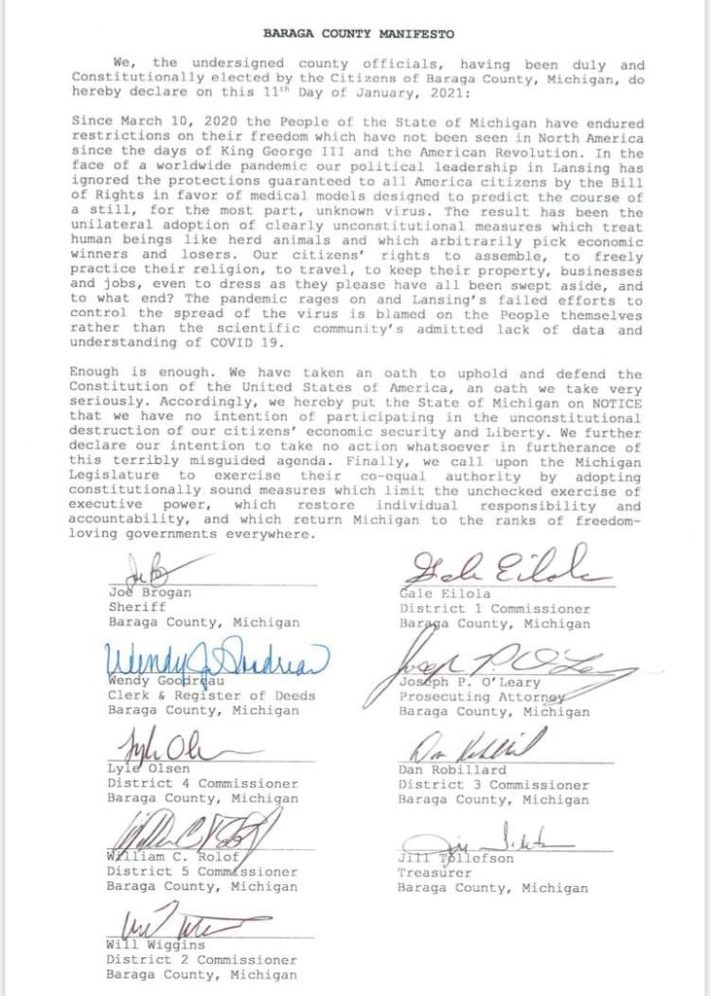 The boldness of the declaration is amplified when one realizes that sparsely populated Baraga County leads the state in death rates for Covid-19, albeit the 29 deaths reported have all happened to those 70 years of age or older.  It reminds one of Patrick Henry's immortal words: 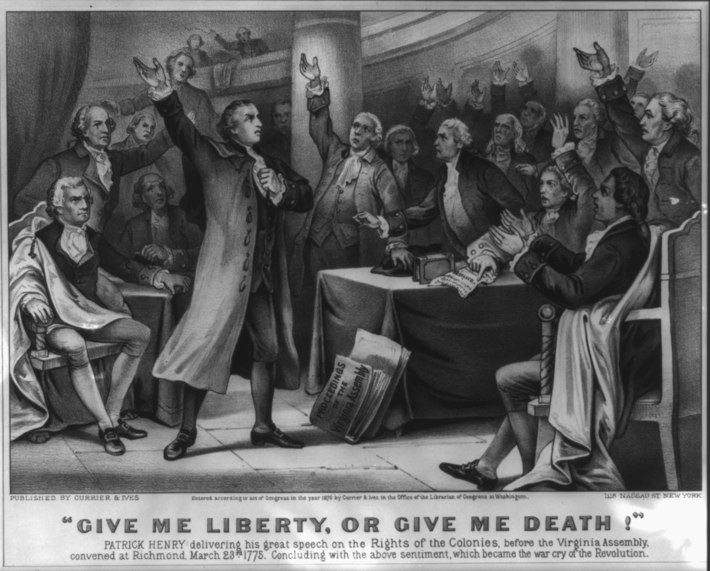 The Ludington Torch partners with Thomas Jefferson and supports the County of Baraga by affirming that when a long train of abuses and usurpations, pursuing invariably the same Object evinces a design to reduce the people under absolute Despotism, it is their right, it is their duty, to throw off such Government, and to provide new Guards for their future security.

This is as true now as it was back in 1776, and one should expect that Queen Gretchen will send her forces overseas to the upper peninsula to put down the rebellion in Region 8 before it spreads further.

Thank you Baraga County for standing up for the Constitution. Will Mason County follow with their own declaration? We now know which county will be the last to get the Covid vaccine. I didn't realize Mr Bean had a sister

In prefacing this article on the Ludington Pitchfork, I used a quote from noted economist/philosopher Friedrich Hayek explaining why corrupted power-hungry governments use crises:  "'Emergencies' have always been the pretext on which the safeguards of individual liberty have been eroded -- and once they are suspended it is not difficult for anyone who has assumed such emergency powers to see to it that the emergency persists."

Fifteen days to stop the spread has turned into ten months, half of that period was the predictable natural seasonal remission of the virus.  In the 1982 graphic novel (aka comic book) called "V for Vendetta", it looked at a 1997 dystopic future where a fascist government had taken control over the UK using the "St. Mary's Virus" as a way to take away the rights of individuals on the guise of security.  A movie based on the novel was produced in 2005-2006, and even though the movie claims the year is 2027, it is an interesting point that if the predicted events took place 15 years in the future, as the original was, you would see it taking place in 2020-21.

Permalink Reply by Freedom Seeker on January 13, 2021 at 11:37am
https://www.reuters.com/article/us-health-coronavirus-global-trust-...

An interesting study about the erosion of public trust over this corona virus.

Is that purple leather zip up jacket for real?

She really is starting to look like Dr. Evil's crazy sidekick. Yikes!

Leather isn't the only high class fashion she wears. I found a photo with her and her boy toy at a Goth party. 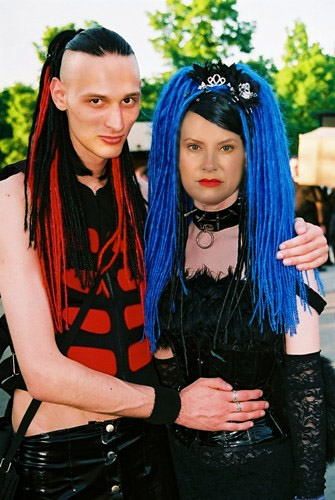 Hilarious and not far off.

She looks like a truly miserable and unhappy person...

That is what happens when you sell your soul to the devil.

Is it me or do the leftest seem even more unhappy now that they got rid of Trump?

Maybe it is because they know how much they had to cheat to steal it all and that the majority of the country actually hates THEM. They will never be happy. Watch your backs folks. They are coming after us next.

I expect Michigan may be the recipient of more Federal bailout which may be a good thing for Michigan until the U.S. dollar completely loses its world value.

The lefties are angry no matter what happens. It is their nature. Michigan could be the Garden of Eden and they would complain about a worm in Adam's apple.

This image shows how she is constantly in a mad state and she thinks her only relief is to blame conservatives and punish them. Like most lefties she is just plain nuts. We all have to watch our backs.

And don't forget, millions upon millions of illegals will be getting the money as well, not to mention all of those other countries and pork the Congress will be wasting it on. 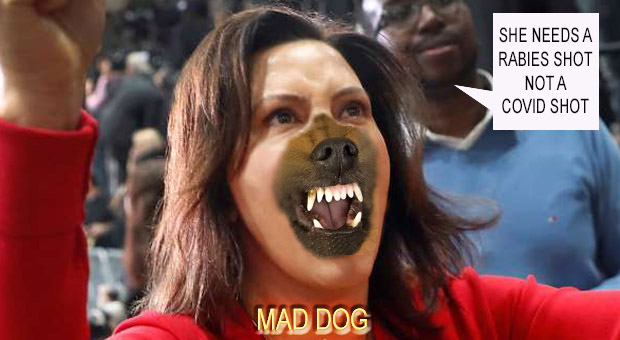