Tonight at the Ludington City Council meeting they will discuss whether to amend the Workplace Safety Policy, an actual ordinance passed on February 28, 2011 which gave City Manager John Shay the ability to ban anyone from Ludington pubic facilities without any sort of reasonable due process.  The WSP allowed the issuance of a 'letter of trespass' by the City Manager, service to the banned individual by the police, and the only potential of removing the indefinite banishment through a quasi-judicial process adjudicated by any of our contracted city attorneys. 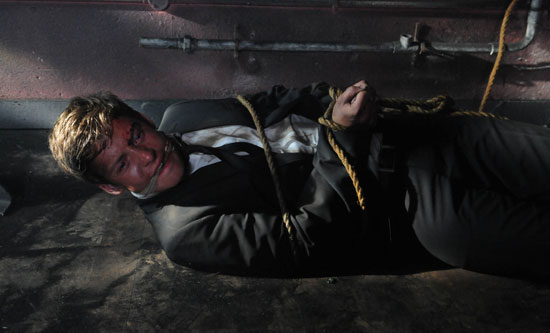 The City Manager invoked this on myself the day after it was passed, after receiving a complaint from Community Development Director Heather Venzke-Tykoski about my Ludington Torch articles.  She also complained about a fictitious third party sighting of me around her property, that supposedly happened earlier that day.  I really had no idea about any of this until after many months of FOIA requests.

The City was sued primarily on the injuries I suffered from this policy, which included a loss of employment I suffered within a week of being negatively portrayed in a City press release, a loss of the right to attend open meetings or inspect FOIA requests, and even the right of suffrage-- I couldn't vote in two elections because I was unable to go to my polling pace without the threat of arrest.  That is voter intimidation of a kind that many thought had been eradicated a half century ago.

The lawsuit over the WSP was settled, with me receiving $15,000 from the City of Ludington, and the only other action was to have the City review the policy (actually an ordinance) to correct its shortcomings.  The City of Ludington Daily News (COLDNews) notified the public of some of the revisions this last Saturday:

The new ordinance allows for some due process for an individual perceived as a threat, injury or intimidation, but still leaves a lot of room for the City Manager to run a kangaroo court for someone who may be exercising their First Amendment rights in protected free speech to be seen as 'intimidating'.  Having an opinion different than the City Manager or the complainer about public policy or official actions can still be acted upon by the City with this revision.

The proper avenue for correcting the WSP would simply be to repeal the needless ordinance.  Any real threat can be dealt with by already existing rules and laws, we do not have to give the City Manager, the Chief Operations Officer of the City, new powers to intimidate citizens utilizing their Constitutionally protected rights, and disallowing them to enter public facilities that their taxes paid for and unsound decisions like passing ordinances like this are made at.

Speaking of tax money and paying, the minor revisions to the WSP to be discussed tonight cost us taxpayers at least $1500.  These two entries below in the two October 2013 financial reports of the City of Ludington shows them paying our risk management attorneys that amount to re-write the policy.  It would have cost nothing to repeal this bad law, and it won't cost us anything in the future to pay off lawsuits when the City Manager invokes the still-unconstitutional amended Workplace Safety Policy.

The same way that they can be told they are violating state law or Ludington charter law if they do something, and then they go ahead and do it anyway, without any qualms at all.  There are no officials that hold them accountable, and little opportunity for the citizens to do so without getting ganged up on.

The new WSP shows just how much they have figured out in the last three years.

Let's not forget that the Letter of Trespass placed on me was not only for the City Hall, but for the Ludington Police Department.  It makes one feel pretty special when the most hardened criminals of all types could go to the LPD office at will without repercussions, but if FOIA-boy showed up he would be detained and charged with a misdemeanor for trespassing.

Kind of shows you what the LPD and City Hall are most afraid of.

It's hard to believe after all that has transpired the City officials have not learned a damned thing. Todd is right. If someone is causing a disturbance the police are the ones who step in and take action against the person causing trouble. Then the Court decides if a violation has been truly committed and what punishment is required. I only hope the new Council members and new Mayor are able to use their heads. This is nuts.

The new and improved Workplace Safety Policy has been approved unanimously, without any discussion other than my public comment.  The City Manager can still delegitimize your constitutionally protected dissent if he determines that it does not serve a legitimate purpose and sends you a letter.   One thing, I will say about John Shay is that he is not a Constitutional scholar, or well versed on other laws-- but I bet he would look scary awesome in a black robe and powdered wig.

The WSP was only issued after a bleach-blonde babe working there once in a great while, felt threatened by the Torch talk forum about her unethical dealings with contracts for gold leaf signage with the COL being awarded to her fiancee/now husband, Nick Tykoski. XLFD never even met her, nor her fiancee up to that date. She acted in total immature paranoia, and so did Shay/Henderson/Barnett. They are still using this bully pulpit method for intimidation at the present, and into the future. Silly, and totally wastes of taxpayer monies and city attorneys' time. If that isn't enough, yesterday, the same city council allowed the city attoneys to delve into the subject of whether Cox as Mayor, has a conflict of duty, being a reserve LPD officer. Check out the link, the LDN reports that Dick Wilson has a 4 page opinion that Cox is not in conflict of the Ludington City Charter, as would be expected. I don't see one ounce of change in the fixed agenda continuing at city hall. Cox appears to be copy-catting Henderson right down the line, and his minions as city councilors haven't changed either. The lack of transparency/secrecy seems alive and well to me so far. Sameo-sameo. X, look for mail from your buddy Dick in the very near future, he's sending you a 4 page letter legitimizing your complaint, so you won't have to FOIA it....lol.

Just as a correction, I have met Nick Tykoski several times while we were both serving on the Ludington Fire Department for a period of two to three years between 2006-2008.  As a firefighter and in my personal opinion during that time, I felt he was a quality individual.

My personal opinion of him has changed once I saw how the Downtown Ludington Board (our DDA) was handling our public money, and how he and his fiancé/wife profited from it, and then it was treated as no big deal.  But it should be; I made this point again at last night's meeting.

Also, Mr. Wilson did give me a four page opinion, and it is at least a framework for justifying the two positions to be compatible, but not a complete proof.  I will elaborate and share my own opinion on that in the near future.

I would be very interested to hear about this 4 page opinion but I have a question. Since this is a possible conflict within and between City personnel shouldn't the opinion come from an independent source such as the Attorney General?

Probably, but this opinion has no legal bearing other than it being an opinion written by an attorney using legal definitions, laws and precedents to justify their assertions.  The opinion would be a bit stronger if it came from our prosecuting attorney (who would likely come to the same conclusion), who ultimately has the decision on whether these are incompatible offices.

And whether they are may be a toss up; I lean to the side that there is increased liability to the city and the always-present conflict of interest in the mayor dealing with LPD issues.  This existed with the prior mayor with the LFD as well, since he could hire and fire the fire chief at will, and the fire chief could fire the mayor (from the LFD, where he worked) at will.  So if Chief Funk ever got to the point where he was forced to fire FF Henderson, Mayor Henderson could fire the chief and vice versa.

If the new mayor and police chief ever become at odds with each other similar things could happen, and worse, since Mayor Cox's wife is on the LPD too.  For this reason, they may look out after each other's backs, and this would be unfortunate if we have more police misconduct cases come up in the future.  One could hope that the mayor looked out more for the rights of the citizens that elect him rather than his 'fellow' police officers.

This was OK with Henderson by the Incompatible Offices Act because of the exceptions within that includes volunteer fire department personnel for small departments; there is not a similar exceptions for volunteer police officers.

So the Mayors wife is works for LPD?? Wow, can you post the facts and truth behind this statement?

"Cox serves as a reserve officer for the Ludington Police Department and most recently served as co-chair of United Way of Mason County’s annual fundraising campaign. He and his wife Tracy, a Ludington/Scottville police officer, have lived in Ludington for six years."

I haven't been apprised of any recent career change since last May.

So an article printed 8 months ago.Alright, I guess the rumor I heard a month ago that she no longer works at Ludington anymore is wrong.  Lets be on top of things before we just start putting up statements.  Hard to believe anything you say now when you are wrong.

You can deal with rumors all you want, 'Johnny'-- and you do-- but I like facts better.  She was working on LPD/SPD in May, this was noted also as late as October, and one would think the Mayor's wife resigning her job on his police department is newsworthy enough to make the papers.  But this is Ludington...

Still, if you or anyone else can verify her loss of employment at LPD/SPD, I'd like to know.