Harbor View Marina since its inception just before the turn of the century and until this year was a privately ran marina.  It was an experimental public-private partnership between a limited liability company loosely affiliated with Lake Michigan Carferry and the State of Michigan through the DNR.  For its part, the state effectively carved out the marina and Harbor View LLC constructed the facilities, including the swimming pool and the clubhouse building seen to the far left below. In their lease with the State, the LLC could operate the marina as a private entity, being that they paid the state for the privilege and paid a substantial amount of City property taxes (over $70,000 per annum).  When the LLC decided to default from the 25 year agreement prematurely, likely seeing that neglected maintenance issues would start cutting into profits, the State really had nobody else in mind to take over running the marina than the City of Ludington, already operating a supplemental fully-public marina about two blocks away.

Harbor View then became a fully-public marina, owned by the State of Michigan. leased and operated by the City of Ludington.  In my second public comment to the Ludington City Council on June 22nd, I made it clear that the swimming pool and other related facilities at Harbor View were now open to the public, their lease with the State even saying so:

I informed them then that I would be using the pool and expecting them to void the unneeded contract with a local condo to use the pool, as it's open to them already.  At the meeting the council ratified the condo agreement and ignored my points, as often happens when there is no easy refutation to those points.

I asked via E-mail for written permission from the State that the City needed in order to contract with the Condo association, as per the City-State lease agreement the next day, I was informed that there wasn't any such permission granted.   I eventually received a letter from a Lori Ruff-Green of the DNR dated June 25th giving her approval of the condo agreement; she wasn't any of the administrators for the State in the lease agreement, nor a signatory to the lease, she's just a low-level DNR bureaucrat who doesn't have the authority to approve a sublease agreement that violates the clause shared above.  I noted in finishing my thoughts to City Manager Mitch Foster:

"I will be humbly using the swimming pool this week (June 28-July 4th), because it's going to be a scorcher, and I really don't want grief when I'm relaxing in the pool. I also think the condo association is due a refund. See you poolside if I'm still there after 5 PM."

A more important mid-level manager stepped up via E-mail then, Jason Fleming, DNR Resource Protection and Promotion Chief, Parks and Recreation Division, but yet still unimportant enough not to be listed as an administrator for the lease agreement.  He reasoned, without any guise of using any kind of legal authority to support his case:

"It’s a little complicated, but it usually goes back to the funding source. Waterways funded facilities are meant to be for boaters and not the general public. Mi. Natural Resource Trust Fund are open to all public. The facilities were developed independently with private monies in a joint agreement with the State and City. With the business defaulting to the State, we put this into the Waterways property.  So the pool is not open to the general public."

I looked deep to find law, or even standing DNR rules and actions, that supported his claims, but found nothing, which is probably because it's pure hogwash.  When the LLC defaulted their contract, the facilities went from being part-private to fully public, the lease agreement consistently backs that up.

As per previous agreements between the DNR and the City, they require the City to keep "facilities open to the public at all times on equal and reasonable terms and that no individual shall be denied ingress or egress thereto".  I finished off my lengthy E-mail to the city manager explaining officials' obligations:

"... I will be using the HVM shower, spa and swimming pool, because they are all public facilities now and you and these senseless bureaucrats citing no authorities from the state can suffer the consequence if I am denied ingress on equal and reasonable terms. Please refund the money to the condo immediately, it's fraudulent if you don't, unlawful because you didn't have written consent from the state, and let them know they have access to the facilities nevertheless. Also please make sure the security cameras at HVM are running properly, so that they can record any interaction I might have with city employees who think they are running a private club and not a public swimming pool. Hope your Fourth is as full of fireworks as mine will be."

Those from the public who approach the pool are rebuffed by a couple of signs, the first of which tells you right from the start that you are not welcome due to 'pool rules'. If you decide not to read the fine print on that sign, another one with a lot bigger, upper-cased letters tells you that what's beyond the gate is "Private:  Harbor View Marina".  This is a holdover sign from when the marina was privately-run and no longer states the truth.  Harbor View is not private at all; when you pay for a slip there now, you can't arbitrarily keep the public away from the common areas-- it's in the lease. 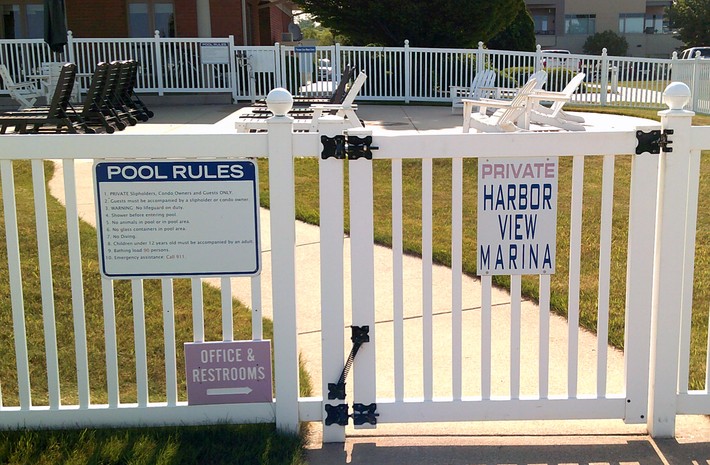 Earlier today, I approached the southern entrance to the clubhouse in order to access the showers before taking a dip in Ludington's premiere public swimming pool.  I couldn't help but notice a fitness room before finding the showers, that might be interesting to use on a more inclement day.  But it was very hot, so I went to the showers and prepared myself for the swim, you can't be too careful during a pandemic. 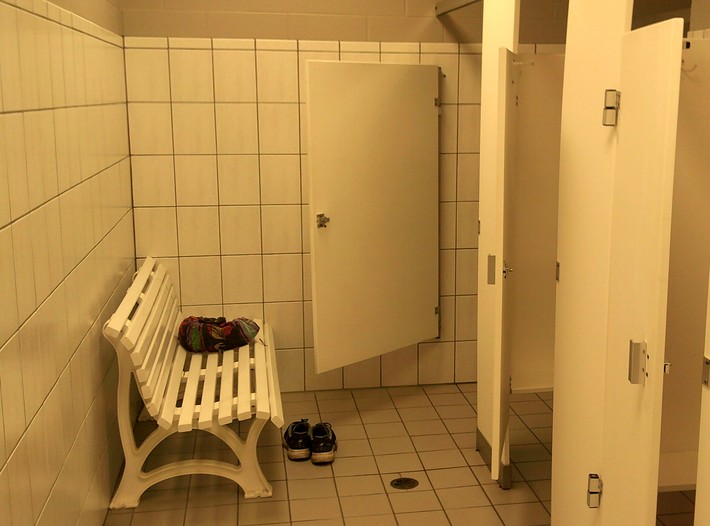 After changing into my trunks, there would be no Speedos after four months of Covid-19, I noticed the clubhouse was unmanned during the time I arrived, and I never saw anybody for the hour I was in the pool area other than people enjoying themselves with frothy beverages, socializing, swimming, and sun-tanning.  I eventually dragged myself out of the pool and took a picture of the scene, including my lower extremities, ragged towel, and moist path from the pool. The hour I spent there was enjoyable, although I would recommend to fellow citizens to take a friend or several.  Definitely plan to be back during this heatwave.  If you arrive and somebody tells you that you cannot be there because you are not a privileged class of person, be sure and let me know about it, because that's just not right.

If you're a Ludington taxpayer, you're now shouldering the $75,000 tax shortfall created when this parcel went off the tax rolls, reclaim some of that back by inviting your friends to an impromptu pool party at the new public swimming pool.  All drinks are welcome from what I saw.

Permalink Reply by Freedom Seeker on July 3, 2020 at 5:53pm
Interesting research, x. You've got the trunks! How nice it is to have a public outdoor facility for all the bad the locals have been having to put up with in excessive fee increases for sewer and water and tax valuations and sewer stink and draconian code enforcements. Anyone in our government who wishes to take this away from the public is just petty and mean.

Petty, mean, and willing to ignore every current law on the books regarding public facilities and every agreement between the City and the State regarding the public's ability to use of these marina facilities.

What a nice gesture, having both the splash pad  and the marina pool open to the same week, just in time for the heat wave.

How are parking accommodations around there? Will Dial a Ride be servicing the area? Can they get you close enough to the pool if you are handicapped?  Seeing as it is a public is the pool wheelchair accessible? What about the shower area?

Is there a spa? Washing machines? A grilling area? Do the have an adequate supply of pool furniture?

Is there a demarcation line between the condos and the public areas?  Wouldn't want to trespass on the condo owner's property.

LPD Officer David Krause continued to be on the LPD force for at least ten more years after he stopped me in 2008.  He was the SSCENT officer for a time, interestingly he was the undercover cop who nabbed Gene Foster for selling medical marijuana (w/o profit) to him after claiming he was from out of town and needed some MM for his medical condition.  I've reviewed those records, and it had all the characteristics of being an illegal sting operation, which is a big reason why Foster eventually got a slap on the wrist for his part even with a suspect public defender on his side.

He is now off the LPD, but I have heard a rumor he's still in law enforcement.