Designed Not to be on a Level Playing Field

An ice rink installed in downtown Ludington for the winter that requires little maintenance because the ice is synthetic, sounds like a dream.  But that dream came true this winter when the DDA Marketing and Communications Director convinced enough downtown shopkeepers to invest their hard-earned pennies into buying boards of synthetic ice that was to be installed in the James Street Plaza.  The mood was ethereal on the installation of the 4' X 8' boards where coat-clad gnomes came out and stomped together the pieces, no need for high-priced contractors to do that. But then the dream took a bad turn.  As noted in rink of dreams, where the history of the rink is covered outside of dreamland, the clearing off of the rink when frozen water actually precipitates on the surface of the rink was seen to be problematical and hazardous.  The difficulty of clearing the rink of snow or ice with just a shovel had the rink unutilized in most of January, February, and half of March, when the last of the snow finally melted off.

But the dream only turned worse.

Synthetic ice has its limitations.  One of these is that the surface it is put on has to be flat, you can't put this on an irregular surface and be certain that its seams won't fail, and the boards won't 'warp' to conform to the uneven contours.  The James Street Plaza is not flat.  It's composed of stamped concrete with brick pavers checkered throughout it, much like most sidewalks in the downtown.  Here is an overhead view, with the highlights approximately showing the location of the rink. 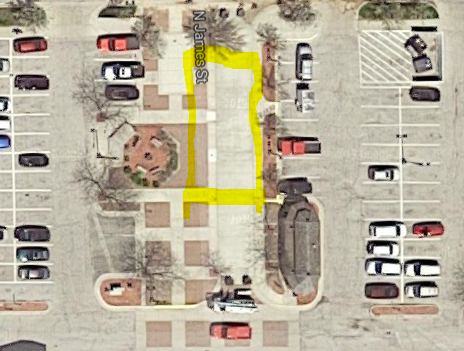 As you might be able to detect on the far left part of the very first picture, under the cut boards that may have been used to try to level the rink, are brick pavers.   Anybody who has walked in the downtown notice that although these bricks lead a certain hominess to the city, they also have a tendency to be a tripping hazard for those not paying attention because they are at different levels than the concrete.  The Planning Commission addressed the very issue of removing bricks in the downtown area in 2015 due to the hazards it had created, but it had been noted at other boards over the years.

The synthetic ice sheets cover up these tripping hazards in the plaza area, but alas, they then become the tripping hazard.  The seams between boards create a danger that you don't see on your normal ice rink, the ice shelf: 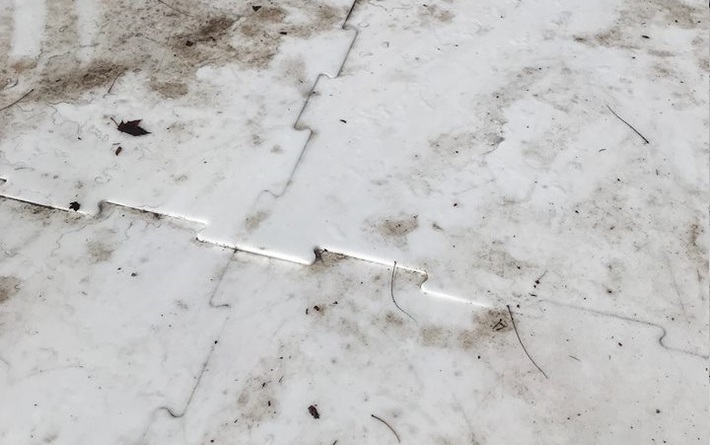 It may not be that clear in the pictures, but these seams are raised up nearly a centimeter, over a third of an inch, and capable of taking down a skater onto the hard surface when they're not expecting it.  Worse, if the rink actually gets used and skaters are able to use caution when skating over the ridge, the $500 synthetic ice board gets damaged and/or ruined over a lot shorter time than its expected life. Worst yet, the City's DDA, by not using the synthetic ice panels the way they are instructed to by the manufacturer (i.e. on a level surface), subject themselves to liability for injuries sustained and the additional costs of getting replacement panels for the ones damaged and warped through the misuse.

It's all a potential liability that may fall back on the City of Ludington and their officials just because they can't draft by themselves a suitable plan carefully thought through in order to put in a facility designed to foster a fun activity in a proper location.

Did somebody mention something about a splash pad in Copeyon Park?  Oy! Wow, those close-up pics. sure look very dangerous to try and skate on, both for kids and adults. By not following instructions for installation properly, they have voided any warranty that was available most likely. When these great city projects are installed, you'd think the guys would observe some technique and finesse, but that's obviously not here.

I had a side bet saying that this rink would be disassembled by the end of tomorrow, I was even a little surprised it was still up at the end of today, since I'm sure our city leaders don't want people to see the dangerous situation that I documented with the above photos.  I encourage everybody to check the rink out before they do take it down and see the hazards in person.  You might want to also notice the disrepair and lack of upkeep of several of the banners due probably just to the wind.

Permalink Reply by Freedom Seeker on March 19, 2019 at 7:32pm
Are those generic pictures of what can happen, or are they actual Ludington pictures? Kids look cut and pasted falling off and above the rink?

The picture with the kids in the article are from the COLDNews picture archives, taken when they expanded the size of the rink in January.  Willy's picture has a little artistic license, but indicates the big holes in budgets that our poor kids will face.  The $120K the DDA gains from taxes and TIF each year (and usually wastes) is a drop in the bucket when you consider the $50 million in utility debt of the City, the uncontrolled city pension burden growing seemingly unbounded, and the school system seeking over $100 million for upgrades above and beyond the normal, which will likely be passed.