On March 10, 2020, Governor Gretchen Whitmer declared a state of emergency in Michigan.  While the policy's strictness has waxed and waned over the last thirteen months due mainly to the state legislature's attempt to usurp the governor's authoritarian dictates, the governor's policies mostly live on through the state's health & human services department.

Over that thirteen month period, public bodies throughout Michigan have been strongly encouraged to hold virtual, electronic public meetings.  State strictures allowed that method until recently, when new laws sunset that possibility barring a state or local 'state of emergency' (LSOE) being declared.  As legislators were reluctant to declare such an emergency in the state and allow the governor to reenact what she did last year, some Michigan counties and cities enacted their own local state of emergencies.

This could explain the timing of the well-publicized resurgence of Covid throughout Michigan counties prior to this sunset reported in the news.  It allowed a justification for county commissions and city councils to invoke local state of emergencies after thirteen months of no such declaration.  Why were these emergencies declared throughout Michigan, even in red counties like Mason which has had one reported Covid-19 death over the last three months?  Let's find out.

At the April 12th meeting of the Ludington City Council, they passed a Resolution recognizing the LSOE declared by the county board chairman, Janet Anderson the prior week, and set to be extended on April 13th by a supposedly conservative county board to June 13th.  The resolution wasn't made available to the public before the meeting, but the nine page document outlines a plethora of reasons why a LSOE exists, and procedures the council can follow during that time:

True to form, the county commission unanimously passed the extension to June at their meeting the next day-- with considerably less justification: 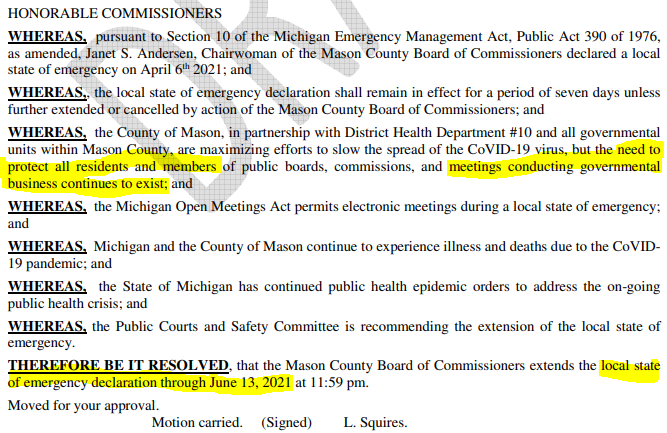 Yet in looking at both resolutions, it becomes abundantly clear, even through the city's 9 pages, that the only thing to be achieved through declaring and observing this LSOE was to justify the holding of public meetings remotely and electronically.  Nothing else is gained by local politicians, which is a good enough thing, but we are still going through a state of emergency throughout the county for a 'pandemic'.

One would hope our officials would sell this local state of emergency by their later actions throughout the community, in trying to prevent non-essential gatherings where spread of the virus may take place.  After all, if they plan to cancel public meetings over the next three months over the LSOE, why would they practice unsafe behaviors that would only create more potential spread during that time?  Three days later, the city manager and building inspector would drop by the WMOM studios to discuss a variety of topics.  Not amongst those topics was the newly declared LSOE, and the many pages of justification for it made by the City of Ludington.

Having sat in that same small studio, it seems somewhat crowded when three are in it.  The ten foot long table allows two to be on either side and one in the middle and observe proper social distancing, but in the midst of a LSOE, we observe that neither of the participants utilized a mask for this radio interview:

For the meeting on April 12th, everybody was forced to wear a mask to participate, but we heard city councilors and other officials explain how dangerous it was to sit farther apart than these people at WMOM were, even with masks on and vaccines readily available to all officials present, and why it was best to conduct the next meeting of the city council remotely for the reasons of public health and safety.

But then you have the additional issue that you have an unmasked 'building inspector' talking about visiting homes and apartments while conducting rental inspections during this time where coronavirus and its variants are presumably running rampant over the state and this county especially.

While the county and city suggest you stay home and avoid contacts with other households in this LSOE, the city sends their rental inspector conducting non-essential inspections into a renter's home, often accompanied by the landlord, and promotes spread of the viruses in the place where it is spread the most often, a residence.  At the same time, he goes into an interview on the radio, which could have easily been done remotely, without a mask and in a small studio with questionable ventilation.  One would think that if local officials want to market their local state of emergency, they would at least go through the necessary theatrics. 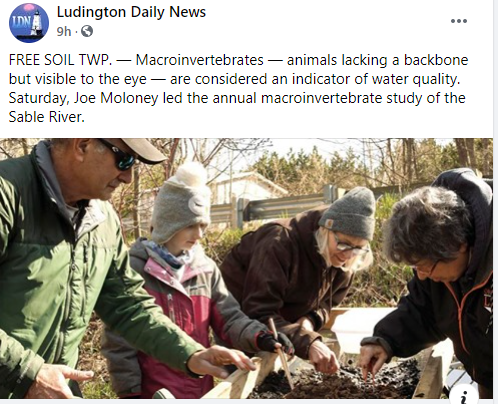 Today's entry.  At the Ludington City Council meeting held one week ago, City Councilor Kathy Winczewski led the charge towards making the next meeting virtual.  "We're at the height of the pandemic, that we've never seen before, right now. So it makes me very nervous that we're here in person at this point... I feel definitely we move to Zoom in two weeks."

Today's LDN shows a picture of Councilor Moonbeam with three other members of the public unmasked, within feet of each other, touching common ground.  They too are unmasked and are not all of the same household.  This constitutes a gathering (outdoor) where state guidelines mandate that all participants have masks and social distance 6 feet away.

Maybe being vaccinated makes people feel safer?  But if so, why not at City Council meetings?

Permalink Reply by Freedom Seeker on April 19, 2021 at 4:07pm
So is this like five days later, the courageous change of heart to meet with people, who look at microinveterbraes, but not her constituents? Or maybe it is because she considers Tom Rotta, a big worm with a spine, standing before city council that she wants to shut down city council and socially isolate? Gotta lose your spine, X, and maybe city council will meet in person. Hahahaha!

She lives in a make believe World! 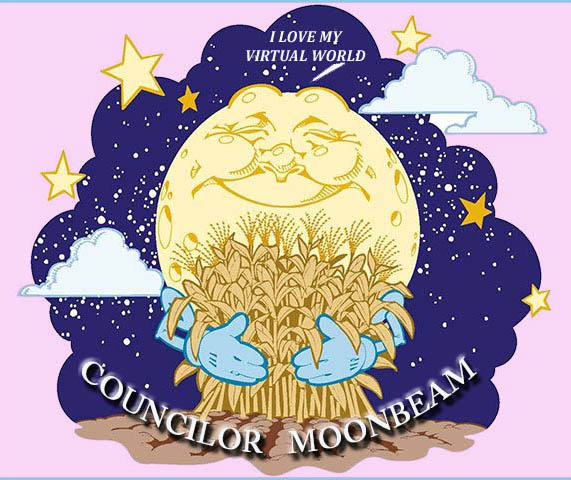 Permalink Reply by Freedom Seeker on April 20, 2021 at 7:41am
https://www.wxyz.com/news/coronavirus/gov-whitmer-facing-travel-bac...

And Whitmer goes to Florida.

Is anyone really surprised? When will the people of Ludington stand up to these tyrants?

These latest examples of hypocrisy further prove their distain for the citizens of greater Ludington. The leaders do not even try to hide their hypocritical behavior anymore. Of course they don't want public meetings or to give us access to their secret meetings and blanket actions. They have so much control now that they will never give it up.

I am heartened to see that parent groups across the country are starting to stand up to school boards and teachers, but until we get together and expect more, we will continue to get less and less.

Another shameful week for Ludington leaders.

On a final note... please STOP wearing masks outdoors! People that are vaccinated are still wearing masks indoors and outdoors. This is true insanity. I do not wear masks outdoors EVER and have started wearing my indoor mask under my nose ALWAYS... no one has said a word to me. Get brave folks. We are powerless in so many ways now, please be courageous and start taking what little power you have left back. We should be able to decide NOT to rebreathe dirty air into our lungs... and NOT to follow the weak leaders of Ludington and certainly not Heil Whitless.

Transparency is a buzzword when our city councilors get into debates around election times, and how they will strive to make city hall and public records accessible to all (then vote against reasonable FOIA appeals).  They show their true colors when they debate this topic without any nod to transparency or the fact that a significant portion of the public cannot make such meetings, nor would many others want to because of the limitations on interactions inherent in such affairs.

I've been consistent throughout the plandemic in wearing masks only in government buildings, where you consistently see gathered, unmasked officials cavorting with themselves behind their plexiglass shields.  This is due to the fact that they have all bought into the hype that keeps giving them more money and power, even when it leads to leading America into a bad place.  Prosperity for them and their peers comes at the cost of wreaking havoc on the American system that has led to our overall prosperity.  If they catch you without a mask, one who has not been anointed as one of them, they will need to make an example out of you.

The illogic behind the new system leads to hypocrisy running rampant; you don't even have to look that hard.

Nothing to be concerned nor surprised about whether local, state, of federals in our government public sector. These guidelines and rules are all for thee, NOT ME!