On February 22nd and later on March 8th, Ludington's city council approved the creation of a social district for the downtown area and expanded it.  The general idea  behind these areas are to make it easier for restaurants and bars to take advantage of public outdoor spaces for customers to social distance and drink from open containers purchased at their facility.

This wasn't a knee-jerk response by city hall; the legislation that allows these districts was signed into law by Governor Whitmer in July 1st, 2020 and adopted shortly thereafter in many locations throughout Michigan as a response to allow bars and restaurants the ability to operate more normally in the midst of restrictions that allowed most downtown businesses to only offer curbside, to-go dining.  The Downtown Development Authority (DDA) explored social districts back in late June 2020, unanimously recommending the creation of one back at a special Zoom meeting of that body on June 26th (that wasn't noticed to the general public and thus in violation of the Open Meetings Act).

The recommendation lingered for months as it was sent up to the Buildings & Licenses Standing Committee and floundered until the beginning of 2021 as they tepidly researched the issue.  Had they been more thorough in this research rather than concentrating primarily on anecdotes from other communities and not on how it would affect Ludington's overall situation, they may have come to a better conclusion.  Only Councilor Les Johnson, who owned a local party store, voted against it, stating that he wanted to help businesses, but didn't see anything positive in that regard, just like me.

The DDA were hoping to get the social district underway by St. Patrick's Day, the first social drinking holiday of the year, but only one business had their license back from the state by then (four currently have their license).  They have put sidewalk signs on street corners defining the Ludington Outdoor Social District (LOSD), if you walk down South James or Rath Streets you're likely to see these at some point: 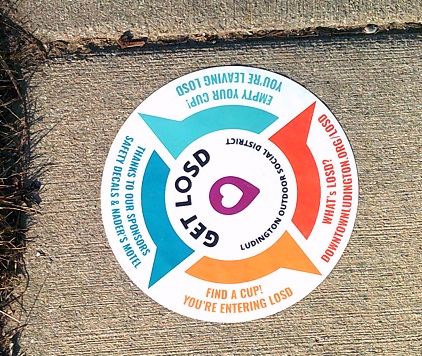 On entering the district, you see the orange logo telling you to find a cup, when you go back that way you are instructed to empty your cup since you're leaving the LOSD.  If you read further, you'll notice that the community development director's business (Safety Decals) is a 'sponsor' of the district, so at least her business is doing okay with this district.  If you wonder how this sticker is attached to the pavement in some sort of permanent way, it isn't, it can peel right off.  For those wanting to play with the 'social drinkers' all you have to do is lift them up and turn them 180 degrees.

As noted, the district expanded from being primarily on South James Street and neighboring alleys to spread out onto Ludington Avenue by the second council meeting.  The weird shape of the modified social district is shown below, allowing LOSD drinkers to cross busy Ludington Avenue with their beverages without issue.

The two main problems with social districts is that they promote the public's perception that the local and state government is condoning drinking and wandering about, one could even say the sidewalk signs encourage people to drain their glass when they get out of the district.  Most people travel by vehicle, so if they order alcoholic beverages while waiting for a seat when only 25% of a restaurant/bar is open, they may give up and go elsewhere by walking or by car and have nothing to absorb the alcohol consumed, all while believing that their behavior is condoned with the LOSD.

The second problem is that the LOSD is nothing but a restriction on the rights of those drinking in Ludington from what they had before.  The State of Michigan has little to say about how cities restrict their citizens and retailers on the use of alcoholic beverages.  The main restriction is MCL 436.1915 which only restricts consuming alcohol on public highways (not carrying a glass on a crosswalk) and says alcohol:  "may be possessed or consumed in public parks, public places of amusement, or a publicly owned area not licensed to sell for consumption on the premises."  The only limit to this right is a local government unit restricting that use in certain public areas through the use of their municipal powers.

When one looks through the Ludington city code and charter, one finds very little in terms of restrictions on drinking in public places.  The only public place where alcoholic beverages are prohibited are at cemeteries, at Cartier Park campground at certain times, and hard liquors at park grounds (beer and wine containers must be in containers less than two liters).

There exists no local or state laws that prohibit anybody from walking on the sidewalks and parks throughout town while imbibing a two liter bottle of your favorite wine or beer.  In a city that has placed a lot of restrictions on drinking outdoors, you may need social districts if your council is unwilling to change those restrictions to help their local bars/restaurant, but you won't need that in Ludington.

Those expensive stickers on the sidewalk are useless, those expensive cups and cup stickers used are equally useless, those special $250 permits being sold by the state to allow restaurants/bars to join a social district is a useless expense.  These costs are borne by the downtown businesses who supposedly benefit from social districts, with that fee and licensing money going to the local and state government.  The LOSD bars and restaurants need to pass that cost to the public by making alcohol purchases more expensive to recover their losses due to these costs.

Our well-paid public servants, especially that one who's making money by selling sidewalk stickers, tell us that this extra cost will not negatively affect sales, but if those bars in this district raise their drinks by a dollar, they will lose business over time when the public finds out they can get better deals from those outside the LOSD.  Especially if they figure out they can walk to almost any public area in town with their adult beverage. 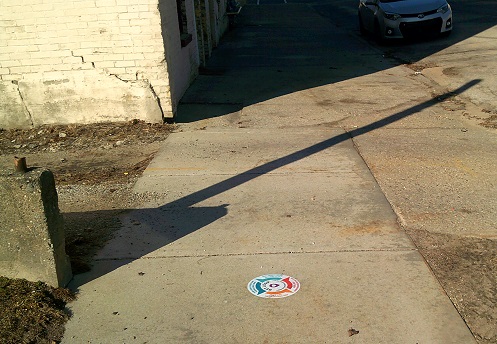 Another excuse to get drunk. Thanks City Council 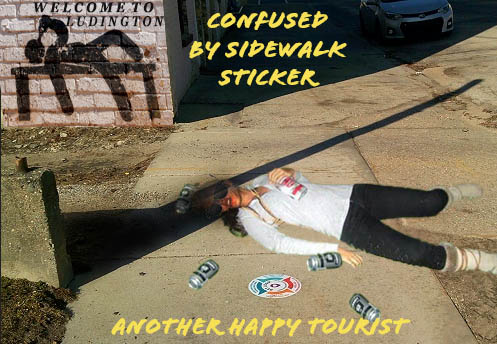 Brilliant, Willy!  It looks like the Gretch took a stumble (and got skinnier, while waiting for food?).  shinblind has an excellent point about having a bench and a toll by the local winos.  And bright pink sidewalks.  More signage to tell drivers they are entering dangerous driving zone, and many porta potties sitting in the pink sidewalks.  But maybe Manistee will take away the drinking tourists with the Princess moving and our streets will be a struggling drunk zone.

Thanks FS. When I altered the photo it looked funny but looking at it today it more resembles a crime scene. The only thing missing is the yellow tape.

Another thing missing, Willy, is the Gretch in that blue dress she wore to one of her first public addresses.  The one where that extra material hanging off the front tried to hide her .... (is that politically correct, or should I say midsection.)  I do understand she may well lose weight if she drinks most of her meals.  I haven't been paying attention much lately usually behind a lecture and a face mask.

DW and FS I don't believe I have ever seen a picture of that dress. Thanks for posting it FS. It makes a tempting Photoshop challenge.

you're welcome Willy. It gives a new meaning to "blue dress." And she did her best to defend wearing it, but I mean really, does she not have dressing advisers.  Who would have let her out of the house in that dress?

I helped her out a bit and gave her an Easter colored dress and matching ears. I didn't want to be to mean seeing how i'ts a sacred Holiday. 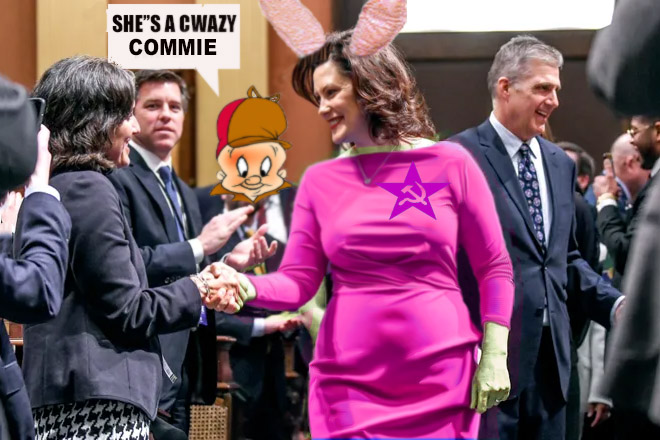 Someone should look in the mirror and decide the puss gut just just isn't in fashion. 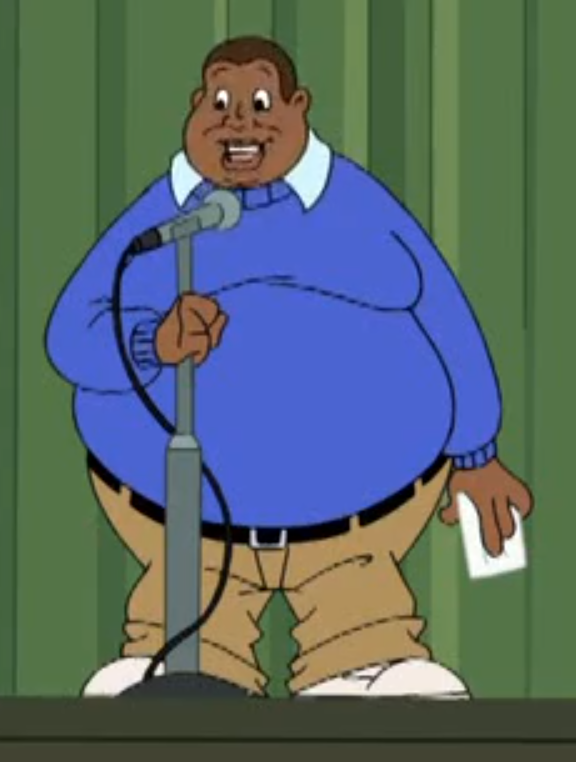 Good color, Willy and star-commie lapel sticker.  Even though Whitmer shot back and used the sexist-card in her defense, do you think that if a male governor who was heavy in the belly wore spandex pants and shirt without a jacket, that he wouldn't get media flack, especially if he wore red?

Or what about a transvestite governor wearing a yellow spandex spacesuit with no jacket?

Another thing that bugs me that the Gretch used the sexist-card, is it fair when male newscasters are required to wear shirt, tie and suit jacket, should the women be allowed to wear plunging spandex shirt without a jacket?  Thanks Willy for the lasting vision of the pink spandex dress.

FS. I would think she would be in tune to what heavy people look like in revealing clothes. Not very flattering. She does however make a good "mass enhanced" Alberta. 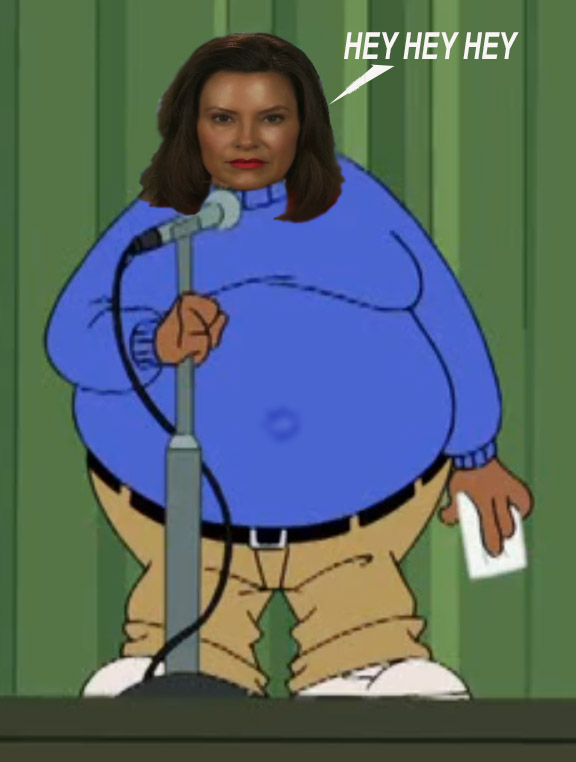