A recurring commercial urging people to wear masks says that wearing masks are 70% more effective in fighting the transmission of Covid-19; several other similar claims are made on other media sources.  Such claims rarely, if ever, cite their sources, expecting you to believe them and mask up.  A couple studies looking at an outbreak on the USS Theodore Roosevelt and one based in Thailand have numbers that assert the 70% figure in a very limited population with methodologies that aren't scientifically strong.

We can draw some of our own conclusions by looking at the shear reality of how countries (or states) that have high mask-usage rates fair when compared to countries (states) that have low mask usage in terms of death rates and case rates.  Please accept that case rates may be misleading in this topic, as some countries (states) have different protocols for testing-- some may only test those people who have symptoms while others may universally test parts of the population.

A November poll of adults in various countries across the world showed the prevalence of mask usage in those countries, these percentages vary quite widely in these countries: 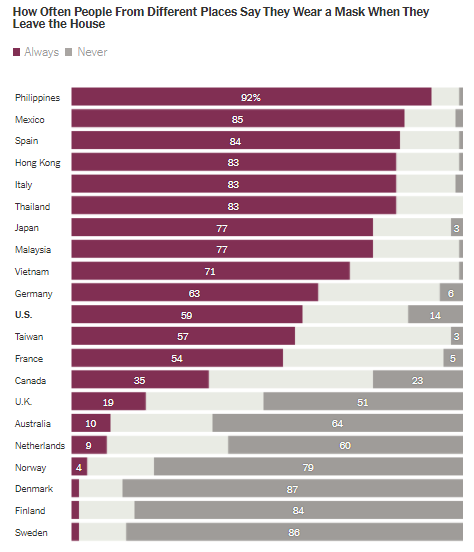 The six countries at the top have at least 83% mask usage, almost universal usage, while the six countries at the bottom are all less than 10%; this is a substantial difference in usage.  Let's compare the death rates, case rates, and test rates of Covid-19 for each of the twelve countries using the latest stats courtesy of Worldometer:

The six countries with high mask-use rates have death rates on average 77% higher (536/302) than those six countries where almost everybody doesn't wear a mask.  Case rates are 37% higher among those countries that eschew masks, but their rate of testing is more than twice as much as the masked countries. Let's consider the 50 states observed with the same microscope and find if that's the case in our country.  According to a nationwide poll recently taken on mask usage and published in PR Newswire shows the difference by state of mask usage (regardless of mask mandates).  As ranked by that poll, here are the n highest mask-usage states followed by their death and case rates again supplied by Worldometer (states):

The numbers aren't as dramatically different in regard to mask usage in states (the sixth lowest state, Idaho, still has 73% of its citizens using masks) however, the death rates are lower in those states, though not statistically significant (1124/1176).  Yet the case rates for lower mask usage states is nearly twice of the maskers, while the test rate is nearly half.  This implies that covid-19 cases in those states are about four times less likely to be fatal, but that is in no way conclusive.

Mask usage is one of many factors in the transmission of Covid-19, but why does it appear that those countries that use masks religiously suffer more deaths to the virus than those countries where there is little or no use of masks?

I believe that social distancing may be the best practice for the vulnerable population. Let the rest of the world live, work, eat and play. Likewise, for the vulnerable people who should take care to isolate themselves, mask usage and all other precautions when they have to go into public is better for a time than risking the disease. As well, those who have the disease should strictly isolate until well. The trouble with this disease is that many do not know they are carriers and they can spread the disease.
There are cases that Covid-19 has morphed in England and is on the rise there. I don't think we should be cavalier and not take precautions for vulnerable population. Science does not yet know how long natural immunity may last, whether the morphed virus can infect someone who had Covid-19, and the time effectiveness of the vaccine is not known either yet. It may be a yearly-needed shot, much like the flu shot is, morphing every year. And therefore, it is recommended by most doctors and study groups that those who have contracted Covid-19 and built natural immunity, should still get a vaccine when available.  Below is a link my doctor sent me regarding getting vaccinated.

I went to Meijer and Wal-mart yesterday afternoon, and both places had several hundred people shopping, some were members of vulnerable populations (old, obese, etc.).  This is occurring during a time when restaurants, bars, libraries, churches, etc. are closed and most others have very limited capacity (indoors <10 people).  I would argue that having everyone informed and having everything open without mask requirements would be as safe a policy as what we have now.  Instead we get junk science, fake news, shutdowns, and mask policies that infer that we must radically change our society to protect it, while what's happening is our society will devolve from risk/reward capitalism to no risk/no reward socialism.

I'm reminded of a Bush 43 quote made a month after the attacks on 9/11/2001:  "The American people have got to go about their business. We cannot let the terrorists achieve the objective of frightening our Nation to the point where we don't conduct business, where people don't shop. That's their intention."  If we consider that the goal of some media, politicians, and scientists nowadays is the same aim as those terrorists on 911, we gain the ability to objectively observe why these insane policies were implemented and the implausibility  of the propaganda that supports them continuing.

Quite an amazing amount of research and info. here X. And also quite useful and interesting results. Thanks for the thread and education on these matters of urgency nowadays.

It may be a gift or a curse, but I at least have a knack for recognizing patterns and reading through statistics.

While looking at the mask-usage graph for countries reproduced above, I noticed a few countries that were hard hit now and back in April had high mask-usage, while several at the bottom of the graph were lightly hit.  A comparison of death rates strengthened that hypothesis.  It's a lot more dramatic when you focus on Europe and compare the top 4 masker countries with the lower four no-maskers  (a 3:1 ratio in death rates).

An actual gift I have is not to draw conclusions from these comparisons gained through scientific inquiry.  Mask-usage and shutdowns are not the only variables in these stats.  Maybe the same reluctance to wear masks in the Scandinavian countries listed above is part of a culture where other factors come into play that reduces Covid-19 fatalities.  Maybe the differences in ethnicity is a factor in survivability, maybe their general diet, etc.

Science was spotlighted throughout this pandemic as being the only road to truth, but the scientists and science spotlighted have trended towards politics and propaganda, the science and scientists questioning the junk science presented are muted by this cultish clique like heretics were by the church back in the Dark Ages.

Thanks for the article X. I think this has to do with how the information is gathered, who gathers it and what criteria is used to tabulate and catagorize it.  My biggest problem is what to believe. The WHO,CDC and the AMA have lied about Covid19 as well as the media. They Lied about how it started, how to avoid it, treat it and basically ignored science in favor of politics and scaring the crap out of people. How is the public supposed to make rational decisions when we know that much of the information is skewed or false. From China to Dr.Fauci, all have lied.  We still don't really know how many people have died from covid19 because of the shenanigans with how deaths are tabulated. Like the gun shot deaths in Colorado that were listed as death from covid19 because they had the virus in their  bodies. I doubt the death toll from Covid is anywhere near what has been reported. Let's not forget that a very small segment of the population will die from Covid even without a vaccine. I have more fear from the flu  because there are so many cases, even with the flu shots. And people of all ages die from the flu especially children. Until people say enough is enough, the deep state will continue to do whatever they can to keep their boot on our necks. The Climate change hysterics have been replaced by the Covid hysteria.