Diagonal Beach Parking: Nothing Gained but a Dangerous Situation

Last August during the midst of a pandemic, somebody came up with an idea to create more parking down by the beach by creating diagonal parking alongside the Jaycee's mini-golf course block on the north side of Ludington Avenue.  Honestly, this was a horrible idea from the get-go and I explained some of the reasons why in The Dangerous Dune Diagonal.

When it came before the council at their next meeting, my public comment urging them to drop this bad idea had a modicum of support from Councilor Angela Serna who opined:  "...It's an accident-- an accident waiting to happen."  She offered a crudely made illustration, explained how it created new hazards, then:  "Crash, bang, boom.  Accident... I mean, it's the stupidest idea ever, there's gotta be a better solution."

Other councilors from the public safety committee who spoke showed an amazing lack of knowledge about traffic with 'moving' stop signs and crosswalks, whatever those are.  All but Serna would vote for putting in what was said to be 8 diagonal parking spaces, although a diagram used by City Manager Mitch Foster showed only six spaces.  It was noted that six cars could easily fit using parallel parking.

When it was striped almost immediately after being approved, there were actually seven spaces of diagonal parking made, I observed many near-misses and plenty of confusion on Labor Day weekend exacerbated by the lack of visibility at that corner created by the new parking scheme, first on Friday, then Saturday.  As you may suspect, that traffic hazard will continue through this summer, a self-inflicted hazard that will cause an accident very soon, if it hasn't happened already.

I recently paced off the distance from where you could start and stop parallel parking on the 'mini-golf block' and came up with 50 XLFD paces, approximately 50 yards.  I recently noticed a group of six cars and SUVs parked along the parallel parking of James Street and paced the distance between where the first one started and the sixth one ended.  Can you guess how many paces I strode?

It was 39 paces, meaning that a seventh could pull up behind the last one and still cover only less than 46 paces.  This empirically shows that seven vehicles can parallel park on the mini-golf block without any major issue.  One might have been able to extrapolate that from my earlier diagram showing that six cars could easily fit on that block, by showing seven could park there, albeit if the cars are parked relatively tightly (four feet between cars).

The spineless Ludington City Council would never dare to choose common sense from a citizen (or a fellow councilor out of their favor) over the baseless change Police Chief Tim Kozal made to make this area a complete hazard.  But all of these officials are not just dull and dimwitted, they are foolishly not taking advantage of other additional parallel parking spaces in this area.

For they could easily put a sidewalk and at least four more parallel parking spaces on the south side of Ludington Avenue on that block and respect the established curb cuts of Snyder's Shoreline Inn.  They could not only do that, they could put in a bike lane buffer between the parked cars and the two lanes of east-west travel needed in that area, not the four that confuse everyone. 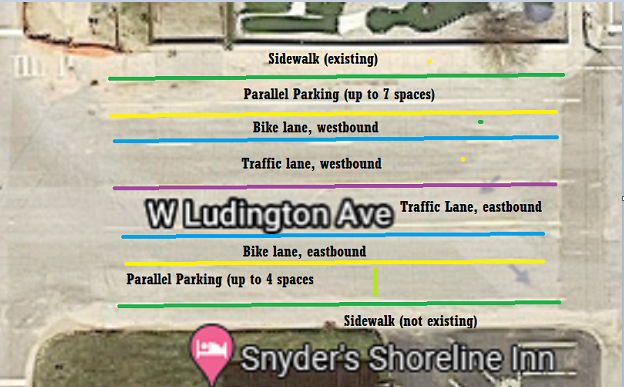 But wise bets like this will be ignored because the traffic engineer (Chief Kozal) would rather create hazards than fix problems and create real additional parking spaces, along with additional bicycle and pedestrian facilities.

Went down to the lakeshore on July 4th.  It would have been chaos if the police didn't block the entrance to Stearns off of M 116 at the end of Ludington Avenue, but it didn't stop a couple of cars from reversing into the park from the end of the avenue.  Recall in this article I said that four vehicles could end up easily parking on the shoulder of the south side of Ludington Avenue without violating Snyder's curb cuts, I got proof of that in the picture below.  City police and deputies were covering the beach, but did not do anything with these cars parking in a place that forced the public to walk in the street, as the blue-shorted guy on the cell phone shows.  If the City would rework and restripe this area, Mr. blue-shorts could be talking on his phone protected from traffic by a curb, a row of parallel parked cars, and a bike lane.  Is that so hard to understand city leaders?

It's just been a long series of brain dead ideas and decisions City officials have come up with and then shoved up the taxpayers backsides. Any 2nd grader would have told them when 50 parking spaces are eliminated there's going to be problems. Covering up the west end with a cement slab that costs the citizens a fortune and eliminating parking that has been a mainstay of the beach since the car was invented was the folly of fools. Many of them still hanging on and pushing their illogical  ideas. Damned fools. Thanks X for keeping track of this on going parking fiasco. If parking is such a problem in the city, why is the parking spaces on half the block on North Rath and Ludington Ave. barricaded off?

And why did they eliminate seven parking spots to create Legacy Park?

There are two competing philosophies guiding DDA-thinking, that's why they often seem to be going in two different directions.  One is 'traditional' post WW2 ideas, such as looking at preserving traffic flow, having commerce done in buildings, and providing more parking.  The other concentrates more on ideals of walkability, placemaking, open commerce spaces, and slowing traffic.  Neither philosophy in practice will be optimal for Ludington, in my honest opinion, so the best course is to figure out the best compromise -- which is difficult when the non-traditional approaches tempt the DDA members to experiment with what may already be working.

I don't see signs that traditional thinking is anywhere to be found in those that rule the roost in Ludington. If anything new comers have wanted to turn Ludington upside down and are trying to make Mason County into something it is not. There are lots of people who want to spend time and money in places that stay relatively the same. They can get all the new fancy amenities back home. Look at the big draws in the area. The Car ferry. A tradition for over a hundred + years. Ludington sand dunes and State Park. If progressives had their way, the dunes would be scattered all over the planet from foundries to sand boxes. The State Park would be nothing but condos and cottages if folks had not stopped the clock and preserved it's uniqueness. Creating new money gobbling attractions will not help. Change can be good if it doesn't destroy what made a region desirable in the first place.

Your perception is quite accurate, Willy, there isn't any apparent sign of traditional thinking in the DDA.  Once someone becomes a member of the club, they have to drop that backward thinking or be ostracized. The traditional thinking they may have had before is sublimated until they eventually disappear, or until they realize the ideas are failing-- at which point they typically resign from the board, or double down if they're true believers.

The DDA would be a lot stronger if they had a little bit more diversity of thought instead of fostering their brand of groupthink.

Interesting last comment "... Fostering group think."  Even one who comes back into a community and has a small history of what has gone on and appears as he might have a chance to give back to the residents or at least appears to start working for the residents (over catering to downtown and tourists and certain business owners), it seems to me, quickly tows the line in group think to get in with the "in" crowd--the "movers" and so-called "shakers."  City hall has become a serious elite clique out of touch with the residents when they get their "big" paycheck and benefits and live a life above the mainstreet and play a fake game of showmanship to keep up with the really big yachters.  The old town mentality to serve the residents has been gone, imo, since JH, JS era and it gets worse with community development which is nothing more than a push for over development for tourists.  Very sad.  And the Fourth Ward Councilor goes along with a blind eye to continue to destroy those who developed the fishing marinas.