The Shaming of Scientific Inquiry

Less than 200 years ago, it was still standard practice for doctors to not sanitize their hands between patients. Ignaz Semmelweis was a Hungarian physician working in the maternity ward in Vienna who noted that puerperal fever was contagious—students and physicians were performing autopsies and then contaminating new mothers in the maternity ward with what Semmelweis termed "cadaverous particles".

At the clinic in which Semmelweis's hand-washing policy was implemented, the puerperal fever mortality rates dropped 90% in fewer than 6 months.  Yet his ideas were by and large rejected by the medical community, who eventually institutionalized him in an asylum just for strongly advocating for what we all now know is sound practice due to advances in germ theory. Those who upset the orthodoxy of the times with a new scientific theory often encounter resistance among other scientists or society itself.  The father of the scientific method, Galileo Galilei was himself persecuted by the church for his views, but in recent times scientific innovation and inquiry have often been attacked or belittled as heresy by scientists content with the established orthodoxy.

In the medical field, we have many examples.  Gregor Mendel's extensive experiments in heredity were initially rejected by the scientific community because they not only flew against the accepted theory at the time, but also because he was just a simple monk from a provincial town without letters after his name.  Balloon angioplasty was initially scoffed at by leading specialists in the field as a procedure that would never work back in 1976, today it's the fourth most often performed surgery.

Scientific breakthroughs are not made by technicians unwilling to look beyond the textbook and those who conduct experiments that just confirm the established theories.  They are made by those visionaries who consider things beyond the norm and use the scientific method to prove their point. 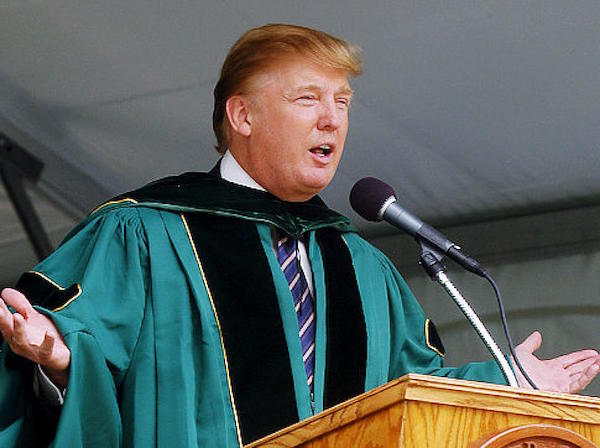 With that in mind, let's look at somebody whose name isn't normally considered among the great scientific minds of our time, Donald Trump, the President of the United States.  Over the last five weeks, he has conducted daily press briefings using some of the top talents in the medical field to educate the public on the Coronavirus, and to give himself some visibility as a transparent and caring leader-- which doesn't hurt him considering that it's an election year.

The briefings are attended by a White House press corps who ask questions of their choice to the panel of speakers assembled for the day.  In their attempt to get headlines they often ask odd or technical questions, Trump will often let the experts field the latter.  On Thursday, April 23, the press corps was not even in question-asking mode when he made the following comments, which has been widely discussed and widely distorted:

President Donald Trump:  "Thank you very much. So I asked Bill a question that probably some of you are thinking of, if you’re totally into that world, which I find to be very interesting. So, supposing we hit the body with a tremendous — whether it’s ultraviolet or just very powerful light — and I think you said that that hasn’t been checked, but you’re going to test it. And then I said, supposing you brought the light inside the body, which you can do either through the skin or in some other way, and I think you said you’re going to test that too. It sounds interesting.

Right. And then I see the disinfectant, where it knocks it out in a minute. One minute. And is there a way we can do something like that, by injection inside or almost a cleaning. Because you see it gets in the lungs and it does a tremendous number on the lungs. So it would be interesting to check that. So, that, you’re going to have to use medical doctors with. But it sounds — it sounds interesting to me."

His ruminations over UV light and injecting disinfectants, was roundly belittled by the press that day and in the next day's headlines.  It definitely spawned a cottage industry of memes and political cartoons involving Clorox, Lysol and tanning beds, by those wanting to make the president look like a buffoon.

But the political pundits and Trump detractors may want to reconsider their own biases, their own ignorance, and look at what was said and whether the theories he floated were worthy of being explored scientifically.

First off, he uses the word supposing twice when referring to his thoughts of whether UV light could be administered internally to fight the virus.  This was a hypothesis he was making, and one that actually does have some historical backing.

In Michael Hamblin's 2017 research article, "Ultraviolet Irradiation of Blood: “The Cure That Time Forgot”?" he notes:  Ultraviolet blood irradiation (UBI) was extensively used in the 1940s and 1950s to treat many diseases including septicemia, pneumonia, tuberculosis, arthritis, asthma and even poliomyelitis.  However with the development of antibiotics, UBI use declined and it has now been called “the cure that time forgot”

The process of Emmett Knott, a Seattle based doctor was to circulate 5-7% of the patient's blood through his irradiator which used UV light to kill the bacteria, then infuse that treated blood back into the patient.  He had clinical success using dogs with staph and strep infections, and was eventually used successfully for the same problems and others in humans.  The procedure worked on bacteria, but the ease of using antibiotics made the procedure disappear.  Why couldn't it work on viruses too?

As for injecting disinfectants, this has also been a tried and true medical method used in the past that has been replaced by something more convenient.  Look what we have here, an April 10, 2020 article on MSN that starts off saying:

Hydrogen peroxide (H2O2) appears to be another potential treatment for COVID-19. Health experts said the compound could help prevent virus from spreading across the body and from causing damage.

Experts said inhaling the vapor using a nebulizer has been the most convenient to receive hydrogen peroxide to fight viral infections. The microscopic mist can easily reach deep into the nostrils, sinuses and lungs, which are commonly affected by respiratory diseases like COVID-19.  “Effective hydrogen peroxide nebulization quite literally, ‘chops the head off of the snake,’ and the virus present elsewhere in the body can then readily be mopped up when the new virus influx has been terminated.”

If you're in the White House Press Corps, one that actually believes the mainstream media, or somebody who actually listened to his words and figured that you need to shoot up some Clorox, hydrogen peroxide is a first aid antiseptic which has been proven to fight COVID-19.

Publicly-shamed President Trump is a true visionary, a heretic; his detractors on these points are among those who would stand in the way of scientific progress.

Permalink Reply by Freedom Seeker on April 27, 2020 at 5:04am
There is just no pleasing the opposition when it comes to Nancy "eatin-icecream" Pelosi and the the democrats who may be backed by Hillary who just won't give it up. No respect anymore for the Office of the President. When Nancy Pelosi is gone there may be some hope to work together in this nation.

Pelosi is rather irresponsible being that she's only two heartbeats from the presidency and claiming the next day that the president is wanting people to inject Lysol into their lungs while saying he rejects science:

But she had got on the house floor the previous day and wiped her runny nose with her finger and then fingered the podium, maybe somebody should explain to her the theory of germs and their transmission:

She is such a liar. What is going to happen in 4 years when Trump is not around. We're doomed.

Permalink Reply by Freedom Seeker on April 27, 2020 at 5:40pm
Good way to put it, X. I never heard the "two heart beats away" phrase, and that reality is much more frightening than the coronavirus at its worst...she should carry her personal bottle of lysol to the podium. Disgusting without fake news...Screaming Icecream Pelosi.

No matter what Trump says the media will put a negative spin on it. Interesting topic X.

I see on the news tonight that China  said Pepcid has been used in some cases with covid 19 with good results. The news was all over that. Now if Trump came up with that , the news would have been ,HOLY CRAP what is he thinking, that's  for  stomach indigestion. he shouldn't be saying things like that bla bla bla .

Oh look, a promising new treatment using ultraviolet light radiation inside the body to disinfect and counteract COVID-19.  Though this should more than vindicate Trump's statements about such a treatment, I'm confident those who have a hobby of bashing Trump will note that the treatment originated in Russia and points towards further collusion in the 2016 presidential race and more to come in 2020.

I can see a possibility for cancer treatment as well.