Back in February 2011, Ludington Police Chief Mark Barnett, City Manager John Shay and City Attorney Richard Wilson drafted what they called the Workplace Safety Policy and had it passed unanimously without discussion by the Ludington City Council.  The WSP allowed the city manager to ban anybody from public places without any sort of administrative due process, and threatened misdemeanor trespassing charges for violators.

The day after it was passed, the city manager invoked it upon me, claiming people at city hall felt threatened while in my presence when I came to view public record (FOIA) requests.  It was found out later that the Community Development Director Heather (Venzke) Tykoski had submitted a memo to the city manager claiming some neighbor had saw me walk by her house acting suspiciously the morning after the policy passed.  I had definitely not, but I had written some articles  on this very blog about some unethical acts that Heather had perpetrated as a public official, with full evidential support from public records.

I would remain banned from the city hall and police station for 14 months until City Manager Shay figured the federal lawsuit I had ultimately filed against him and the City might go better for him if he dropped the unlawful sanction that kept me from attending public meetings and inspecting records at city hall.  The City's indiscretion cost them tens of thousands in legal fees and $15,000 paid directly to me, not to mention a reworking of the WSP to make it less abhorrent to the public's civil rights. 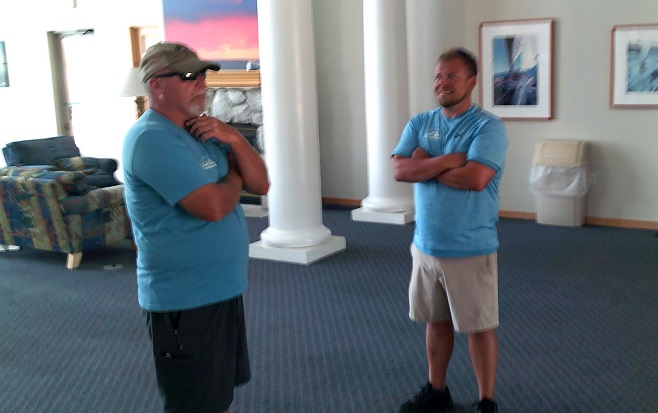 Ten years later, earlier today, the City of Ludington once again banned me from attending a meeting under the threat of being arrested for trespassing.  It was less direct of a threat on my civil liberties as before but here's what happened.

This summer, the City had its first year of operating the Harbor View Marina, a marina which had been ran as a public-private partnership until 2020.  The private entity left prematurely leaving the privately-owned parts of the marina to their lessor, the State of Michigan.  This included the clubhouse and swimming pool.  When the State decided to make the facility totally public, by leasing the marina to the City, both public entities figured that they could keep those two now-public facilities private-- meaning that they could exclude the public from using them.

Despite clauses in the contract that supported the general public being able to use the marina (above), and clauses in the Fourteenth Amendment in the Bill of Rights that disallows the government from discriminating against classes of people, I tested their policy held over from when the pool was privately owned, and went swimming.  My article made them wary, and I was caught the next time I went swimming and sent away rather rudely by Marina Manager Jim Christensen and one of his lackey assistants.  I broadcast my intention to go again after reiterating the City's unconstitutional policy, and was once again asked rudely to leave.

I did, but not before I called the police, documented the incident, and clarified the City's stance with the City's own police incident report.  After Sergeant Wietrzykowski pointed out Christensen's authority at the marina and hearing his desires, I was told that I could be arrested for being in the fenced in area of the pool or in the clubhouse.

Ergo, I was once again excluded from a public facility that my tax dollars fund at the whim of a government management official.  Feel free to argue that I could swim in the pool if I leased a slip, and tell it to the Harbor Front condo owners who are allowed to swim there without a rented slip.  Feel free to argue that the condo pays a nominal annual fee to the City to use the facilities, and tell it to the citizens of Ludington who pay a much larger fee to recoup the taxes lost by making the marina public and exempt from taxes.  We all pay for that pool we shouldn't be banned from using it just because we don't live in the 'right' place in Ludington or own a boat.

If I ever enter the clubhouse area I run the very big risk of being arrested for a misdemeanor (it doesn't even matter if I did rent a slip or do a timeshare at Harbor Front) but City policy also means that the general public will also be kicked out of the marina facilities and could be arrested if they don't fall in those two classes.  This brings us to the meeting that was held earlier today, as noticed at the City webpage part of that meeting was held at Harbor View: 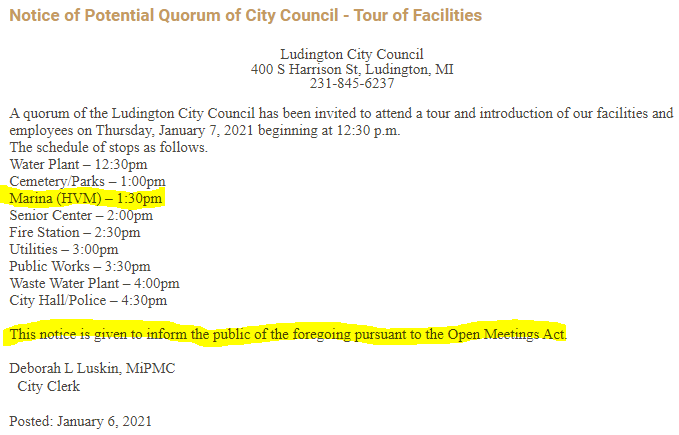 I went to Harbor View Marina at 1:20 this afternoon, observed five people (masked, naturally) enter the clubhouse for this meeting, I walked in outside 'safe' areas during the next half hour, fearful of being arrested if I went in and attended this official meeting.  I observed five people exit the building.

The City of Ludington not only violated the OMA by not meeting at a place open to the general public, but violated all of our basic civil rights by threatening us all with arrests for the misdemeanor of trespassing if we chose to attend.

Permalink Reply by Freedom Seeker on January 8, 2021 at 10:30am
So, what the difference between or legally constitutes a "public meeting" from an "Invitation to Tour Facilities and Meet Employes" (with a one-day public notice) or a city council Strategic Planning Meeting in local Brewery? It's obvious that the public wasn't invited any more than they were to the marina swimming pool or the brewery.

Sec. 2(b) of the OMA defines a 'meeting' as "the convening of a public body at which a quorum is present for the purpose of deliberating toward (or rendering a decision on) a public policy."  According to the CM's report shown below from the 1-11-21 councilor packet, four councilors (Winczewski, Terzano, Cain, and May) attended these tours, the public notice indicates that public policy was likely to be discussed in the half hours at each place.  In their defense, the city clerk did post the internet notice 19 hours before the meeting, thereby complying with timeliness of public notice. 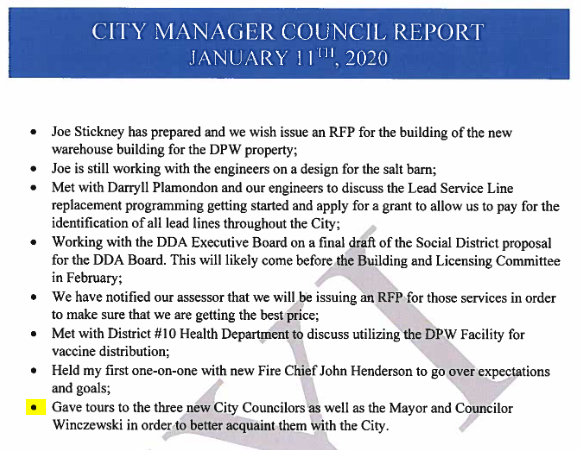 Permalink Reply by Freedom Seeker on January 9, 2021 at 7:47am
Thanks, X. So I guess there should be minutes of these discussions (deliberatons)? But still, not allowing the public in doesn't seem right. Did you actually try to get into the Marina, or just stand back on the sidewalk, because you have been told that you could be arrested for going into the Marina building?

I'm not an attorney but it seems to me that the incident report is wrong about some of the information. The description should not have been trespass. You called the police because you were being forced to leave publicly owned property, that was in fact open to the public. I don't know the legal term but the description should have been harassment or some sort of offense by Christensen against you, because this was an illegal act perpetrated by a City employee against a Ludington citizen. You should have been shown, in writing, the ordinance under which Christensen had the authority to order you to leave the premise. Unless you were causing a disturbance, Christensen had no legal right to cause you to vacate the building. This should be a case prosecuted by the City attorney against Christensen. You were not causing the problem, Christensen was. This would be no different than the the beach patrol telling people to leave Stearns beach because only people who live on Lakeshore Drive are allowed to use it. I think this is a very important point you are trying to make and I appreciate your efforts.
It seems to me that this would not have been considered a meeting if this was only a tour of City facilities. If the OMA did consider this a meeting then they actually had 9 meetings.
When is the last time they had a tour of City facilities for the citizens and taxpayers?

Thanks for validating my perspective, Willy, and I should mention that the new city attorney, Ross Hammersley, thought otherwise in his advisement.  If Covid-19 hadn't ruined the whole court system, this would have likely been taken to federal court already as an infringement of my rights (not to mention the rest of Ludington citizens who subsidize this exclusive, private-acting, marina).

In replying to FS I mentioned the legal definition of 'meeting', the public notice generated indicates that it was considered to be more than a social gathering/tour with potentially a quorum of councilors.  I think whether there was nine meetings or one meeting at nine places is a debatable topic and that I would agree with you, but it does not change the basic idea that one meeting (or 1/9 of one longer meeting) was held in a place that city policy deems forbidden to the general public, unless they have a city marina slip (most don't in January).