On Wednesday, August 30th, it was a hot and humid, though mostly cloudy day, and I decided to go down to the beach around 4 PM.  I did the usual things you might do at Stearns Park in the city of Ludington, walked out to the lighthouse walked down the beach, looked at the new veteran's memorial.  Saw a few people out in the lake where the water was still warm.  And though I kept a watchful eye open for the next two hours, I never saw anyone from the beach patrol at any time, nor their iconic beach patrol vehicle. 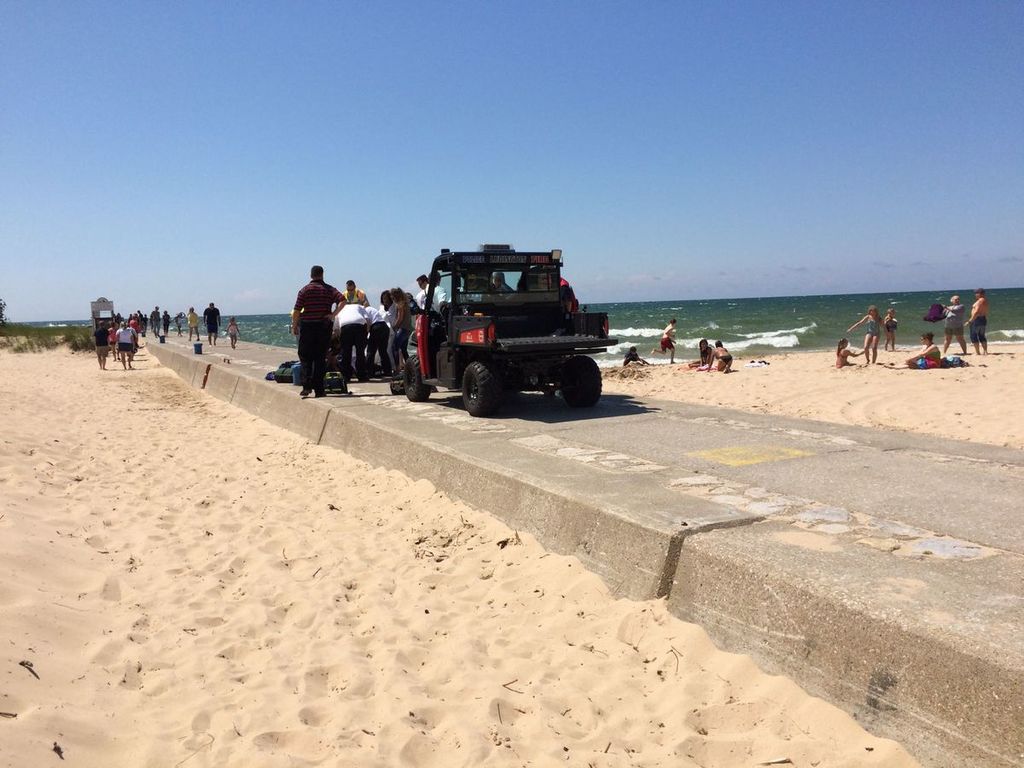 (file photo) At the time they received their newest ATV for patrolling the beach, courtesy of a generous donation; City Manager John Shay said "The vehicle is used by the Beach Patrol and also provides public safety personnel with quick access to hard-to-reach area, such as the north breakwater."

Two days earlier, at the end of the August 28 city council meeting, Shay would tell us about what happened with a couple of DPW workers and a 'golf cart' on that breakwater:  "...our DPW was out on the north breakwall, replacing the life rings and so forth, they were out on a golf cart, and to make a long story short, the golf cart ended up in the lake with one of our employees, who fortunately was not hurt, and the golf cart has been removed from the lake by Abrahamson Marine."

I found myself down at the beach again the next afternoon on Thursday, at roughly the same time and for nearly two hours, I was on the lookout for the beach patrol, but never found them.  Those I asked who may have been down there for awhile hadn't seen them.  Thursday featured mostly cloudy skies once again, however, it was warm and wavy.  Nobody was venturing out to the lighthouse, because of the waves were crashing perpendicularly to the breakwater from the northwest and spilling out over the top regularly.  Some people were in the water enjoying the wavy waters.

Now this is the beginning of Labor Day weekend, one of the times during the year when people visit Ludington in droves to get in their last bit of summer.  The job description of our beach patrol has 11 Stearns' Beach-specific duties and says "members of the Beach Patrol will be assigned a 5-day per week seasonal (May thru August) work schedule based on the hours of 11 am to 8:00 pm."

Today, Friday, September 1st, the beginning of what looks to be a busy Labor Day weekend, beautiful weather and just above 70 degrees, I went to the beach shortly after noon.  I went up and down the whole patrol area twice.  No signs of the beach patrol.  I went away and came back after 1 PM and still there wasn't any patroller there.  Three days in a row just before the Labor Day weekend, where I did my own patrol, without a patrol officer in sight at any time.  The beach doesn't even show any recent, usual telltale tracks of their vehicle.

Now nobody from the city wants to elaborate on the story Shay told at the end of the meeting, a call to Abrahamson's Marina I made where I left a message to call me regarding the incident, was not returned.  It is likely the DPW workers may have borrowed the ATV of the beach patrol in order to do what Shay said, and somehow went off the edge in a non-emergency situation.  You don't see DPW generally driving golf carts through town, I've never seen them do that.

So, if I were a betting man, I would bet you that the beach patrol's ATV was the one that went into the water, and would bet you why the beach patrol has been absent the last three or more days is that their waterlogged vehicle is getting serviced, and they've been given an early retirement from the police chief, who has shown he cares little about water safety in the past, and more about revenue generation through parking tickets and intimidating children at the skate park.

Two DPW workers followed Shay's directives for 'quick access to hard to reach areas', and because of that the taxpayers may have to replace this new vehicle, and may still be liable for medical costs of the employee who messed up.  Shay tells his story to city councilors in front of many other city employees in the audience, and nobody questions the policy of using the ATV (against the city laws and explicitly stated in the sign going out to the lighthouse saying "no motor vehicles") to do routine maintenance, rather than for an emergency, which would be lawful.

Because the rescue of the vehicle was costly, the repairs of that vehicle may be costly, and the potential medical costs involved with the person who fell quite a distance may be very costly, the city manager introducing it more as an afterthought to deflect the implications if this was uncovered by the media, and the official inaction noticed at the meeting, I have asked for everything the city has created in response to this incident through FOIA to get a fuller story.

And I believe they were using the GC/ATV to carry the very heavy life rings... there must be what, several dozen life rings on the breakwall...?

Brad, the gold is on our downtown wayfaring signs, the lead is in the city pipes and in the city water, the life rings are light enough for a young kid to throw out in the water.  Likewise, you're off by a factor of twelve or so on the amount of life rings out on the breakwall.  You need to be closer on your estimates or I'll have to start believing that you're being facetious, LOL.

In light of this situation shouldn't the operator of the "golf cart" have been given a field sobriety test?

Did they deploy a life ring in order to save the "golf cart" driver? Would be ironic if they did.

Will the city be sending "golf cart" operators out of town for special training?

Will they require a special "golf cart" endorsement on their license?

What effect will this have on the city's insurance rate?

Is it standard practice to resupply life rings only before major holidays or do they do so continuously during the summer?

I've got many similar questions to yours, shinblind, including whether the lake was befouled with gasoline or oil from the 'golf cart'.

Kind of ironic that Councilor Katie Moonbeam lies awake at night fretting about the Line 5 pipeline over a couple of hundred miles away, so that she leads the City into a silly meaningless resolution, but when one of her own peeps violates the law and drives an unclean motor vehicle into the water, undoubtedly spreading oil into Ludington's pristine waters, if not gasoline, brake fluid, rear axle fluid, battery fluid, etc. from ruptures that may have occurred, she just giggles.

It's easy for Shay make lite of the situation but that so called  " Golf Cart " cost us tax payers about $15,000 bucks. Now the repairs are going to cost probably a few more with the retrieval from the lake .  I hope they fire the a$$ holes  but knowing how Ludington government works they probably will get promoted into the full time police force.

According to your post X, and the link you provided, the Beach patrol is not working during the month of September which is surprising since the Labor day holiday is a September occurrence. It seems to me that the Beach Patrol should be at their post thru the Labor Day Holiday in order to at least give the appearance that the City is concerned about saving any potential drowning victims.

Exactly right Willy, and I also went down to Stearns Park today and witnessed the same thing, NO BEACH PATROL anywhere in sight, yet, quite a few beachgoers were around swimming. Beach Patrol is a joke to begin with, and now to end with also. The cost just to remove that golf cart is probably around $2 grand, plus another $2 grand to repair it, IF it's repairable at all.

The city should start constructing their snowfence barrier the day the beach patrol ends.

Let both the fudgies and locals know they are no longer welcome to Stearns Park until next year.

Pluck the Petunia's too while they are at it.  Hmmmm. Maybe that could  another beer tent celebration?

Come to Ludington to get Plucked.

Save that for the weekend color tourists.

shinblind, please don't push it, that snowfence is going up soon enough, probably just like recent years, in a short 10 days or so, as well as the petunias they quit watering from here on.

Today when passing through Stearns Park mid afternoon can you guess what I saw?  No snow fence yet; I saw a beach patrol guy alongside his ATV.  They apparently aren't mothballed yet, but it seems odd that they were absent for four days leading up to Labor Day's Eve.