Ludington's Interim City Manager Steve Brock made a couple of revealing statements at the end of the January 14, 2019 Ludington City Council meeting in response to my two public comments at that meeting.  The first comment I made let the city council know that their mostly-closed meeting held on the 10th seems to have been unlawful, and offered a challenge to Steve Brock to prove once and for all that too much of Ludington's water customers face issues with lead dissolved in their water. 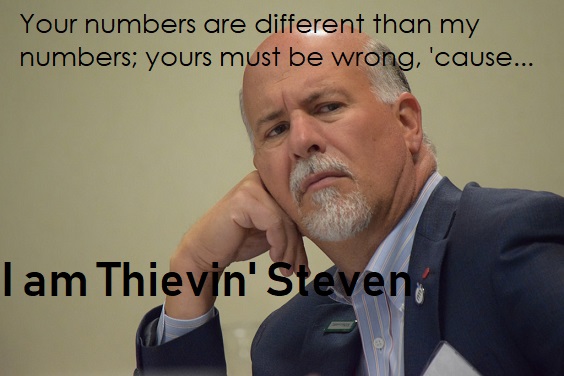 He ambiguously accepted the lead challenge in his own meaningless way by saying that he will test it by taking drinks of it; since he didn't decline the challenge, I sent him proposed steps for it earlier today (and it will be shared with our readers should he accept or decline it).  But the second comment I made elicited responses from the city manager that should make you be able to graduate Lyin' Steve into a new stsatus of tax-thievin' Steven.  The video will be shared when it becomes available, but my second comment went thusly:

XLFD:  "The second thing Steve Brock brought up was about the compensation study's finding that the Hudsonville City Manager did not receive the $68,000 salary for 2018 which the city's budget has in black and white, but a figure more than $42,000 times that figure, claiming it came from different funds in that budget. Beyond fringe benefits, which weren't considered in the study since Ludington has such an incredibly high rate of benefits, I could find no other wage compensation given to the Hudsonville city manager. Hudsonville will pay their city manager, part-time assistant city manager, and cover all managerial expenses with only $131,000 total in 2019, whereas, Ludington is slated to pay $337,000 for the same package.
Truth is Hudsonville has only a few hundred less taxpayers than Ludington, and has a median family income almost $20,000 more than Ludington, but they will pay $206,000 less for city management expenses than Ludington will. If your copy of Hudsonville's budget says anything different, Mr. Brock, show it to all like I have done twice already on my blog.
And while you are at it, check your own budget. The council voted to pay the treasurer $53,560 in wages at the last meeting but the budget says over $80,000 is to be paid in wages to the city treasurer, complete with a proportional jump in benefits, with nothing in the budget notes declaring why the difference exists. Before Mr. Brock leaves he should tell us who exactly is getting this money, and why he thinks it is proper to put it in the budget this way."

There are only three sources saying that the Hudsonville City Manager is making nearly $111,000 in salary:  Mark Nottley (who was given $17K by the City for a compensation study that wasn't based in reality), his bogus study, and the city's temporary flim-flam man, Lyin' Steve at the last two meetings.  He inferred in his response that I hadn't the skill to find that in the budget, where his salary for 2017/2018 is $68K and change, but he wouldn't tell where that extra $42,000+ was hiding at.  I will present the latest Hudsonville City Budget once again, can somebody please find the city manager that $111,000 in salary?  It just ain't there, someone took it, someone crooked.  It might be Mr. Brock, but that suspicion alone doesn't give him the Thievin' Steven moniker.

He's taking money from us and giving them to a non-existent deputy treasurer.  For Thievin' Steven replied to the last half of my comment by claiming that the additional money was going to the deputy treasurer.  Problem is--- there is no deputy treasurer.  Let's review the data.  First here is the budget which was placed on the city website after it's ratification.  The notes indicate there is no additional city offices planned to be created in this budget, but it has the salary for the treasurer jumping from $50,600 to $87,000, that's and extra $37,400 in salary alone, and a jump of $22,600 in fringe benefits.

Treasurer Tom Ezdebski received a pay raise in December by ordinance at the 12-17-18 meeting up to $53,560 leaving a smaller $33,440 deficit in the salary of treasurer that, according to Thievin' Steven, is going to a deputy secretary.

But, as you can tell by the budget numbers, we haven't had a deputy treasurer in 2016, 2017, and many years before that.  In the December meetings of 2015 and 2016 where the former treasurer's salary for the next year was set by ordinance, they roughly equal the budgeted amounts at $51,357 and $52,127 respectively.  There has been no deputy treasurer position serving at city hall for awhile, except for Tom Ezdebski, this last summer, who was appointed at the June 11 meeting:

"The City Treasurer [Linda Rogers] is asking City Council to approve the appointment of Tom Ezdebski as Deputy Treasury for the period from June 14, 2018 to July 15, 2018. This would allow Tom to sign any necessary documents and carry out the functions and duties of the Treasurer until his appointment begins on July 16, 2018... City Attorney Wilson reiterated that the term that Tom Ezdebski will serve as Deputy ends after July 15th, when he becomes City Treasurer. Motion Carried."

So there had been no deputy treasurer position until it was formed for Tom to learn the ropes, and that position finished on July 15.  The process the city used in June was proper, and came from what the city charter says in section 10.3:  "The Treasurer may, subject to the approval of the City Council, appoint a deputy who shall possess all the powers and authority of the Treasurer, subject to the control of the Treasurer."

Thus, once Tom Ezdebski assumed his role as City Treasurer, and ended his role as Deputy Treasurer, the only way a new deputy treasurer could be installed would be for them to go through a process where the city council would have to approve the appointment.  Furthermore, if this was to be a full-time position replete with benefits, as Thievin' Steven's current budget indicates, it would be unlike the position has ever existed in the far away past of Ludington's history.  That same section in the charter says the deputy treasurer "shall be paid for his or her services by the Treasurer unless otherwise provided by the Council".

But here is what we have.  The council since July has not affirmed an appointment by Ezdebski of a deputy treasurer.  They have not established that the City would pay for a full-time deputy treasurer they never approved of, rather than have Ezdebski pay the deputy.  If you had no luck finding the city manager of Hudsonville's salary to be $110,000+, you will also have no luck finding any discussion of a deputy treasurer by the city council since that June 11, 2018 meeting.  Not even at the committee level.

So since these folks knew the process in June, 2018, there are two possibilities here.  Either the council has 'voted' outside of an open meeting (with Thievin' Steven's blessing) to approve a real, appointed full-time deputy treasurer and approved paying them (violating the OMA, once again), or Thievin' Steven has created a phantom deputy golden parachute for himself for the bother of managing Ludington.  Spend it well, Thievin' Steven in your retirement.

Your arguments and presentations of facts sound pretty convincing, X.  This is again troubling, mainly due to the fact that ICM Brock does not make clear to the public where the "other" Hudsonville figures equalling the higher city manager salary are shown.  This then would prove the $17k compensation and wage study as fallible.  This appears to be another waste of taxpayer money on overloaded salaries and wasted studies.  Maybe you can sit with/or get in writing from Brock and/or the new mayor and get some real answers.

I'm not very good with numbers and spread sheets so I am wondering whether the money requested for 2019 was approved?

If so wouldn't the City Treasurer be responsible for it?  Do you happen to have a more detailed sheet that breaks down who received what from the Treasurer's piece of the pie?

I have not read this entire post, but didn't Brock's term as ICM only last until 12/31/18? Why is he even there anymore now? He should be out of state in winter vacation status, right?

I have a variety of records requested through FOIA including any payroll records of this mysterious phantom figure known as the Deputy Treasurer of 2019.  Mr. Brock has conveyed after the meeting that he now wants to call it an 'Assistant Deputy' instead, but it doesn't matter whether you call it a rose or a skunk, there has been no new official approved by the city council for the treasury department.  Thus over $50,000 in wages and benefits is going to some phantom who is believed to go by the name Teresa Harrington.

The new Treasurer Tom Ezdebski has been praised at recent meetings, yet for some unexplained reason he needs a full-time assistant to do the job that former treasurer Linda Rogers did by herself during her tenure?

Is Steven Brock able to demonstrate where and how the City Manager of Hudsonville is receiving this hidden salary?

Since this is a serious breach of ethics to say nothing of being criminal is Steve Brock somehow culpable in this knowledge?  Does Brock know where Hudsonville's CM is kiting funds from the budget and channeling them into his own pocket?

Could this be easily resolved by publishing  a tax return? Or a phone call to Hudsonville?

Is Steve guilty of slandering the name of Hudsonville's CM by openly and wantonly making fictitious statements.

Or is this another Crock of runny drivel that Brock hopes the locals of Ludington will be as willing to swallow as the regional media and the city council.

Steve broke it down for me in an E-mail:

Still can't find any of those numbers in the budget, or any justification, but I have got some 'outside' documentation that is helping me figure out the Hudsonville mystery.

Sounds like Thievin' Steven is trying the ole city council "Force Manure" maneuver on ya there X.

The just released packet acknowledges that Steve Brock will be stepping down as Interim City Manager next Tuesday and that current Assistant City Manager Jackie Steckel will be appointed to the position of 'Acting City Manager' until such point the new city manager is seated. 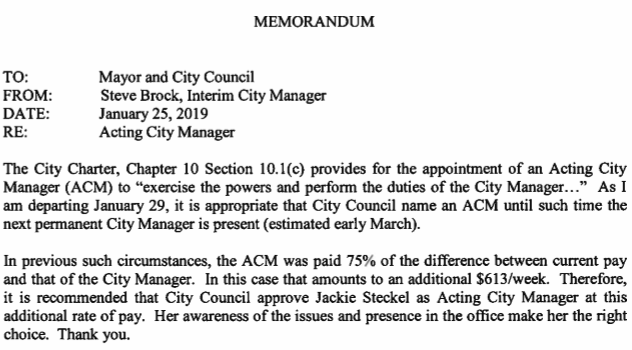 X, you understand these City Hall mumbo jumbo messages better than most people. Can you please explain what  the following quote means,"the ACM was paid 75% of the difference between current pay and that of the City Manager". Thanks

Don't know nothing about Steckle. Was she ever in the running for the city manager s position? Seems like they would hire from within the city ranks unless she is just a glorified secretary that is getting paid $53,000 plus bennies a year